A Conversation with Masta Ace of eMC 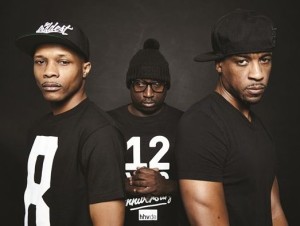 Masta Ace is one of the most respected emcees in Hip-Hop. The respect from his peers and from fans stems from not only Ace simply being dope, but because of his sustained originality and creativity. With each project he pushes the boundaries of what Hip-Hop is “supposed” to sound like and continues to build on to his already rich legacy.

Ace’s latest project is the third release and second full-length album of super-group eMC called “The Tonite Show”. Masta Ace alongside Wordsworth and Stricklin created a concept album that finds the trio preparing for an appearance on The Tonite Show with Jimmy Falcon, played by comedian Russell Peters.

Masta Ace recently  spoke to The Real Hip-Hop about his longevity in Hip-Hop, his battle with Multiple Sclerosis, his future in the world of rap, and his new album with eMC, The Tonite Show.

TRHH: Who came up with the concept for The Tonite Show?

Masta Ace: I came up with the concept but we as a group came up with the title. We said we wanted to have “show” in the title. We had about 6-or-7 different titles for the album with the word “show” in it and “Tonite Show” was one of them. Once we looked at all the titles “The Tonite Show” lent itself to a really cool storyline, better than the other ones. I had a rough idea of where I wanted to go with the storyline and once I told them they were all in and ready to go.

Masta Ace: That was produced by KIC Beats, a really talented producer from the west coast. He also produced our other single “Fly Thoughts“. He’s also in the studio with me producing my whole entire next record. He gave that beat to Wordsworth and Words brought the beat to our attention without a concept initially. I looked into it and when I started writing the rhyme the whole zodiac sign thing came to me. I did my verse first and played it for them then everybody decided to split up the verses and mention every single zodiac sign. It’s a nice cool love story flirting with the ladies or whatever.

TRHH: You have a long history of having creative concepts from ‘Me and the Biz’ ‘till now. Do you ever hit a creative wall and struggle to find new concepts?

Masta Ace: I’ve never hit a creative wall but you’ve gotta remember something, there is long periods of time in between projects. If I was trying to crank out 2 or 3 records, mixtapes, or albums a year where I had to come up with concepts for each record then I might hit that wall, but my projects are spread out pretty good. Disposable Arts was 2001, Long Hot Summer came out three years later, MA Doom came out several years later, A&E was mixed in there, and eMC’s first album was mixed in there. The projects are spread out enough so that by the time it comes around to new music getting ready to come out I’ve already started to think about new ideas, new concepts, and a new way to entertain people, so I haven’t hit that wall because of that reason.

TRHH: You’ve been around for over 25 years. To what do you attribute your longevity in Hip-Hop?

Masta Ace: I attribute it to being a fan of this music. When we’re on the road as a crew Stricklin’s always playing new music, Words is always playing new music, and we listen to all the new stuff that’s out there. I get the chance as a creative emcee and a writer to feed off how cats are spittin’ now. I don’t try to copy what they’re doing but it keeps my mind current in terms of flow, delivery, in terms of stuff that I don’t wanna do, and in terms of stuff that I do wanna do. What I’ve prided myself in is not shutting out the new music that comes out. A lot of cats from my era are so annoyed with the overall sound of Hip-Hop right now that they don’t even take time to sort through the madness and try to find the good music that’s in there. If you’re in that type of a mode and not listening to new music there is a possibility that your stuff is gonna sound dated because you’re not aware of how things are flowing and how beats feel now. For that reason I feel like I’ve been able to be current.

Masta Ace: Ah man, there’s several. One that jumps out at me is I was in Poland one time at an after party and there was a fan there who was super-drunk. He wanted to take a picture with me so I took a picture with him and after I took the photo he wanted to spend the next twenty minutes talking about my music and his music. He was very touchy-feely. He was a big strong dude that didn’t know his own strength so he was grabbing my shoulder going, “Yo, I love you! I love you!” I had to move his arm like, “Yo, relax — chill.” It got to the point I was running around the after party hiding from this guy. I was hiding behind poles, people, ducking, and going to the other side of the room because he was walking around this party trying to find me. His English was not very good and he was super-drunk. I didn’t get to enjoy the after party because I had to spend the whole night being on guard and avoiding this guy.

TRHH: ‘The Monologue’ is produced by Diamond D, how’d that song come together?

Masta Ace: I featured on Diamond D’s album The Diam Piece. It was a song called “Ace of Diamond” and in exchange for that feature he blessed me with this Monologue track. I could have used it any way I wanted to. I decided I wanted to put it on the eMC album because I thought it would be a great energy record for it. We recorded the song, Diamond mixed the song, and while we were out in Brazil for a tour we decided to shoot a video. We met some guys and they had a couple nice cameras. I had a rough concept of what the video could be – one entire shot. We talked about it, mashed it out, and shot it. I don’t know if Wordsworth in particular was a big fan of that song when it was done, but after the video came out and after performing the song live now it’s one of his favorite joints.

TRHH: A couple of years ago you revealed that you’ve been diagnosed with Multiple Sclerosis. How has your health impacted your career?

Masta Ace: What it’s done is really refocused me as an artist. I realize I’m going to have a shelf life in this game. There’s going to be a point where I’m not going to be able to perform the way I want to or travel the way I want to because of the illness. What I really did was refocus myself and I said the next ten years of music that I put out is going to be exactly what I want it to be and it’s going to make the statement I want to make in terms of who I am as an artist. I was diagnosed in 2000 and after 2000 I feel like I put my best music out. I put out Disposable Arts, Long Hot Summer, the eMC album, the A&E album with Edo.G, then I put out MA Doom: Son of Yvonne. Now I have a brand new album coming out this year with KIC Beats. I’m just trying to get this music out there, get my energy out there, and get my words out there so the people can kind of know where I stand in this game. If I reach a point physically where I can’t do it anymore, at least I feel like in the last ten years I made my statement in terms of what type of artist I am and what kind of music I make.

TRHH: How has working with Wordsworth and Stricklin improved you as an emcee?

Masta Ace: I mean Words and Strick are lyrical dudes, talented dudes. If I didn’t think they were talented I would have never asked them to be on my Disposable Arts album or my Long Hot Summer album. Those guys definitely push me to be a better emcee hearing the verses that they lay down. It gives me energy and motivation to make sure that my verses are tight, up to par, and up to snuff with what they’re doing. To me they’re like the young energy and young blood that I need around me to keep me focused and keep me on point.

TRHH: Will there be an eMC tour?

Masta Ace: We’re going to Europe in November for an extensive tour. When we get back from Europe a couple days later we’re going to Australia for another extensive tour. Those will be the two tours to finish out the year for eMC. At the top of the year we’re looking at Canada maybe in March or April when the snow starts to melt. By then the solo records will be out and crackin’. It’s going to be nice and we’ll have some nice momentum by then — stay tuned. The group Twitter is @eMCCrew. The group Instagram is @TheeMCCrew. We have a website called eMCDateWithJimmy.com. Date with Jimmy because we have a campaign now in the works where we’re actually trying to get fans to help us get on the actual real Tonight Show as musical guests. People can go to eMCDateWithJimmy.com and read the mission statement, leave a message, send some words of encouragement, and let us know that they’re down with us and they’re rooting for us.

Sherron Shabazz is a freelance writer with an intense passion for Hip-Hop culture. Sherron is your quintessential Hip-Hop snob, seeking to advance the future of the culture while fondly remembering its past.
View all posts by Sherron Shabazz →
This entry was posted in interview and tagged eMC, interview, Masta Ace, Moopies, Signtology, Stricklin, The Monologue, The Tonite Show, Wordsworth. Bookmark the permalink.