Michael Cardigan: Cloud Club Over Everything 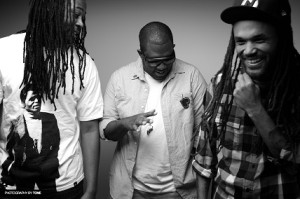 Michael Cardigan, Tommie Chase, and Elete Wright are St. Joe Louis. The trio united in 2010 to create the critically acclaimed De La Soul-inspired album, “30,000 ft. High & Rising”. The group continued to work as soloists and as a crew over the years while preparing for the release of their follow-up album. Their sophomore album “Cloud Club Over Everything” was released for free on July 26 and finds the trio taking their art to a “higher” level.

TRHH: Explain the title of the new album, “Cloud Club Over Everything”.

Michael Cardigan: We started out with the thought of doing open sessions. We wanted to capture that live feeling that you get when you’re in the studio creating. We invited any and everybody that we knew to come by the studio and those turned into the craziest kind of parties. We didn’t even capture everything – of course no video. We started calling it “The Cloud Club” because of course there was a lot of smoke and everything you can imagine that’s on the record. That became the cloud club. It first started out as that idea and then it slowly morphed into a bigger idea about chasing your dreams, putting yourself out there, kind of like how clouds are there but not really there. It became deeper as it went on.

TRHH: Tell me about the single, ‘I Rise’.

Michael Cardigan: The “I Rise” record came about when Nemo [Achida] was in town and we ended up doing a show together and hanging out a bit. It was organic. We actually cut two records with him, but that was the one that fit the sound of this project. We’ve got another great one that we’re going to come out with a little bit later on, on another project to follow this one up. It was a while ago actually that we were hanging out, decided to go in the studio, the clouds got into action and we just decided that we wanted to capture that feeling. We thought it was timely too, considering everything that’s going on with police brutality and violence. It put everyone in that really great mindset to be able to rise above things.

Michael Cardigan: I would say sonically it’s way more evolved. I feel like certain sounds on 30,000 ft. High & Rising were very boom bap-ish. This one has elements of boom bap but it’s not dominated by it. It’s not dominated by any one thing other than us. The first one was really deeply entrenched in that back-to-basics raw kind of sounds ‘cause we were big De La Soul fans, of course. It was an homage to that, but this one feels more like us realized.

TRHH: Why was there five years in between albums?

Michael Cardigan: We put out EP’s in between there. We did tons of shows, lots of connects, lots of building relationships, and behind the scenes sorts of stuff. Elete is now based out of L.A. so a lot changed in between that time frame. He’s working with a label, Family Artist. he’s working on a project with The Ho99o9 and great artists like Azul. There’s just a lot of different things floating out there. A lot of transitional stuff occurred in between there. Then there was a lot of little things that we dropped. A couple of EP’s the St. Joe Lotus, the St. Joe Lotus: Reloaded, and there was another EP that came out with JR and PH7. That was a larger EP called My Favorite Demons that came in addition to, working with Pro Keds. We’re super-excited about that. Now we’re going to be swinging this back around and you’ll be hearing this early, but we got a full-length LP with JR & PH7 called Coral Cadavers. We’re just trying to get the business straight.

Michael Cardigan: There is a Basquiat painting called, “St. Joe Louis Surrounded by Snake”. That crab in the bucket mentality, for lack of a better term, “the haters”, isn’t really what it’s about. When you look at that picture it’s about having tons of voices in your ear and not focusing in on you. St. Joe Louis is really about focusing in on what makes you as much you as possible and putting that out into the universe. Don’t deprive the world of what you have to offer because you’re here for a reason.

Michael Cardigan: Me and Chase decided to work on a project, reaching out for production, and it was just random. We’re super excited about how it came out and there is a bunch more coming. Me and Chase are gonna follow it up with an entire project. We’ve been reaching out to some folks and pulling together production. So we’re hoping to follow that up with a whole entire project or at least an EP. We’re about three songs in, but we just love that record so much we couldn’t hold it. Our core is always going to be straight boom bap-ish because that’s what we love, that’s what we started with – beats and lyrics. We wanted to introduce people to the new sound slowly so we didn’t start with the I Rise record. We started with a record from a completely different project to say, “That’s still in there,” just in case you didn’t think that we were still capable of that.

TRHH: When will that EP come out?

Michael Cardigan: That should be hopefully ready in the next month and a half. We’re specking out titles and all that sort of stuff. Like I said we’re three real records in. We’ll probably end up cutting 7 altogether. We just pulled down some production from this New Jersey based beat collective called FreQ. This guy by the name of Arcade Noise sent us a bunch of stuff that we’re gonna start working on. We’re excited.

TRHH: You guys were close with Pumpkinhead. Talk about your relationship and how his loss affected you.

Michael Cardigan: PH was like our brother. He was the big homie who wasn’t afraid to be vulnerable to help teach you something, whether it was about music, manhood, or fatherhood. He was always willing to be there and be supportive. We worked on a really big project with him called Fabulous Freebird. There is an intro record and the drive crashed so we wanted to put that out so folks could hear where his head was at. He was just such a supreme talent. Everything from the direction that he gave on the battle circuit, to jumping back out there and battling again, to pulling away from the CEO aspect to show them how it was really supposed to be done. That’s the kind of guy he was, really entrenched in the culture, a super-huge spirit, and of course he loved his Jameson [laughs]. He was just an amazing guy. My heart goes out to his family, his children, and anyone who was ever touched by the work that he’s done. We’re proud to have known him. This is the first full-length project that we’ve put out without him. Every project, if he wasn’t on it, he had something to do with it. Whether if we sent it to him ahead of time or he decided to jump on a remix for us. This is the first thing we’re doing with no net.

TRHH: Who is Cloud Club Over Everything for?

Michael Cardigan: I think it’s really to initiate people into a world. When you hear what’s dominating the culture now we wanted to kind of say that we did that, right? A part of what happened with Cloud Club was we started partying and started making records, but the party didn’t stop. The “Party After Party” song isn’t a joke. It was party after party until the wheels fell off. They would last into the wee hours of the morning. There was every bit of everything you could imagine occurring behind those closed doors. The Cloud Club idea is to be able to come out of that. To be able to not let that predominate your life, because that’s not real. That’s the cloud part of it that’s not real. We want to introduce people to that concept that even us, we got into it and got lost but we made our way through it. This is the project to show you how you can transition. That’s why you get records like “Black Cotton” toward the end of the project or “Attention Deficit Drum Disorder” with Fresh Daily where it’s taking elements of where we started and taking it a bit further. And you’ve got stuff that’s real nuanced to now like the Dolla stuff from Brick Bandits that really kind of trap chord sound – moving into that Jersey, beat-club vibe. It’s really about taking all of those elements that make the culture where we come from and expressing it in a brand new way.

Sherron Shabazz is a freelance writer with an intense passion for Hip-Hop culture. Sherron is your quintessential Hip-Hop snob, seeking to advance the future of the culture while fondly remembering its past.
View all posts by Sherron Shabazz →
This entry was posted in interview and tagged Cloud Club Over Everything, Elite Wright, Gold Slippers, I Rise, interview, Michael Cardigan, St. Joe Louis, Tommie Chase. Bookmark the permalink.