Posted on November 6, 2017 by Sherron Shabazz 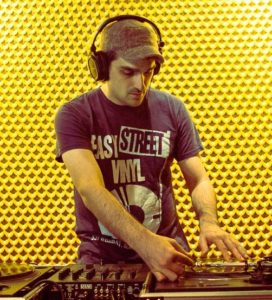 Amerigo Gazaway spoke to The Real Hip-Hop about how he got into creating mashups, what goes into his creative process, and his new album, A Common Wonder.

TRHH: Common and Stevie Wonder are my two favorite artists. There are similarities in their soulfulness, did that make it a no-brainer for you to combine their music for A Common Wonder?

Amerigo Gazaway: Yeah, definitely, man. My partner Ricky and I had the idea a while back, but then when the Black America Again single came out that kind of caused me to go back into the archives, dig it back up, and start working on it. Reinvestigating some of those ideas again led me to creating a handful of tracks, one of which was I Was Made to Love H.E.R. and the other was the Sixth Superstition. Once I had those I felt like I had the beginnings of a project on the way. The intro track also – it was a big moment for me finding that sample of Stevie talking about, “Have we traveled this far between space and time, or is this just the vision in my mind.” It all just kind of came together.

TRHH: How difficult is it to find the little interview clips that you use throughout your albums?

Amerigo Gazaway: Usually it’s pretty easy. That stuff is available on YouTube, documentaries, and radio interviews and stuff. For Stevie it’s interesting, I was looking online and there is not really a comprehensive Stevie documentary that’s been made yet. There are a handful of little videos with interviews. There’s talk show appearances and all that but there’s not a definitive Stevie Wonder documentary, which surprised me. It was a little bit more difficult this time to get some of those soundbites and interview quotes that I was looking for, for the project.

TRHH: Are you a Stevie Wonder fan or did you have to discover some of his more obscure stuff?

Amerigo Gazaway: Both. I was definitely a Stevie Wonder fan, but I also ended up discovering a lot of his more obscure stuff that I didn’t know about. That was a great experience for me as a producer and as a fan of the artist. I was definitely a fan of Stevie long before that. Marvin Gaye as well, and all the Motown stuff. Stevie really fascinated me for the fact that he really embraced synthesizers, technology, and drum machines very early on. He kind of paved the way for Hip-Hip in a lot of ways. I definitely wanted to touch on some of that with the project as well.

TRHH: What was the most difficult song to create on A Common Wonder?

Amerigo Gazaway: I think Sugar By the Pound was the most difficult song to create and that really didn’t have anything to do with the song itself. It was just because the acapella was a do it yourself acapella that I had gotten from my homie The Goodwill Projects. For those that don’t know a do it yourself acapella is basically where you create your own acapella from a track by using a technique of phase inversion. So it’s not perfect. You can get acapellas if you have an instrumental of a song and the actual song you can combine those and they’ll cancel each other out and give you a rough acapella of the track. That’s what we used for Sugar By the Pound. It wasn’t perfect and I had to use a lot of EQ’s and sound design on that to try to get it to work. Musically it sounded great so it was really just a lot of engineering audio that I had to do on that track, which was a little bit difficult. Everything else came together really well. That’s the beauty of a lot of these projects is I don’t have to really force it. When I pick the right two artists it kind of falls into place.

TRHH: How many of them on the album would you say are do it yourself acapellas? Some of them you just found, right?

Amerigo Gazaway: Yeah, some of them just came from places. I got my homie The Goodwill Projects – he creates his own DIY acapellas and does a really good job at creating those from scratch. I have 12 inch vinyl that I have sitting around that I’ll record into the computer and I’ll find some stuff online from different websites like Acapellas4U.com and YouTube. It’s just kind of a hodgepodge of different acapellas from different places. I think there are 2 or 3 joints on there that are DIY acapellas. Most of them are studio acapellas that either came from a 12 inch vinyl or something I found online.

TRHH: How did you initially come up with the concept of blending two artists music for a complete album and not just one song?

Amerigo Gazaway: I don’t know, man. That’s something I’ve been doing since Fela Soul. I was always doing mash-ups before that. Me and my homie used to have a DJ crew called Bebop & Rocksteady and we used to do mash-ups, blends, and video remixes. Fela Soul was the first concept album where I created a whole album combining and reconstructing the beats. I was definitely inspired by The Grey Album with Danger Mouse combining Jay-Z and the Beatles. There is also DJ Wicked from Nashville – he’s another remix artist. He was doing stuff like that at the time that was inspiring too. He did this joint called The Brothers of Chico Dusty with The Black Keys and Big Boi from Outkast. I saw people around me doing it, my homies doing it, but with The Soul Mates I wanted to take it a step further and get down to what was similar between these artists. Why should we connect these two artists? I really wanted to examine that and pick artists that were musically meant to go together and make it sound like they were actually in the studio together when the album was created. That was my goal with the whole Soul Mates project.

TRHH: Have you tried to mashup two artists or groups that didn’t go together?

Amerigo Gazaway: Yeah. I’ve definitely run into some road blocks creatively. Sometimes I can get one or two songs to work, but trying to put together a whole album becomes more and more difficult. You really never know, but you also have to give yourself time to marinate and let the project evolve. Make a track, sleep on it, live with it a little while, go back to it, and take a break. I did that with A Common Wonder several times. I had to take a break from it, step away, and come back to it with a new perspective and then I was able to complete some of those songs that I was stuck on. I try not to give up on the ideas. If I get stuck I just move on to the next thing. I can always come back to it. I’m always working on several different things at once.

Amerigo Gazaway: Two turntables, one of which is working. A Rane 57 mixer, my laptop, a little keyboard midi controller with some pads on it, another little Trigger Finger drum machine pad. Just midi controllers and random instruments. I have an electric bass guitar, an electric guitar that I’ve been playing live on some tracks. I got that around the time I did the B.B. King project. I got inspired listening to B.B. King and wanted to play guitar on some tracks. I got a trumpet and all types of random little percussion instruments. It’s constantly evolving and growing.

TRHH: What software do you record with?

Amerigo Gazaway: I use a handful of software. I use Ableton Live for a lot of my DJ/acapella/warping type stuff. I use Reason for a lot of my drum programming and because they’ve got a lot of sounds that I like. I’ve used Reason for a long time so I’m familiar with their sound bank so I use that quite frequently. I got a Triton LE keyboard that my homie Domo gave me. It’s got a lot of really good sounds in it. But yeah, mainly Ableton Live and Reason are my two go-to programs. I’ve jumped around programs over the years. I used to use Acid Pro, Cool Edit Pro, and all of that stuff. I’ve had a lot of experience with DAW’s.

TRHH: You travel the world deejaying; do people give you ideas now of artists that they think would sound nice together on a mashup?

My partner Ricky is always giving me ideas and feedback, so we’re constantly bouncing ideas back and forth creatively. He kind of helped me come up with the idea for A Common Wonder and the Yasiin Gaye project. I was working on several other projects at the time and he kind of pushed me to work on those two projects. I’m always getting ideas from people and also just digging for records at record stores a lot. That’s where I get a lot of my ideas, just looking at the names, the album artwork, and the liner notes from different albums. That’s something that’s always going to be relevant to what I do.

TRHH: Do you know if Common or Stevie heard the album?

Amerigo Gazaway: I don’t. I haven’t heard anything from either of their camps, but we’ll see. I heard from different artists in the past that I’ve remixed before. It’s always a blessing when the artist comes through and shows love for the project.

Amerigo Gazaway: I’m working on a lot of different projects. I’m working with artists, doing remixes for people, production, and stuff like that. I’m working on an instrumental album. I’m traveling. I’m going to Croatia. I’m staying busy out here in the Bay Area playing gigs. I played a Motown Monday gig the other night – that was fun. Check my website, AmerigoMusic.com for updates on where I’m going to be.

Sherron Shabazz is a freelance writer with an intense passion for Hip-Hop culture. Sherron is your quintessential Hip-Hop snob, seeking to advance the future of the culture while fondly remembering its past.
View all posts by Sherron Shabazz →
This entry was posted in interview and tagged A Common Wonder, Amerigo Gazaway, Berkeley, California, Common, download, free, interview, Stevie Wonder, The Sixth Superstition. Bookmark the permalink.