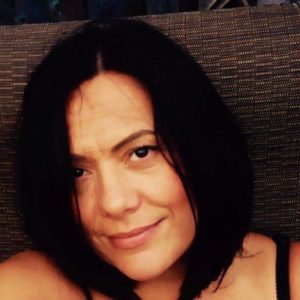 Steph Dash Nash has worn many hats in Hip-Hop. She’s a journalist that has interviewed some of Hip-Hop’s biggest names on Supreme Ultra Radio. She’s the co-host of the Underground Express show on Maximum FM Hip Hop. She’s the CEO of a Hip-Hop inspired clothing company, specializing in apparel for children called “Stitch N Rhyme.”

In the process of creating True Grit Steph Dash Nash was diagnosed with Glioblastoma, an incurable, fast growing form of brain cancer. Steph continues to fight the disease in every way imaginable. Through StitchNRhyme.com Steph is selling Glioblastoma t-shirts. A portion of the proceeds from each shirt sold will go to the Sunnybrook Health Science Center: Gord Downie Brain Cancer Fund.

The Real Hip-Hop spoke to Steph Dash Nash about how she got into production, the creation of her album, True Grit, and her brave battle against brain cancer.

TRHH: How did you initially get into music production?

Steph Dash Nash: I was surrounded by Hip-Hop culture since I was a little girl, and I always wanted to be more within it, I just didn’t really know how. I especially loved lyrics, ones that could leave a visual imprint of meaningful stories but I most definitely couldn’t rhyme. I became great friends with an incredible Canadian producer Big Sproxx during a trip to Jamaica, Queens. I was there to interview Tragedy Khadafi. It was after that trip Sproxx starting introducing me to all elements of music production. He became my mentor.

TRHH: What role did Big Sproxx play in the creation of True Grit?

Steph Dash Nash: Big Sproxx provided me a lot of creative control and pushed me beyond what I believed I was capable of. He played a huge role in teaching me even the basics. The first thing he had me change was my use of the language terminology. He often frowned at me calling the metronome the “ticky thingy.” Sproxx gave up a lot of his work, personal and studio time to work with me. Sproxx stepped in more than half way through the project as a co-producer. Sproxx contributed a few songs he had been working on from his own material and he helped me sequence and arrange the album.

TRHH: You have a lot of heavy hitters featured on the project. How did you go about securing verses from all of these artists?

Steph Dash Nash: I had previously interviewed several artists and producers over the past few years for my website Supreme Ultra Radio. Incredible artists such as Diamond D, Pete Rock, Masta Ace, Tragedy Khadafi and General Steele just to mention a few. After my video interview with General Steele he told me it was a pleasure to work with a professional and to keep going. I approached a few of my favorite artists I wanted to work with and here we are almost three years later. Big Sproxx later added onto this incredible lineup of gifted lyricists.

TRHH: What does your production set up consist of?

Steph Dash Nash: At the studio I work out of there is a wide range of equipment and production gear but for this album all the music was created on an Akai MPC 1000 with a JJ OS update. The MPC 1000 was the first piece of equipment Sproxx introduced me to. I fell in love with how easy the workflow and functions of that machine are to learn. I realized I was able to create the sounds and style of music I loved right there all in one box and never looked back.

TRHH: Do you have a musical background or is the album mostly sample-based?

Steph Dash Nash: Growing up, listening to and falling in love with Hip-Hop music all of my favorite producers crafted their music using samples. That is the sound that has always moved me and resonated in my soul. That is the type of music that me and my partner Sproxx create just like all the great producers who influenced and inspired us.

TRHH: Being diagnosed with a terminal illness is something no one is ever prepared for. You worked on the album while undergoing treatment, what has kept you strong and moving forward during such a tough time?

Steph Dash Nash: Brain cancer has been a crash course in the differences between expectations and reality. Initially, I never wished to know my life expectancy or what kind of Glio it was. Everyone wanted to know but me. I felt knowing that information would cause negativity and put me in a bad headspace. Unfortunately I found out 6 months ago it’s Glioblastoma IV. The life expectancy is 9-14 months. I am going to be a bit vulnerable; actually I haven’t shared this yet. When I found out by mistake I cried every day for two weeks. Brain cancer stole a lot from me, beside memories and some mobility; I missed both my sons’ graduations. I missed them receiving honor’s roll, partial scholarship and math awards. I was in surgery both days of their graduation. I vowed to never miss another milestone. Fight every day to keep pushing. I guess you can say it’s my will to live that has kept me moving forward.

TRHH: How important have your friends, family, and artists that participated in the album been to you throughout this time?

Steph Dash Nash: Highly important. I’ve never been one to ask for help and to go at something of this magnitude alone is not possible. Everyone has afforded me extra patience and understanding. It takes me longer to complete tasks and sometimes I forget things mid-sentence but everyone including the artists on this project continue to be very encouraging and supportive.

TRHH: Talk a little about your campaign with Sunnybrook Health Science Center.

Steph Dash Nash: Glioblastoma IV is one of the deadliest forms of Brain Cancer. There is no cure. The average life expectancy is 9-14 months. That’s unacceptable. Sunnybrook Health Science Center is the first to breach the blood-brain barrier to allow patients like myself to receive chemo. I made Glioblastoma shirts and with every purchase of a shirt you will receive a free download of the song “Strange Fruit” written and performed by O.C. and a percentage of the proceeds I will donate to the Sunnybrook Gord Downie Brain Cancer Fund. This song provided me with strength to fight every day.

TRHH: What do you hope to achieve with True Grit?

Steph Dash Nash: I’m a true, dedicated fan of lyricism. I believe this album showcases what real lyricism sounds like. On this album, I have some of my favorite artists that I grew up listening to. I want to prove that it is possible to make good music without sacrificing the fundamental elements of Hip-Hop.

Sherron Shabazz is a freelance writer with an intense passion for Hip-Hop culture. Sherron is your quintessential Hip-Hop snob, seeking to advance the future of the culture while fondly remembering its past.
View all posts by Sherron Shabazz →
This entry was posted in interview and tagged Big Sproxx, Canada, interview, Ontario, Steph Dash Nash, Stitch N Rhyme, Supreme Ultra Radio, Toronto, True Grit, Underground Express. Bookmark the permalink.