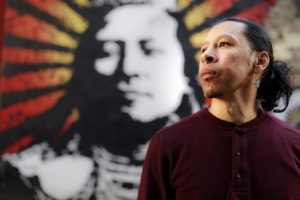 Artson spoke to The Real Hip-Hop about his new album, Brave Star, why he featured other Native American artists on the project, and about our light within that’s destined to shine.

Artson: I came up with the concept a few years before I put this project together. But really it’s just about me being brave enough to accept my life and being willing to shine that. Our people believe that we come from the stars, so the star people and just being accepting of being a star being and being here to shine light on the people. Being brave enough takes responsibility and you have to be a strong individual to do that. Originally the concept was to do a compilation with different indigenous artists. I was working on this solo project and decided to name my album “Brave Star” and just run with it like that.

TRHH: The cover is a takeoff of Mos Def and Talib Kweli’s Black Star. What impact did Black Star have on you musically?

Artson: Mos is definitely one of my favorite emcees. What they did consciously for the people that’s where I’ve always been. Being a part of Hip-Hop I’ve always been on the conscious tip, uplifting the people, and doing stuff for the community. It definitely had a big impact on me what they did at that time and seeing what’s going on with my people at this time I feel like it’s the same type of situation where I’m trying to uplift my people, do those same types of things, and carry on that tradition of conscious Hip-Hop and having substance in what I’m doing.

TRHH: What made you write the song ‘The Drum’?

Artson: The drum is so important. It’s like everything. It’s the heartbeat, it’s our connection, it’s sound medicine. It’s always moved me to dance. In our music everything is driven by the drum. That’s what made me do it. It’s something I felt I had to get off my chest. It’s something I’m always talking about – us being connected to the drum and how universal it is for all people because that’s the first thing that we hear.

TRHH: On the song ‘We Gather’ you touch on the things that we suffer through being people of color in America. What would you say to those who say, “Stop complaining, you have it better now than you’ve ever had it.”?

Artson: Some people aren’t going to get it. We gotta express ourselves and those people that aren’t gonna get it it’s hard to change their minds to understand where we’re coming from. This is something that’s not just today what we’re talking about. This is something in our DNA. This is something that has been passed down from generation to generation and when we see it today it sparks that memory in us. It has a deep root that is not going to just go away because people think that times are changing when they’re really not. It’s just different right now but it’s something that’s going to be here. It’s not going to change overnight so the people that think we have to get over it, nah, it’s still going on. We’re still being suppressed and attacked as people of color. It’s not something we’re going to get over overnight. Even over decades it’s still going to be here when our grandchildren are here.

TRHH: With the current presidential administration and the surge in hate crimes I’m puzzled as to why people would even feel that way.

Artson: Yeah, it’s crazy. It’s a crazy time right now. We’re able to be reached by the masses at a rapid pace, because of social media it’s just instant. I think our people are feeling good and there is more love in this world than hate. But there is spiritual energy that doesn’t want our people to rise. They know we’re coming together, this is our time, and we’re feeling powerful so they’re feeding us all this negativity in order to try to change our vibration and our frequency. It’s crazy how we’re all so tapped into social media, we’re all on our phones, and we’re seeing all these things and algorithms are controlling what we’re seeing. It’s just in your face all the time, but I believe it’s because we have a strong power that’s within us that’s trying to shine. It’s kind of like that Brave Star moment where people are feeling their light come upon but now we’re being fed all this negative energy to kind of dim that light that we have.

Artson: It was a few things. Some of it was dealing with what’s going on now with the election, what’s going on with social media, and some of it was some of those things that are changing us. Also too, some of it was me being on this road that I’ve been on for a long time, expressing myself through Hip-Hop, being a part of the culture, and how being on this road helped me find myself and understand where I’m coming from and the things I’m here to do, what I’m trying to leave behind, and help me understand where my ancestors come from. It’s always been a personal thing for myself. Everyone has to go through that road of being on your own to discover who you are. That’s kind of where the concept of ‘Lonely Road’ came from. Being on this journey, we’re here in this lifetime now but when it comes down to it you gotta pick yourself up, you gotta do your own thing. There’s gonna be people that are going to come in and out of your life but it’s up to you to walk your path strong.

TRHH: The album features other Native American artists. Tells us about some of the people featured on Brave Star.

Artson: I have my brother Quece IMC. Me and him have been doing some tours together over the last five years. Him and his family have been involved in the Hip-Hop scene for a long time. They threw one of the first all-native Hip-Hop events called “Culture Shock” in ’97. Redcloud is a brother from Hawthorne out here in L.A. County. He’s a beast on the mic. He’s really, really fresh on the freestyle tip. He’s been doing his thing for a long time, also. Then you got Wake Self and Def-I. They’re out of Albuquerque, New Mexico. These are younger brothers that are coming up and really making a lot of noise right now. Wake Self did a couple of tours with Masta Ace. Def-I has done some things on the Wake Up Show and got a lot of shine out there. These guys have been doing this thing for a minute and they’re really fresh. There’s a few different females on the album. They’re really powerful women that are making noise and it was really good to have them. Brittany has a real beautiful voice and she blessed some tracks. Sariyah really came through on “Reachin’ Seekin’ and Dreamin.’”

TRHH: Who is the Brave Star album made for?

Sherron Shabazz is a freelance writer with an intense passion for Hip-Hop culture. Sherron is your quintessential Hip-Hop snob, seeking to advance the future of the culture while fondly remembering its past.
View all posts by Sherron Shabazz →
This entry was posted in interview and tagged Artson, Brave Star, California, El Paso, interview, Lonely Road, Los Angeles, Texas, The Drum, We Gather. Bookmark the permalink.