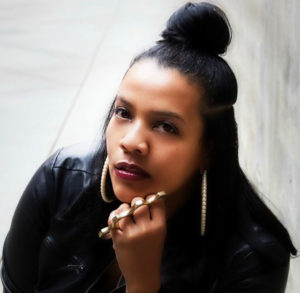 Lena Jackson is an emcee from Raleigh, North Carolina with her origins in poetry. Her debut EP “Darkness Brim” combines the raw vulnerability of poetry with Hip-Hop’s aggressiveness. The release finds Jackson tackling subjects that are rarely touched upon in Hip-Hop but are relatable to many.

Lena Jackson spoke to The Real Hip-Hop about her transition from poetry to rap, how she coped with the loss of her father, and her debut EP, Darkness Brim.

Lena Jackson: The title “Darkness Brim” is actually the title of a poem I wrote a very long time ago. I stumbled on the poem while I was cleaning up. I keep all of my poems, even back from my teenage years. The poem itself wasn’t all that great to me. It could have used work, but the overall theme of that poem was just talking about how life seems on the surface. How the world is trying to be perfect on the surface but there’s always these darker things going on in life that we don’t want to talk about. The Darkness Brim title is just a title that I came up with a long time ago to represent some of those darker things that everyone is always trying to hide or keep secret so we feel like we have ourselves together.

TRHH: What made you want to become an emcee coming from a poetry background?

Lena Jackson: The spark for me was when I became a teenager and started seeing my peers, most of them being male because I was a tomboy, rapping in cypher’s and stuff like that. I always like Hip-Hop and listened to rap music, but when I saw them outside or in the cafeteria doing it, it just lit the fire under me. I got so excited and I wanted to be a part of that and I also wanted to beat them [laughs]. I would tell myself, “I can do better than that.” It was a slight bit of competitiveness there, but it was motivation for me. I really started modifying my poetry and making it bar-like. I’d bring it into those rap circles and they would be really impressed by it because it had a different kind of sound to it. It was clearly a lot more poetic. I would just kind of build from there and it became my main thing. Poetry is my first love, but being an emcee is my main thing now.

TRHH: Was it difficult for you to transition from writing poems to writing raps?

Lena Jackson: No. It really wasn’t because the subject matter didn’t alter all that much, it was more so the technique between how you’re writing and reciting a poem as opposed to writing a lyric or spitting a bar a certain way. I did learn more about rhythm and cadence and stuff like that when rapping over a beat. That took some practice, but to me I loved it. I love learning how to do things differently and doing things better. It was a challenge that I was always up for. To me it didn’t feel hard. I felt like it was natural and where I should have always been, to be honest.

TRHH: How’d you link up with Precyce Politix for ‘Siberia’?

Lena Jackson: Well, Precyce and I have actually been dating for three years [laughs].

Lena Jackson: Yeah [laughs]. We met in 2015 at a music event. As a matter of fact it was an album release for K-Hill’s project “Truck Jewels & Filters.” We were just cordial and went about our evening. I didn’t expect to have any other contact with him again, and then we just kind of came back around, we became cool, then we dated, and now we have a son [laughs]. We’ve always kind of been each other’s partner in crime as far as making sure we support each other musically and are kind of on top of our game. He’ll be like, “Listen to this,” and I’ll be like, “Listen to this” and that’s just how we’ve done things. We’ve done a couple of songs before already, but I feel like we were kind of feeling out what we wanted to do collaboration wise. So, when we finally did “Siberia” it felt right. It felt like it was the collaboration that we always wanted to make in the first place. Yes, we were dating but I couldn’t have picked a better person to be on that song.

TRHH: Is there a competitiveness between you two?

Lena Jackson: No, I wouldn’t say that there is a competitiveness. I would say that there are challenges sometimes when you are both artists, especially in the business. Creatively there is no real tension. We share so many common passions, dreams, and goals so all of that really clicks. But when it comes to the business and the politics of trying to make it in the industry and stuff like that, you have so many people who may want to use you and discard him or use him and discard you. There are people that have ulterior motives and it winds up becoming a challenge because you have to weed out all of the drama and the BS that the music business brings just to maintain your partnership and also maintain that healthy balance where you’re encouraging each other just as artists in general. We definitely have some challenges here and there, but we pull through.

TRHH: On “Therapy Couch” you said, “My dad made it seem like life was simplistic, but with his transition/I never seen so many clouds up in my vision.” As someone who has also lost their father and has struggled to pick up the pieces afterwards, how have you been able to cope after losing your dad?

Lena Jackson: I cope primarily by staying connected to my family. I’ve always been family oriented and it’s something that my father was very passionate about. He found wealth in family. He accomplished that goal before he left this earth. It’s only right and it’s only natural that we stay strong and stay supporting each other as far as my mother and my siblings are concerned. And make sure that our next generation is just as strong as far as family ties go. Secondly, I stay focused on the music. It’s therapeutic, it’s cathartic, and it’s something that my father always wanted me to be successful in because he knew how much it meant to me. When he first passed I felt so hopeless that I kind of wanted to give up. Darkness Brim was only two songs short of being completed at that time and I was still ready to give up. It was about to not come out because I didn’t want to finish, but my father would have wanted me to. And he would have wanted me to put my all into it. I tell myself to honor him, so I had to make sure it was done. Whether anybody liked it or not me completing it felt like I did right by my father. That has helped a lot in this process of grieving.

TRHH: The Malcolm X quote on “Poor Kids” is one I’d never heard before and it was so on point. What speech is that from and how’d you find it?

Lena Jackson: This is something that I’ve told a few people – the first voice of authority that I ever remember hearing as a child was my father and then the second voice was Malcolm X [laughs]. My father was very intrigued by Malcolm X and has such respect for him that he would actually play speeches in the house. We’d be cleaning up or playing with toys and we’d hear Malcolm X speeches in the house. To be honest, I can’t remember the name of that particular speech off the top of my head. He was talking about poverty and it’s deep effect. It’s deeper than the typical things that people would say like we’re poor so we have to pick ourselves up, work hard and then we won’t be poor. He was explaining, “No, that’s not how poverty works. It works for some but that’s not really what it is. It’s so much deeper than that and it’s a system in place for it to happen.” He was emphasizing that need for people to have freedom mentally, spiritually, and financially as well. Just recalling that speech I didn’t want to hit anybody over the head with it and have too much of it in there. I definitely wanted them to have enough to emphasize what I was talking about and what I’ve been through coming from somebody who has dealt with poverty and homelessness as a child.

TRHH: Earlier you mentioned the hidden darkness and the things that we don’t show. Do you think that’s changing in our society?

Lena Jackson: Yes and no. Yes because there are things that we are more open about or more blatant and bold about, but I don’t know if we’re being vulnerable about them. For example, back in the day when there was the crack era people would talk about it almost from the outside looking in perspective. They would see somebody who is dealing with it, but a lot of people wouldn’t want to admit that some of those people were their own family members. It may have been their mom or it may have been them. You fast forward to now and you have people who are addicted to pain killers and addicted to cough syrup. There is an addiction that’s going on all over the country now and people are talking about it all day, every day!

It’s a very common thing. People are rapping about drinking lean in their songs. That’s not a knock to them. I’m just saying that nobody is really hiding what’s been done, but nobody is talking about the effects of it either. That’s more so my point. My point is people are talking about the behavior but they aren’t going deeper into the effects of the behavior and how it affects them. So, when I talk about depression, or domestic violence, and I talk about mental health, feeling crazy, or getting played by somebody that I’m interested in, I’m talking about these things and it’s nothing new under the sun. It’s been talked about before, but I feel like I need you to know that I dealt with it. Even when I knew it was wrong I still did this and I still did that. To me it was like a deeper chapter of being vulnerable.

TRHH: What do you hope to achieve with Darkness Brim?

Lena Jackson: What I hope to do is to connect with people who feel like the project resonates with them on a personal level. I do want it to resonate with people. I personally don’t feel that we have to always keep our composure if we’re not okay. It’s kind of my way of telling other people that if something is wrong, something is serious, or if something means something to you, you don’t always have to be that perfect package on the outside. It’s okay to be a mess sometimes. Especially if you have every intent on fixing that mess and being better than you are, but in the meantime, it’s okay to fess up and be imperfect and be vulnerable and be dark. The light is going to come again, but the darkness still has to be acknowledged.

Sherron Shabazz is a freelance writer with an intense passion for Hip-Hop culture. Sherron is your quintessential Hip-Hop snob, seeking to advance the future of the culture while fondly remembering its past.
View all posts by Sherron Shabazz →
This entry was posted in interview and tagged Darkness Brim, EP, interview, Lena Jackson, North Carolina, Poor Kids, Precyce Politix, Raleigh, Siberia, Therapy Couch. Bookmark the permalink.