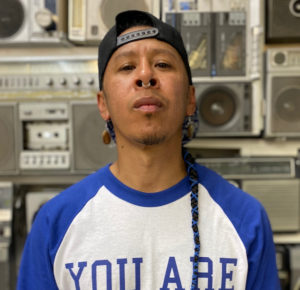 Indigenous emcee Artson recruited other Native American artists to assist him on a new album called “Brown Fist Emoji.” MC Redcloud, PJ Vegas, and Crystle Lightning join Artson on an up-tempo album that hearkens back to Hip-Hop’s infancy when its credo was peace, love, unity, and having fun.

Artson spoke to The Real Hip-Hop about Brown Fist Emoji, recruiting fellow Native American rappers for the project, and why he’s releasing 52 songs in 52 weeks.

TRHH: The vibe of Brown Fist Emoji is really upbeat and west coast. I feel like this kind of album is needed right now. Did you go into this album purposely trying to make an up-tempo, feel-good record?

TRHH: What was the process like recording the album with MC Redcloud, PJ Vegas, and Crystle Lightning?

Artson: When I started the project, I went and did all of my parts on my own. So, I kind of like presented everybody a project. I wrote all the hooks on the project and recorded all my parts. I was like, “Hey guys, this is the album and I would like y’all to get on.” That’s how it went down. They loved it and they all got busy. Once they all had their stuff, I booked the rest of the studio time, we all went in together, and they knocked their parts out.

TRHH: You said you wrote all the hooks?

Artson: Yeah, I wrote all the hooks on the album.

TRHH: The hook to “It’s Like That” is crazy. The melody just feels so good. Tell me about writing that one.

Artson: Word. Oh man, it’s crazy. Sometimes when I’m writing singing hooks, because I’m not necessarily a singer, I get in this space where I try to let go of pretty much everything, clear my mind, let the music guide me, and just tell me what I’m supposed to be writing and it kind of just comes out. Usually I’ll wrote three or four hooks for a song and I’ll go to my wife or a couple of people and be like, “Which hook do you like?” With “It’s Like That” that was the hook. It just came together. That song just kind of wrote itself.

TRHH: The song “Rise Up” features Ras Kass, how did that collab come about?

Artson: That happened through Redcloud. After we wrote the song we definitely wanted some west coast representation on the album that paved the way for us to be doing our thing. Cloud had a relationship with him and was like, “I’ll reach out to Ras Kass.” He reached out to him, sent him the track, and Ras was like, “I’m with it.” He jumped on board and it just happened. It’s crazy because Ras Kass is someone I looked up to for a long time. He influenced me a lot with the way I write and the way I think, so it’s such a blessing to have him be on board.

TRHH: You have another great appearance from Chino XL on the title track. How did that come about?

Artson: It happened exactly the same way – through Redcloud. They actually both agreed within days of each other. Once we finished our parts on the two songs we thought of a few people that we were going to reach out to, but they were down. It was crazy. In a few days these guys were ‘bout it. So, it just happened and they both really came with it. It was crazy to hear their verses. They didn’t just give us any verse. They put everything into it. I was like, “These guys went off on these tracks! I was super grateful. They blessed these songs up!

TRHH: Do you have a favorite song on Brown Fist Emoji?

Artson: I would probably say “It’s Like That.” For me, almost everybody that heard the album really love “It’s Like That.” They like the first song, “Rise Up,” and they like “It’s Like That.” I think people like “Rise Up” because it’s similar to my last project, so they kind of get the vibe of where I was on Brave Star. We’re talking about bringing the people together and rising up. I purposely put that song at the beginning of the album because I wanted that feel and I wanted people to be hype on that. But once they get to “It’s Like That” they’re like, “You guys are really trying to have fun and create a vibe, bring us to a party, make us move, and really get us into that west coast party vibe.” Everybody likes that song, so I have to say that’s my favorite song on the album.

TRHH: What inspired your 52 songs in 52 weeks campaign?

Artson: There’s a few things that happened. I initially wanted to do a Brave Star 2 album. I wrote a few songs and these songs from Brown Fist Emoji came in. At first, I wanted to do an east coast/west coast double album, but it just didn’t feel right to me. It just wasn’t coming off. It didn’t feel like where I was at mentally. I didn’t feel like I wanted to be where I was when I was doing Brave Star — trying to do a conscious album. So, I split the projects up and we knocked out Brown Fist so fast. I started recording a whole other album and then I ended up doing a whole ‘nother album! I was like, “Man, I’m sitting on three projects right now and I’m recording even more songs.” Brown Fist was supposed to come out last year and a bunch of things happened that pushed the project back. I ended up sitting on a bunch of music and I said, “Man, what am I going to do?”

I wasn’t even thinking about how much music I have, but when I started thinking about putting one out I was thinking, “How am I going to market all this music financially?” I came up with an idea of trying to put a song out every week. As soon as that happened, I was watching a bunch of interviews around this time and I saw an interview with Russ. He did something like that where he put out a song a week and it really inspired me. I was like, “Man, I’m sitting how this guy was sitting with a bunch of music. Maybe I should really think about doing this?” I was so inspired that I was like, “I can do this. I’m just going to go ahead and put it out and see what the people think, see how it goes, and see where I’m at next year.”

TRHH: So what kind of sounds do fans have to look forward to over the next year?

Artson: I’m definitely bringing different sounds each project. We have this west coast sound on Brown Fist Emoji. The next project will be a more chill vibe. A little R&B beats kind of, singing a lot, but we’re still emceeing. I did a whole trap album, and I did another boom bap album. All of these different styles just came out of me just out of me being an artist, allowing myself to be free, and not putting myself in a box. I’m not worried about what the people are going to think, I’m just letting myself be creative. So, I’m just hitting them with all of these flavors and styles. People are going to be taken on this journey with me, whoever rides with me for the whole year, because once they’re done with one style it’s going to go into a whole ‘nother style. It’s not going to keep me in one box, it’s just going to go all over the place.

Sherron Shabazz is a freelance writer with an intense passion for Hip-Hop culture. Sherron is your quintessential Hip-Hop snob, seeking to advance the future of the culture while fondly remembering its past.
View all posts by Sherron Shabazz →
This entry was posted in interview and tagged Artson, Brown Fist Emoji, Crystle Lightning, interview, It’s Like That, MC Redcloud, PJ Vegas, Rise Up. Bookmark the permalink.