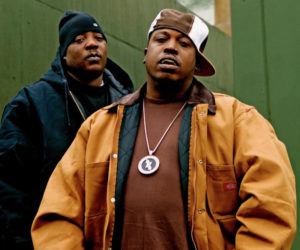 In late 2011 I had the pleasure of interviewing one of the best duos in rap history, Lil’ Fame and Billy Danze, M.O.P. Their ultra-energetic, hardcore style is unlike anything we’ve ever heard in Hip-Hop. From 1993 to now M.O.P. has consistently churned out dope music as a group, as solo artists, and Fame as a producer for others.

M.O.P.’s first single, “How About Some Hardcore” was the perfect introduction to fans of the groups rugged style. Their 2000 hit “Ante Up” from the critically acclaimed album Warriorz is hands down one of the greatest songs in the history of Hip-Hop.

I was beyond excited to interview M.O.P. – I’m a fan. Due to a scheduling mix-up, my time was cut short with the Mash Out Posse, but the guys gave me all that they had in a limited amount of time. Please enjoy my conversation with the legendary M.O.P.

TRHH: How’d you hook up with the Snowgoons for Sparta?

Billy Danze: It was through the label. We heard of them and knew they had some fire so we just made it happen.

Lil’ Fame: ‘Cause we’ll fuck somebody up [laughs].

Billy Danze: Just as young kids in the street we been fighting. It always seems like somebody was against us so we had to actually fight hard. We’re still doing it today, so why wouldn’t we name it Sparta?

TRHH: Tell me about the single Get Yours.

TRHH: Fame, was it difficult for you to take a step back and not contribute to the beat making process this time around?

Lil’ Fame: Yeah, it’s natural man. I love music whether you do it or I do it. If it’s a hot beat I just wanna be on it. I just wanna rap on it. I don’t mind getting work from other producers, I’m cool with that.

TRHH: I saw you guys perform at Rock the Bells a few years ago and it was insane. I went to a show recently with a lot of up and coming young cats and it was wack, but Method Man came on last tore the place down. It seems like the guys from your era can do that for the most part. What’s the recipe for putting on a great show and do you think it’s a foreign concept to the new generation of emcees?

Lil’ Fame: Meth really gives a good show. I think they’re missing that ingredient. Some people just come pick up their bag of money and they boogie. They get on stage and act a fool for whatever their time of the show is then they break out. They don’t realize that you gotta give the people what they want. The people come to see a show and nigga you telling me to do all this shit, I wanna see you! You asking for crowd participation. You gotta get the people excited. You gotta switch a record here and there, you gotta keep shocking them. That’s what we try to do. Hip-Hop nowadays they don’t even make that kind of music no more that’s exciting and up-tempo. Everybody’s just dancing. Everybody wants to dance and do that kind of shit. Nobody wanna put their back into it no more.

Billy Danze: Do you know how much a pair of Gucci sneakers cost? The average kid can’t afford the shit that they be talking about.

Lil’ Fame: The fans don’t get what they want. They come to see ‘em and expect a good show and when they see ‘em they’re just walking across the stage and shit like that. They not putting nothing into the shit so they go home unsatisfied.

Billy Danze: They don’t even come with a change of clothes because they don’t even sweat the clothes on that they have. They’re like, “Fuck it, we’re just gonna go up there and walk across the stage and not break a sweat.” Their energy level is way down, brother.

TRHH: How would you compare Sparta to other M.O.P. albums?

Billy Danze: Wow, how do you compare? In my opinion the comparison is its M.O.P. right now. That’s the only thing I can say because the quality of music is still the same. We make sure we give you good quality music all the time. We make sure we give incredible hooks and dope rhymes that are extra aggressive. I want you to feel the same way I felt when I was excited about writing this rhyme in the studio. Sparta is an incredible album. Do you like the album?

Billy Danze: Right. Again, we Spartans. We want people to understand that we don’t mind being in the fight and fighting the fight. Some dudes are just in the fight hanging around. We’re on the front lines with it and we don’t mind showcasing that to people. Like Fame said, we wanna give people a show. We wanna give people good music. We want our music to last. M.O.P. will never have a record that you can put out and it will just die, with people still trying to sweep it underneath the table.

TRHH: It seems like you guys got stuck for a while in situations with Roc-A-Fella and G-Unit. What did you learn from those situations and is it better for M.O.P. to be independent at this point in your careers?

Billy Danze: It’s definitely better for us to be independent. We built our own fan base. Today’s CEO don’t understand our kind of music. A lot of them don’t understand the people that we make music for. They don’t understand that we represent that part of society that people try to forget about. We’re always gonna go hard…

Lil’ Fame: And we’re gonna be us. It don’t matter. That’s what the people love to see. “I met them niggas and them niggas is cool as shit.” We can’t put on an image and try to be these new somebody’s that motherfuckers don’t know. We human, man and we’re always going to have creative control. We need creative control, that’s the reason why make the music that we make nowadays.

Billy Danze: Big shout out to the dudes at Roc-A-Fella and over at G-Unit. We still have good relationships with them and we appreciate them for giving us the opportunity to further our careers.

TRHH: I always wanted to ask y’all this. Many years ago, XXL asked a lot of emcees who their top 5 rappers were and Rakim said Melle Mel, Kool Moe Dee, Sadat X, Raekwon, and M.O.P. I wondered did y’all see that and what are your thoughts on it?

Billy Danze: I didn’t see it but every time I think about it, it’s gonna be like it was just said. You have no idea. Fame will tell you how I feel about Rakim. There will never ever, ever be another rapper on this planet as dope or 75% as dope as Rakim. Can’t nobody do nothing with that dude.

Lil’ Fame: Ra’s a fuckin’ beast, man. Ra’s a fuckin’ beast! Goddamn, man. The shit that he said in ’86-’87 niggas ain’t saying today. Shit that he said I’m just now catching on like, “Goddamn!” You need to rewind the shit he say. That’s what music is missing, man. We’re missing that fuckin’ fun. You got a song and it’s like a brand-new game and you keep learning more shit and more shit. It ain’t just simple where you hear it one time and know the whole fuckin’ song.

TRHH: When arguably the greatest of all-time says you’re in his top 5, that’s huge!

TRHH: I believe he really felt that way. When I asked Sadat X about it he had actually heard it. What we talked about was everybody that he named has their own unique style and flow, which Rakim had. I think he just appreciates people being different and everybody right now kind of sounds the same. Who sounds like M.O.P.?

Billy Danze: I wanna have a rap battle. I want one of you little bastards to get on the microphone and start talking a little greasy. We 100% street dudes but this is about rap. We never wanna put a bad name on Hip-Hop. I’m talking about just a rap battle. Fire some shots at us, please! Be like a big named dude, too. One of the hot ones so we can destroy your ass!

TRHH: Are you still planning on doing the BrownsVillainz album?

Lil’ Fame: I think my boy Laze leaked that out. Before doing the Snowgoons album we was in the studio working. We started recording songs and that was some of the ideas that we were playing around with.

TRHH: So, it’s not official?

Lil’ Fame: Nah, but we’re definitely going to do an album

Billy Danze: We’re going to start the next album in like 2-3 weeks.

TRHH: My pops passed away two years ago and when I got the call that he was gone Warriorz was playing in my car. In some odd way that song became like my theme song around that time and it helped me get through the worst time of my life. I just wanted to let you guy know that and say thanks.

Lil’ Fame: I lost a lot of people too, man. Scarface got me through a lot of shit, man. I understand what you’re saying.

TRHH: Scarface the emcee or the movie?

Lil’ Fame: [Laughs] The emcee, man. The Untouchable album got me through a lot of shit.

TRHH: I just wanted to say thank you because that album really got me through that time.

TRHH: Why should fans go out and cop that Sparta album on November 22nd?

Billy Danze: We need to get out of this good music recession. Me and Fizzy Wo has went into the studio and made sure we put together a stimulus package for you motherfuckers. Make sure you go out there and get that Sparta record so you can get that good old fashion head nod in your ass, you understand?

Sherron Shabazz is a freelance writer with an intense passion for Hip-Hop culture. Sherron is your quintessential Hip-Hop snob, seeking to advance the future of the culture while fondly remembering its past.
View all posts by Sherron Shabazz →
This entry was posted in From the Vault, interview. Bookmark the permalink.