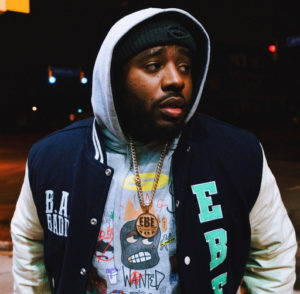 Syracuse emcee B.A Badd ended the last decade with a 10-track release called “Everybody Eats (1st Plate).” The first installment of the Everybody Eats series is a grimy look into the life of B.A Badd over cinematic soundscapes and grimy break beats.

B.A Badd spoke to The Real Hip-Hop about the rise of Hip-Hop from upstate New York, the pro wrestling references in his music, and his new album, Everybody Eats.

TRHH: Why’d you call the new album Everybody Eats?

B.A Badd: It’s just a motto that me and my guys live by. We created a company after the motto, which is E.B.E Lifestyle. E.B.E stands for “everybody eats” so by branding ourselves and pushing the movement that much further, I might as well name the project after that. At the same time my first project didn’t have no features on it. People think that I don’t like to reach out and collab with people, so I said I was going to collab with people on this project. What better name to use than Everybody Eats?

TRHH: One of the collabs is the title track with Conway the Machine; what was it like working with him?

B.A Badd: It was dope. I reached out to Conway years ago before anybody outside of Buffalo really knew who he was. I was familiar with Conway and his work just being in Buffalo and being a part of the local Hip-Hop scene you’re kind of familiar with everybody. I reached out to him and he came through and was actually in one of my videos. When I first came home from jail in 2014 he was in one of my videos. It’s funny ‘cause nobody knew who he was. I couldn’t even toll nobody “Yo, I got Conway in my video” because they would be like “Who is that?” I knew he was a dope artist and I just like to be around dope people. When this time came about I just reached out to him and he was like “Let’s make it happen.”

TRHH: You also worked with Rome Streetz on the song Codes; how did that collab come about?

B.A Badd: I came across Rome Streetz on Soundcloud through the algorithms. You know when you listen, sometimes they may play artists that you make like. I was like “Yo, this dude nice!” I looked him up on Instagram and started following him. I shared one of his songs I liked on my Insta story and tagged him in there. He seen it and it probably made him go back and check me out. We had a mutual respect for over a year on some fellow emcee type of thing. When it came down to it and I was putting this project together I was thinking of some people that sounded good on certain production and who I could go back and forth with, and he was one of the dudes. I had to get Rome on there. I was a fan of his music, so I wanted to tap in with him.

TRHH: You rhymed over a few classic break-beats on the project. Was that done on purpose or were those the tracks you just happened to choose?

B.A Badd: Honestly, they were just tracks that I happened to choose. Working with Graphwize, Reallyhiim, Chup, and Vinyl Villain, I was just going through some of the production that I already had and picking out the joints I felt fit the mood of the project. This project I really just wanted to rhyme on it. I wasn’t thinking of song structure or getting deep or anything like that. I just wanted to rhyme. My first project A.R.T. Work was putting songs together and things like that. I was getting introspective with everything, but this one I just wanted to be on the surface with it, so these these beats spoke to me. I liked the energy. I felt it had great energy and I just went with that mood and it carried through the whole project.

B.A Badd: It’s hard to pinpoint one person. The first rap CD I had was Mase – Harlem World and I was probably in third grade. I can say this, what made me want to do this was I remember Biggie, I believe it was the Soul Train Awards, and he was like “Where Brooklyn at? Yo Brooklyn we did it!” I remember that being a little boy and I don’t know why I felt excited with him like I was from Brooklyn, ‘cause I wasn’t from Brooklyn. I was thinking in my head that everybody in Brooklyn must be excited, but what about Syracuse? I ain’t never heard of no rappers from Syracuse so that’s what I’m going to do. What Biggie was for Brooklyn I want to be that for Syracuse. Over time I came across other emcees, but at the time that’s what sparked me to do this.

TRHH: You have a Ric Flair clip on “Syracuse Badd” and there’s a Ted Dibiase reference on the project as well. Are you a big wrestling fan?

B.A Badd: Yeah, I am. I’ve been a wrestling fan my whole life. The thing about it was, I kind of didn’t want to use the clip because it was wrestling and Westside is heavy with the wrestling thing. I’m big on not biting and having your own style, but I came across that clip on Instagram probably a year ago. I felt like I was Ric Flair when he was saying “I’ve been stabbed, I’ve been hit with chairs, I’ve been beat up, but I keep going.” I went through all of that. That’s my thing. Anybody that knows me, if you ask them what they could say about B.A they would say I’m resilient and I don’t stop. I felt like that’s what he embodied in that interview, so I used it in one of my intros. My man was like “You can’t use that because of West” and I was like “Yo, this shit feels so organic to me that I gotta use it. I don’t care what nobody says.”

TRHH: Also, Westside is not the only one to reference Ric Flair. You have the Migos, Killer Mike, and Pusha T.

B.A Badd: Facts, facts. A lot of people, Smoke DZA too. A lot of people do, he’s just the most prominent guy at this moment. It’s kind of like when DMX first came out with the dogs and I do a song talking about I love my dogs. X is the hottest thing now and you’re talking about dogs? That was the kind of energy that was given. Everybody that knows me know that I’ve always been a wrestling head. Even to this day I flip through it here and there and check out things.

TRHH: Do you have a favorite wrestler?

B.A Badd: I would have to say one of my favorite wrestlers is the Undertaker. His presence is just crazy. Even after all these years he would come out and I’d get goose bumps. The Rock was official, Stone Cold was dope, and Ric Flair was dope. All of them were great, but from my childhood Undertaker was part of my childhood growing up. Everybody wanted to choke slam somebody in school. He just embodied the 90s all the way up.

TRHH: Are you surprised at the acceptance that emcees from upstate New York have received in recent years from all over the world?

B.A Badd: Yeah and no. I seen this coming. I knew it was a matter of time for it to happen. At the same time, it’s like, man, it took a long time for us to break through. It’s got a lot to do with the internet and it being no more gatekeepers. At one time you had to go through people and they were going to put on their people from where they came from. Being from where we’re from, a big city like New York looked down on us for years. They never really gave us our respect. Or if they did, they would snatch one of us and use our talent and one of your songs becomes one of their songs. Then it’s like, who can you tell that they stole this person’s song? For it to happen it’s about time, but it’s also like, wow. Seeing Griselda drop their major release was like, yo, this is really happening. It’s really dope.

TRHH: Do you have a favorite joint on Everybody Eats?

B.A Badd: I would have to say Round Table Convo.

B.A Badd: Because out of all the songs on the project, I got the most introspective on that record. On this project I didn’t get too deep and I didn’t really talk about nothing. I kept it on the surface. On that record I just let my pen go and however it made me feel that’s what I put down. I like those zone out records. That one meant more. I talked about the passing of my friend Kahari, aka, F1. I talk about my mom and her going through her sickness. I just touched on little things. Me coming home from jail and trying to be resilient and make it and not letting myself fall back, but still doing what I had to do to survive and at the same time staying focused. Round Table Convo is definitely my favorite song on the joint. I play that joint back every time I hear it.

TRHH: When will we get the second plate?

B.A Badd: The thing about this Everybody Eats joint is its hard working with multiple artists. You’ve got to wait on their verses. This was supposed to drop last August. I had a little rollout planned out, but I just didn’t get my verses in time. Everybody Eats is going to be a little more sporadic. I’m always going to work on different joints collabing with people, but I can’t put a pinpoint on when the next one is coming out. It should be one coming out later in 2020. I have a lot of projects scheduled to drop in 2020, whether it’s Everybody Eats or Lost A.R.T. I got a project called “Trump Era.” I got a joint with me and my man Maf produced by Graphwize called “Dirty Revolver.” I got a lot of stuff that’s 85% done or 100% done that we’re lining up to make sure we drop this thing strategically and do it the right way.

Sherron Shabazz is a freelance writer with an intense passion for Hip-Hop culture. Sherron is your quintessential Hip-Hop snob, seeking to advance the future of the culture while fondly remembering its past.
View all posts by Sherron Shabazz →
This entry was posted in interview and tagged B.A Badd, Codes, E.B.E Lifestyle, Everybody Eats, Everybody Eats 1st plate, interview, New York, Round Table Convo, Syracuse, Syracuse Badd. Bookmark the permalink.