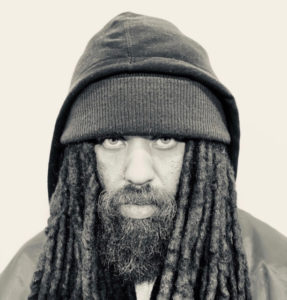 To celebrate the 10-year anniversary of his 2009 EP, “Shroom Crumbs” Bru Lei released the projects sequel, “Crumbs.” Crumbs is a throwback to a time when lyrics and having fun were on equal footing in Hip-Hop. The producer of Crumbs, DJ PRZM, passed away in 2007 while awaiting a heart transplant. The music from Crumbs was archived by fellow Spitball crew member, DJ Pos 2.

Crumbs comes to us courtesy of Public School Records and features appearances by Metro, Eclypse Da Predanatural, Illy, and Jakki the Motamouth. The 8-track release is produced entirely by the late DJ PRZM.

The Real Hip-Hop spoke to Bru Lei about what it was like working with DJ PRZM,            his Secret Recipe podcast, and his new EP, Crumbs.

TRHH: Crumbs is one of my favorite releases of 2019. It sounds classic, but new, if that makes sense. Are all of the vocals on Crumbs old or were some recorded recently?

TRHH: How did DJ Pos 2 unearth these songs?

Bru Lei: Man, he’s just a collector. There was a documentary called Rhyme & Reason, or The Show, one of those. It had Biggie on it, Wu-Tang, Warren G, and Biz Markie. Biz Markie had all the old flyers and it put something in our head that we had to capture these times. I started collecting news clippings and flyers for old shows pre-internet. I think he archived a lot of the records, CD’s and cassettes. Pretty much anyone’s music from that timeframe and period, he has that archived – stacks and stacks of people’s music.

Bru Lei: Man, DJ PRZM, rest in peace. He is the best producer that I’ve ever come in contact with. That’s saying a lot. RZA is my favorite, I’ve met Premier, I’ve met all of the big time, famous producers. There’s something about PRZM, maybe it’s me being biased from having firsthand contact because we lived together in multiple places. He would get people that were enemies on songs together and it would be a dope song.  At the end of the day, no matter what your beef was, he was about the music. He was just trying to make dope Hip-Hop. He also had a sense of humor. Whatever the situation was, he would make some type of fun out of it. He would make it entertaining, to say the least. We had a song together called “Captain Minute Man” and it was just about being not that great in the sack. I don’t even know where that came from, but he had these ideas of certain topics that no one else was doing. He would be real creative with that. When “MILF” first became a term, he was like “Oh, we’re the MILF hunters!” It’s just funny stuff to me. A lot of people were on some let’s wear Timberland’s, camo, talk about guns, drugs, and shooting people. He would make fun of that. He’d say “Okay you’re wearing a bulletproof vest, but I’m aiming at your head.” He wasn’t shooting nobody. He used a lot of TV samples. He would watch Golden Girls.

He was just a good all-around guy. He would put on a beat and it would be the most banging beat, but he would only play it for 30 seconds and he would switch it to another banging beat, more banging than the first one and he would only play it for ten seconds. You can’t write to it. You had to have something already written. He conditioned people to come over with verses to his home. He had a set-up in the living room. It would be a couch full of people – Copywrite, Illogic. The competitive nature that he set was high. He raised the bar high. It took me a month or two before I first started recording with him because I came from another scene and background. I wasn’t adapted to the competitive nature. It was a lot of battling nature, too. I love Wu-Tang and all of that stuff, but the level that they were at was just way higher and it pushed me to get to that level. He was an entertainer.

With the live shows it would be more directed upon the performance, not just getting up there and saying your rhymes and standing still. He was like “This is how we come in! We have to come in one by one. If you’ve got a song with this guy, then these two people come in and you fall back.”  He would play the theme song to Three’s Company and be like “Someone’s at the door? Who is it?” And it would be whoever. He was a DJ, producer and rapper.  In our crew he actually added two DJs. He would come from behind the tables and we would have backup DJs. One was actually a DMC champ, DJ Bombay. The other was DJ Pos 2. When we traveled and did shows Pos 2 was our DJ. Every Sunday on Ohio State’s campus, which is no longer even there, it’s a Target now, he would bring people down from New York, Chicago, and the Columbus cats. He would host shows, open mics, and battles. It was a spot for b-boys, b-girls, graffiti artists, rappers and alcoholics. It was a punk rock bar too, so it had all kinds of people. We had that edginess to our music because of the punk rock scene. We couldn’t be all watered-down and do bubblegum rap, because no one was really on that.

Working with him was dope because he would just give his ideas on how to record. He would wake me up in the middle of the night or early in the morning and say “You’ve got to record with that voice.” A lot of people are real cautious of the voice that they had. He would love if I was sick. He would say “You’ve got to have that cigarette voice.” He would try to catch me when my voice was really raspy. He’d want to record it, EQ it, mix it, and master it. He did a lot of mixing and mastering of our music. He did all the DJ cuts. He was a multi-talented guy. He was a dope artist. He could draw real well. He was super-duper talented and super-duper chill. I miss that dude. He was like a magician. He would always videotape stuff and film stuff, so a lot of those memories are archived. As far as, as a producer he would take a TV commercial and make it a banger. His beats were banging. DJ Rhettmatic from the Beat Junkies was quoted as saying that DJ PRZM was J Dilla on steroids. I felt like that’s the best compliment that you could receive as a producer.

TRHH: Do you have a favorite song on Crumbs?

Bru Lei: Aw man, I do not. I do not because it all means so much to me. I was asked to pick a single. I did the order of the songs and a lot of these songs I haven’t heard in 15 years. PRZM’s absence in the physical and knowing that he produced these songs makes them sentimental to me. The value is real high and priceless that they still exist. I like Crazy Summer. I can remember a lot of these days. If you chilled and came back the next day somebody else would be on that song. Even if you did record a song it didn’t mean that it would be the final song. The other thing I liked about PRZM is the competitive nature. Just because you were there and recorded a verse to it, does not mean that you were going to be on that song.

You might rap first and listen to the song and you’re rapping last or in the middle. He had total creative control to make it be the final product of what it was and it was dope. Back to Basics I like a lot because it was me, Metro, and Eclypse. He ended up going to Def Jux with S.A. Smash. Him and Camu Tao had formed a group. Eclypse was like Spitball. He’s one of the dopest rappers I’ve ever heard as far as consistency and stuff to this day. Me and PRZM kind of had the same drive. We were never going to stop rapping no matter what. It’s hard to say what my favorite song is. It’s a good problem to have but I can’t really say. Crazy Summer I like a lot.

Bru Lei:  Man, 2020, I’m just trying to carry the legacy as far as dope music. Regardless of the topic, subject, political correctness, or whatever it may be. I have many different avenues where I can take the music. What I’ve been doing in California is gathering people at my house every Thursday and we call it Rap Camp. It’s something similar to what PRZM did, but he did it on a day-to-day basis. He didn’t stop with the music. I invite everybody over on Thursday and in the course of months we’ve recorded hundreds and hundreds of songs. I just want to continue with the music. My Secret Recipe podcast is about sharing people’s stories on my platform. That’s been fun. I’ve been offered to go on some musical tours, but I feel like if I tour it would be to do podcasts and interviews. I like it a lot.

That’s kind of where I’m at. I have a Hip-Hop game that will hopefully come out by Christmas. I’m just continuing with the music and pushing the music. Every February I’m trying to drop an album because my name is in it, Bru. I did one this past February and this February I hope to drop one on Groundhog’s Day, which is February 2. I will call the album FeBRUary 2nd. It has a Groundhog’s Day theme, so Bill Murray is kind of the narrator of it. It’s based off the movie. J. Rawls’ birthday is in February so hopefully I can get a beat [laughs]. I’m trying to pitch that it’s all produced by J. Rawls. There’s some great people that were born in February – J Dilla, Erykah Badu, Common…

TRHH: Common was born in March.

Bru Lei: He was born in March?

Bru Lei: So, it’s an Aquarius, Pisces album. You should check the last one, for real. Shroom Crumbs was my favorite album that I did. It has sentimental value. Since then I’ve been trying to catch that same vibe or at least feel as good about a project. FeBRUary I feel like I did it because of the production. I recorded it by myself in my bedroom. I mixed it. Every element of it I did myself. Usually I have to depend on other people to do a lot of other things, and it doesn’t seem to be as great. They’re still good albums and good music. That led me to starting the Rap Camp and recording a bunch of youngsters. I have the ages 15 to about 22. That’s where I’m focused right now. I’m trying to guide them and extended my blessings to them so that they can win. They have a lot of melodies, and styles that I feel like are special and dope for Hip-Hop. The Secret Recipe podcast, the album FeBRUary 2nd and one of the groups from Rap Camp is called Uieris – those are the things to look out for.

Sherron Shabazz is a freelance writer with an intense passion for Hip-Hop culture. Sherron is your quintessential Hip-Hop snob, seeking to advance the future of the culture while fondly remembering its past.
View all posts by Sherron Shabazz →
This entry was posted in interview and tagged Bru Lei, California, Columbus, Crazy Summer, Crumbs, DJ PRZM, Ohio, Public School Records, Sacramento. Bookmark the permalink.