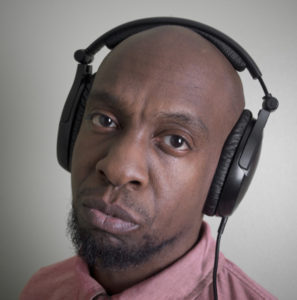 Veteran emcee Blueprint has returned with a new album titled “Two-Headed Monster.” Released on his own Weightless Recordings label, Two-Headed Monster serves as Blueprint’s declaration that he’s the best producer on the mic in Hip-Hop.

Blueprint spoke to The Real Hip-Hop about the importance of being healthy, why good guys gets ignored, and about his new album, Two-Headed Monster.

TRHH: On the title track ‘Two-Headed Monster’ you make the claim that you’re the best at rhyming and producing while showing respect to those who did it greatly before you. What makes you the best two-headed monster?

Blueprint: I would say consistency. I think mostly because when you look at most of the greats they didn’t really have a lot of albums that they produced. Diamond D probably had 3-to-4 real albums. Large Professor took a break but he’s starting to put out a lot more records the last 4-5 years. I would just say consistency and the fact that I think I’m as respected on the rhymes as I am on the beats.

TRHH: On the song ‘Don’t Look Back’ you warn us not to romanticize the past in Hip-Hop. What inspired you to write that song?

Blueprint: I think it’s something where as we get older we kind of have this thing where we automatically look back on everything we were doing as being greater than what we’re doing now. Sometimes it’s true. Sometimes there are things that were better back then. But sometimes when we get caught up in romanticizing everything of the past we’ll miss things that are really dope and going on right under our noses. The song was kind of written to hopefully make people think about making sure that even if you are giving it up for the past that you’re not afraid to live in the moment. You’re not afraid to look around you right now and appreciate everything that’s going on. Life is short and it’s very important that you look around and appreciate the good things that you have going on right now so you can live life to the fullest.

TRHH: On ‘Good Guys Get Ignored’ you talk about how nice guys finish last when dealing with women. It’s something I’ve experienced personally, but in talking to women they say that guys that are boring or unattractive shouldn’t feel like they’re entitled to be with them. How do you respond to that point of view?

Blueprint: First thing I would say is most of the things that women are going to tell guys, especially nice guys, is just not true. The thing about women is the number one rule is don’t believe anything they say, just watch what they do and that will tell you all the answers you need to know. A woman saying, “Oh, I don’t owe you anything,” that still doesn’t address the question, which is why are the nice, straight laced guys getting passed over for the guys who shit on you and why are you now crying and complaining about it all the time to the nice guys and treating the nice guys like shit? That’s the question. They are amazing at diverting attention away, avoiding the question, and not being truthful.

My life changed once I stopped listening to what they say and paid attention to what they do. When you pay attention to what women do you’re like, “Oh, it’s a cold game out here, man.” So I better make sure that I’m on my shit and protecting myself from these realities by making sure that I’m just as savvy as they are. They are masters of telling you what you want to hear. They’ll say, “We want a nice guy,” but they don’t want a nice guy until they get shitted on by all the bad guys or they get fat or get old [laughs]. When they are at their peak they don’t want nothing to do with a nice guy. After they’ve got three kids and gained fifty pounds nice guys start looking real good to them [laughs].

TRHH: [Laughs] I guess it’s kind of like a two-way street because I’ve known women who most guys wouldn’t look at. They’re really nice women but guys are visual and they ain’t trying to holla at them. It works for women too.

Blueprint: It does, but I think it’s a smaller percentage of guys. Most guys have to chase unless you’re super El DeBarge pretty boy, an extra-swole buff dude, or you got status, nine times out of ten you gotta chase. Even the girl who is like a five still gets hollered at. She might not be able to get that guy who is an 8 a 9, or even a 7, but I bet you she still gets hollered at constantly. ‘Cause dudes are probably thinking, “Man, she’s a 5 I know I can bag her,” [laughs]!

TRHH: [Laughs] Let’s move forward. On the song ‘Health is Wealth’ you shared a message that everyone needs to hear, especially in the black community. Why was it important for you to make that song?

Blueprint: Just because of the struggle I’ve had just having those conversations with my own family. You know how it is, man, from diabetes to high blood pressure to everything in between. We don’t make that connection with what we eat and its impact on our health. We just eat to feel good and try to ignore that what we’re eating a lot of the time is the main thing that’s making us sick. I had a lot of struggles over the last 7-8 years just having those conversations with my family and trying to get them to change their habits. I’m just tired of going to the hospital. I’m tired of dealing with it and having people say, “I’m going to do what I want,” and six months later they’re having surgery. It’s rough. That song to me was kind of an opportunity to have this conversation with a wider audience. You can have a lot of things in life, but if you don’t have your health you really don’t have anything. Never take your eyes off of that ball. Whether it’s your job, your relationship, or money, if you don’t have health none of that stuff will last.

TRHH: Is there a certain form of art that you find the most rewarding – producing, emceeing, running the record label, or being an author?

Blueprint: For me it would probably be production but only because when it comes to production that’s something I can do by myself. Sometimes when you don’t feel like being around people but you still want to create, production really lends itself to that. From looking for records, listening to the records, to chopping up the samples, and making beats. These are all things that you don’t really need anyone else’s feedback to do, whereas sometimes I think when it comes to rhyming I look at a rhyme as something everyone else will automatically hear. It’s something that people will interpret because you’re communicating directly with the audience and you’re telling them specific things, where with a beat people can interpret what they want out of it. The mood of it will determine what they think about it. Production to me has always been my favorite part of it. Running a label and things of that nature are things I enjoy only because they allow me to continue my artistry. I don’t necessarily get amped about anything with running a label because it’s just a lot of administrative work [laughs]. This is cool only because it lets me do the artistic work but in and of itself it doesn’t get me amped at all.

TRHH: What’s the greatest lesson you’ve learned in your near twenty years in the music business?

Blueprint: That’s a heavy one. One of the biggest lessons I’ve learned is to work on your craft a little bit every day. Don’t think that you can get it all done at once. I have many things that I try to do but most of it gets done because I take an hour or two or three a day here and there. I don’t have eight hours to work straight on any one project because like I mentioned I still have to do the label stuff and promotion. Just finding out that as long as you’re investing in your craft every day you will eventually be successful. That’s probably the biggest lesson I’ve learned.

TRHH: Who is the Two-Headed Monster for?

Sherron Shabazz is a freelance writer with an intense passion for Hip-Hop culture. Sherron is your quintessential Hip-Hop snob, seeking to advance the future of the culture while fondly remembering its past.
View all posts by Sherron Shabazz →
This entry was posted in interview and tagged Blueprint, Columbus, Don’t Look Back, Good Guys Get Ignored, Greenhouse, Health is Wealth, interview, Ohio, Soul Position, Two-Headed Monster, Weightless Recordings. Bookmark the permalink.