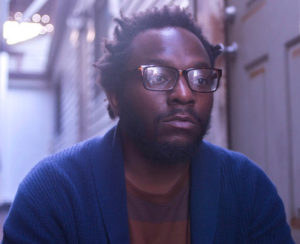 Denmark Vessey has returned with a new album that’s as eclectic as the man himself. “Sun Go Nova” is a project released by Mello Music Group that shows two different sides of Vessey. Volume 1 gives us Denmark Vessey the emcee. Vessey spits his abstract rhymes over tracks produced by Earl Sweatshirt and Knxwledge respectively. Volume 2 gives us Vessey the producer. His hard-hitting but succinct instrumentals provide a captivating glimpse into the creative mind of the Detroit-born artist.

Denmark Vessey chatted with The Real Hip-Hop about working with Earl Sweatshirt and Knxwledge, aspirations for his own career as a producer, and his new album, Sun Go Nova.

TRHH: What’s the meaning behind the title of the album, “Sun Go Nova”?

Denmark Vessey: Sun Go Nova was like an explosion [laughs]. If it was the end of the world or whatever you still have to be happy and keep it moving. I don’t know if that makes any sense but that’s how I was feeling when I came up with the title.

TRHH: How did you link up with Earl Sweatshirt and Knxwledge to create the project?

Denmark Vessey: I met Knwxwledge before I met Earl. I think that’s how Earl got wind of my stuff, through Knwxwledge. I met Knwxwledge at an LRG party a while ago. This was like a little bit after Cult Classic came out. We were friendly and cool. Martin Lucid Dream came out and Earl tweeted about it and I was like, “Wow, I need to meet Earl Sweatshirt, huh?” I flew down there to L.A. and got to kick it with him and meet a lot of his friends. He’s a real cool dude. I met Alchemist through him – I met a lot of people through him.

TRHH: It seems like you’re trying to push the limits with each release. Is that done purposely or organically?

Denmark Vessey: Yeah, I guess so. Sometimes I feel a little loosey goosey and a little weird. Most times trying to have fun is the main thing. If I’m not doing the production I’m saying something that’s going to make me be surprised at myself or I try to make sure ain’t nobody else saying something like that. If that’s pushing the envelope then yes, that’s what I’m trying to do. I don’t go out and say, “I’m going to push the envelope today,” or some weird shit like that.

TRHH: The song “Stolat” stands out to me – it just feels good, but who is the voice sampled on the song?

TRHH: I didn’t know that. That was incredible and it fit perfectly.

Denmark Vessey: Yeah man. I was a huge fan obviously before he passed away. He always had some quotables and something worth reflecting on. I had to add Mr. Gregory.

TRHH: The second half of the album features your production and is really outstanding. How did you come up with the concept to create two different albums in one?

Denmark Vessey: Thanks, man! Appreciate it, dude. I do want to capitalize on the fact that it was those two gentleman and kind of use their name. I feel like this is another thing to attract people to my brand. If people check out the stuff I did with Earl and Knwxwledge they’ll also get the chance to check out the production that I do as well, that I don’t often showcase. The next album that I come out with is definitely going to have 90-to-100% of my production on there. It was just a chance for me to show that side of myself – the arrangement and all that fun stuff. That’s what I was doing anyway before I started rapping.

TRHH: Did you want to make those beats longer and have full songs over them or were they strategically going to be short?

Denmark Vessey: Those beats are already in the ether. I don’t plan on revisiting those. Are you talking about for myself?

Denmark Vessey: Those are just joints that I had that I was comfortable with. Unless somebody wants to buy them or something like that. I’m not going to rehash those. I’m not about to rap over none of those at all. I’d rather come up with something completely new that I haven’t heard of. I’d rather do that stuff because it’s way more exciting to me.

TRHH: The last time we spoke you said you prefer producing to emceeing and wanted to do more on the production side. Do you still feel that way and is Sun Go Nova an example of that?

Denmark Vessey: Yeah, I definitely want to get in a little bit more on the production side. Black Milk does that, Oddisee does that, too. These are two guys that are really well-balanced with both of their disciplines. I’m trying to get in that lane. Not so much the sound, but the fact that they seem to do both very well. I definitely want to showcase that a little more.

TRHH: Who is Sun Go Nova for?

Denmark Vessey: People to buy, man. Sun Go Nova is for people to purchase, listen to, enjoy, and follow me on my journey. It’s for everybody.

Sherron Shabazz is a freelance writer with an intense passion for Hip-Hop culture. Sherron is your quintessential Hip-Hop snob, seeking to advance the future of the culture while fondly remembering its past.
View all posts by Sherron Shabazz →
This entry was posted in interview and tagged Denmark Vessey, Detroit, Earl Sweatshirt, interview, Knxwledge, Mello Music Group, Michigan, New York, Stolat, Sun Go Nova, Trustfall. Bookmark the permalink.