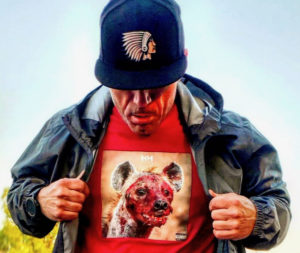 VA emcee Born Unique has teamed up with producer godBLESSbeatz for an album titled, “Holiday Hyena.” The 9-track release is a straight-forward, no frills project catered toward fans of raw beats and raw rhymes.

Born Unique spoke to The Real Hip-Hop about why he’ll never change his style, what it was like working with producer godBLESSbeatz, and his new album, Holiday Hyena.

Born Unique: It’s kind of crazy. It turned into something. I was originally going to call this project “Hyena Breath” just because godBLESS’ style of beats is real dirty and you can only imagine what hyena breath would smell like. I was like, nah. It was going to be “Holiday Pack” and then I said “Holiday Hyena” and the shit kind of rolled off the tongue. You gotta have something else for it to make sense for the project. I started thinking and Holiday Hyena is a holiday that you celebrate. You celebrate for your people that can’t be around and ain’t here with you no more. You celebrate that shit for your people’s that showed you the game and might have taught you a hustle or was just a wild one in a crew that would always get it poppin’. Hyenas roll together, they stick together, they kill together, and they eat together. Basically, Holiday Hyena became a time when you’re reminiscing about your people who ain’t here while you’re doing some old wild shit you’re like, “That’s my hyena right there. I know I can count in him. I know he’s got my back. If I’m starving he’s going to help me go get something to eat.” The cover alone, it just all fit together. It came together nicely.

Born Unique: I just asked him this a while ago. I thought we came across each other on the gram, which that is what happened, but I was on the DJ Eclipse show and he saw my performance and followed me on the social. We exchanged likes and I found out he was a producer and I’m always looking for some new beats. godBLESS got that heat, man. The relationship just formed out of a love for my craft that he saw, and me meeting him and respecting and loving his craft as well. We were like, “Yo, we gotta do something, yo.”

TRHH: What was the process like recording Holiday Hyena?

Born Unique: I live in VA. He’s originally from Chicago but lives in Atlanta. He had moved to VA, which I found out. This is the craziest shit too when I knew it was an official lock with him, and it goes with what you asked me about the recording process. Shout out my engineer, my brother, my partner, my Grime Lord, Pete Twist. That’s where I record all my vocals at. Pete Twist had a studio in Virginia Beach that’s a couple hours from where I’m at. He had moved here from Germany in the late 90s or early 2000s. He had a studio in Norfolk, Virginia and godBLESS was living in Norfolk, Virginia at that time. godBLESS would go to Pete Twist’s studio to record. We didn’t do the project at the same studio. He was sending the beats and I was flying the verses back.

I would fly the verse back from the engineer Pete Twists’s e-mail. He’s looking at the e-mail and said, “That name sounds familiar.” He asked me, “You in VA? I used to live out there. Where you at in Virginia?” I’m like, “I’m in Fredericksburg.” He said, “I used to live out there.” He said, “Is Third Eye Studio Pete Twist? I think I know that dude.” I didn’t really think much of it. I didn’t really know godBLESS at the time. He could have been telling me anything. No disrespect to BLESS, but until you really get to know somebody you don’t know what they could be telling you. So, it kind of went past me. When I seen Twist I asked him and he didn’t really remember godBLESS. godBLESS hit me back and said, “That is him, yo. I still got shit to this day that I recorded in his studio twenty years previous.” I already knew after that, that it was lock. Twist is my fam, so that was just another sign to lock in with him. He was sending me packs of beats, I would go through them and tell him what I liked, send him the vocals, and Pete Twist mixed down the project.

TRHH: How was doing this project different from doing Wimbledon Dons or Red Devil Chronicles?

Born Unique: The first main difference is they were all different producers. Red Devil Chronicles was Lucky Loopiano – shout out Luck. The Grime Lords, which was the Wimbledon Dons, that was me and Pete Twist. Pete did all the beats and I did all the vocals. This project, godBLESS. So, it’s all been different producers. My process is really the same. I get a lot of beats and the beats are hot, but I’m real funny. If the beat don’t make me wanna spit something right then and there I gotta pass on them. Even if the joints is hot. If it don’t grab me in a certain way, and I know the way it grabs me, pause, it’s like, “Yeah, yeah, this is going to be a lock right here.” I feel the shit when I hear it.

TRHH: Snowfall is my favorite song on the album – it just feels different…

Born Unique: Definitely a different feel. I’m glad you picked up on that.

TRHH: How did that song come together?

Born Unique: To be honest, the beat that BLESS sent, that’s what he named the joint – Snowfall. When producers send you beats they got all their own little names for the different beats. The joint was named Snowfall and I just built off of that one. I felt the vibe and started going in talking about moving snow in a slick way. It was jazzy and had a little bop. You can do a little two-step to that kind of joint. I normally do some hard-head shit. This was a little different soundscape. Once I did the first verse it was hard and had a different feel, so I wanted to get different points of views on the record. I didn’t want to do them all. I could have if I had to, but I wanted to get different views. It started off as two.

My man Wais P just came home and it was his kind of swing all day. Wais is a slick talking, fly, motherfucker. Shout out to motherfuckin’ Doza the Drum Dealer. He’s this kid from Brooklyn who has a project out now called “When the Rabbit Got the Gun.” It ain’t fun when the rabbit got the gun. I did a record with him and told him I definitely wanted to get him on something. He’s so versatile with his style that I knew he could do this record. He got a nice cadence and rhythm when he rhymes that I dug. Me and Wais was on the record and I’m playing it back, and playing it back. I seen Doza and I’m fucking with him on the gram, pause. I’m like, “Yo, that’s who I need on this shit.” Just what I thought he was going to do he did. The same with Wais. It was a no-brainer. I wish I had the budget to shoot a real live video with that shit. I’m like, you gotta take this shit to the fuckin’ ski resort. That shit would have been mad fly! Anybody got big bread let’s do the video!

Born Unique: I go back and forth. Bulldawgboys is definitely one of my joints, the intro, it’s kind of hard for me to say. Playback is big to me. It’s a lot of dope emcees, but when I listen to their projects I don’t feel like they took me there in the right order. So, I try to go off the feel of that shit. I like it all, yo. I can’t really say I got a favorite track. I fuck with all the records, but the stands out are Bulldawgboys, the intro, Want What, see I’m going to name all my shit [laughs]. Shout out to everybody that was on the record. DJ Ragz was on there, too. He cut up the joint with my brother Eff Yoo. That’s one of my joins too called “Villain Story.” That’s my next push for this project.

I know projects are mad fast these days – faster than what I’m used to. The way the little scene is now these kids is putting out shit every month or every two months. I get all that, but I’m trying to promote this project. I feel like projects are so fast because cats are putting the music out so fast. You almost have to. Personally, I don’t want to give people too much because there’s even been artists that I’ve liked that it was too saturated that I don’t really check for them no more. I try to keep a balance, man. This ain’t all I do. I work, I got a family, and all that other shit. My time is constructed to have time to do other things. As long as things fall in order in that nature, boom, Im’ma keep working. I got a project that’s seventy percent done with Body Bag Ben. That’s going to be the next project I release. I also got a project that I started working on with DJ Rod from out in Cali and shit.

TRHH: Who is the Holiday Hyena album made for?

Born Unique: Holiday Hyena is made for Hip-Hop lovers. My content sometimes some people ain’t really into all of that. It’s for motherfuckers that been through something, motherfuckers that hustle, street dudes, and suburb dudes that love Hip-Hop. Everybody that really loves Hip-Hop and can hear my energy, my emotion, pain, and how I deliver the message – that’s who it’s for. The supporters that support me – that’s who it’s for. I been doing this shit for a long time. I never changed who Born Unique was. From when motherfuckers who knew who Born Unique was, that’s who he is still to this day. Same content, same style, same bop, all of that.

I do it for the cats who have seen me the whole time because I see a lot of artists try to do whatever is popping at the moment and they kind of lose themselves. Now they want to come back and fans is funny with that shit. I appreciate all the fans, I like to call them supporters. I feel an obligation to them, especially the ones who show, prove, and buy my shit. This is what you’re going to get from me every time. Maybe you want something different from Born Unique so you don’t mess with Born no more, that’s cool too. Born Unique gonna give you that same shit every time. You know what you’re going to get fucking with me. There won’t be no surprises. Snowfall was a different record for me, but it was still that shit. I didn’t go way over here where it wasn’t me. Shout out to everybody that supports the kid and boom, I got a couple more in me.

Sherron Shabazz is a freelance writer with an intense passion for Hip-Hop culture. Sherron is your quintessential Hip-Hop snob, seeking to advance the future of the culture while fondly remembering its past.
View all posts by Sherron Shabazz →
This entry was posted in interview and tagged Born Unique, Bulldawgboys, DMV, godBLESSbeatz, Grime Lords, Holiday Hyena, interview, Red Devil Chronicles, Snowfall, VA, Villain Story, Virginia, Wimbledon Dons. Bookmark the permalink.