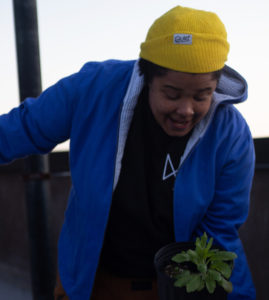 Nappy Nina has been making a name for herself with a string of critically acclaimed projects. Born in Oakland, CA, but now residing in the borough of Biggie, Nina has magically meshed together the styles of both coasts to create something familiar, yet entirely new. Nappy Nina’s latest album is a celebration of her experiences and revolutions around the sun.

30 Bag is a 7-track release produced entirely by Unjust. The project, released by LucidHaus, features appearances by her LucidHaus labelmate, Stas THEE Boss, and maassai.

Nappy Nina spoke to The Real Hip-Hop about how being quarantined has helped her pen game, the process of learning to balance her career and her love life, and her new album, 30 Bag.

Nappy Nina: I released it on my thirtieth birthday. On this project I’m talking a lot more shit than I normally do and I kind of felt like I was getting in a different bag, so to say.

TRHH: So, what changed? Why were you talking more shit this time around?

Nappy Nina: [Laughs] I don’t know. I think my last two albums, “The Tree Act” and “Dumb Doubt,” there is definitely moments in there where I’m talking shit, but those projects overall are more messaged based. I feel like with 30 Bag though there are things that I’m trying to get across there, there’s a lot of ra-ra in there, which I haven’t been including lately.

TRHH: Six months after Dumb Doubt you dropped 30 Bag; how is 30 Bag different musically than Dumb Doubt and why did you drop them so close to each other?

Nappy Nina: Musically 30 Bag is completely different. Working with Unjust, the producer, all of his beats are heavily sampled. They’re reminiscent of boom bap. Whereas with Dumb Doubt none of the beats were sampled. Most of the instruments were played live. The sound is completely different. Hip-Hip has loved the other shit, but the O.G. Hip-Hop dudes are loving 30 Bag. I think it definitely has a different feel. I made the whole project during quarantine. I had nothing else to do. I didn’t really have a way to celebrate my birthday. Birthday’s aren’t that big to me, but turning 30 was a real monument and I just wanted to have a way to celebrate, even if I was just in the crib.

TRHH: 30 is a monumental age. I’m 44 now, but when I turned 30 everyone told me I was would be depressed. I wasn’t. I had a great time, but about a year later the depression kicked in [laughs].

TRHH: I think it’s because you have this thing in your head that by the time you’re thirty you’re supposed to do X, Y, and Z, but you don’t. If you’re living your life the way you want to you probably won’t have that, but be on the lookout [laughs].

TRHH: Have you found yourself writing more during quarantine?

Nappy Nina: Yeah. Definitely. I have so much time. Normally I’m not here to listen to beats 12 hours a day. I’ve been completely way more productive. I wrote everything on 30 Bag in a notebook, which I haven’t done in a while. It kind of is representative of the amount of time that I have. I wasn’t typing on my phone. I was longhand writing everything out by pen, which I hadn’t done for a while, I think that also lent itself to sounding a little bit different.

TRHH: Do you have a preferred method of writing between the phone and the notepad?

Nappy Nina: I think the notepad is my favorite. I don’t normally have that access, even though it’s something so simple. Just being in my place and having my own things, yeah, I definitely prefer a notepad.

TRHH: Going back to the last project, the song and video for “Good to Me” was brief but creative. Are they both based on real life experiences?

Nappy Nina: Yes, “Good to Me” is definitely based on my romantic relationship changing when I was touring and my career started getting serious. That’s what that song is based off of.

TRHH: Have you found a middle ground or some type of peace with relationships at this stage of your career?

Nappy Nina: No [laughs]. Definitely not. I think I’m exploring in recent years. With my literal schedule changing and me becoming more serious with my artistry, I think I’ve just been exploring what that actually means for a romantic relationship. I’m chillin’. I’m still cool about it, but there are growing pains entering this stage.

TRHH: On the song “Modesty” you say “maybe I don’t want to be heard.” Explain that lyric. Do you feel conflicted about being an artist?

Nappy Nina: No, I don’t feel conflicted. That song in particular with maassai, who is my favorite rapper from Brooklyn, is like there is a certain kind of modesty that we’re told to have and move through this game with. I think it’s hard to ride the line of knowing you’re good, doing this thing well, and being loud about that, and just doing the thing well and not saying anything. That’s kind of what that song is about.

TRHH: Your voice is ill, your flow, and your lyrics. It’s really hard to compare you to anyone else. How would you describe the Nappy Nina sound?

Nappy Nina: I have that question in my mind all the time – who do I sound like? I don’t know. I think my sound is a good mixture of east Oakland and Brooklyn. My sound really lends itself to both places. I don’t even know how to describe my sound [laughs]. I just know that I listen to my favorite rappers and subconsciously and consciously take my favorite things from them and made it my own thing, I guess.

TRHH: Who are your favorite rappers?

Nappy Nina: So, so many. Recently and always, Ishmael of Shabazz Palaces and Digable Planets is one of my favorites, Stas THEE Boss, Missy Elliott is always on my top list, and the old Jay-Z. I really like this dude lojii from Philly. Really my favorite rappers are folks that I listen to most, who are a lot of people that I’m surrounded by right now. Medhane, MIKE, and this whole little Brooklyn thing that’s happening, those are some of my favorite rappers. Isaiah Rashad is one my favorites – I can’t leave him out.

TRHH: Why do you say old Jay-Z [laughs]?

Nappy Nina: Well, because he doesn’t rap anymore. I like Jay-Z the rapper. On 4:44 I thought the production was amazing and he had a few bars on there where I felt like he was really doing the thing again. It’s not his prerogative. I’m not mad at it, but I don’t love the artist who he is now.

TRHH: What’s next up for Nappy Nina? What do you have coming up for the rest of the year?

Nappy Nina: Who knows? What do any of us have? I was going to be on a tour, but it’s cancelled. I’ll probably try to shoot some videos for 30 Bag and just come with the visuals, and I have some features coming out later this year.

Sherron Shabazz is a freelance writer with an intense passion for Hip-Hop culture. Sherron is your quintessential Hip-Hop snob, seeking to advance the future of the culture while fondly remembering its past.
View all posts by Sherron Shabazz →
This entry was posted in interview and tagged 30 Bag, Brooklyn, California, Dumb Doubt, Extra Ordinary, Good to Me, interview, LucidHaus, Modesty, Nappy Nina, Naptime, New York, Oakland, The Tree Act, Unjust. Bookmark the permalink.