Brittney Carter: As I Am 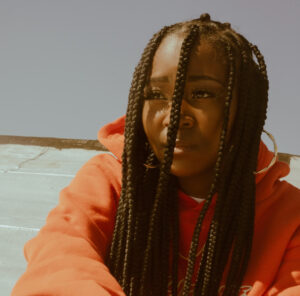 Brittney Carter is one of the best young artists in Hip-Hop. The Chicago native created her own buzz by releasing videos of original songs and freestyles. Her distinct voice and meaningful music caught the ear of veteran Chicago emcee Navarro, who is also the founder of the artist development and management company, Loop Theory. Carter joined Loop Theory to create one of the most eagerly anticipated releases of 2020, “As I Am.”

As I Am is a 9-track album produced by Scud One, Vadim, Elements, Heir Porter, and Ill Brown. The release features appearances by Hot Rod, Oliv Blu, and Navarro.

Brittney Carter spoke to The Real Hip-Hop about her goals as an artist, how she gained confidence as an emcee, and her debut album, As I Am.

TRHH: I met you a year ago at a show and you told me the album would drop in October. As I Am did drop in October and has received critical acclaim. How does it feel to achieve this goal and have people love what you created?

Brittney Carter: It was surreal [laughs]. I tried not to have any expectations coming in. My goal was to just create something that felt good to me and met my standard. I was just happy to know that people from all over were tuning in and really listening to what I had to say.

TRHH: What’s the meaning behind the title of the album, As I Am?

Brittney Carter: It wasn’t anything too deep. I had went through a series of other titles and this was one was more of me saying “this is who I am, take me as I am right now.”

TRHH: On the song “Cold As Us” you speak on your place in Hip-Hop. You start the song out saying, “It ain’t my fault that I’m better,” which is so dope. At what point did you become confident in your skills?

Brittney Carter: Man, it’s something that’s constantly growing. I know in the beginning when I first started I didn’t have much confidence, just for the fact that I hadn’t been doing it long. I felt that I had to have X amount of years in it in order to be considered just good enough. Over time I just kind of had to figure out what success meant to me and what I was going into this wanting. That’s kind of how I just slowly built my confidence.

TRHH: So, what is success to you? What do you want?

Brittney Carter: To me, it’s being able to be financially stable, to do the things I love, to spend time with my family, and to create music that touches other people. A lot of people say not to make music for other people, but I just feel like everything that I create, even though it’s originally for me, somebody else is going to relate to it.

TRHH: On the song “Happened So Fast” you speak about your career trajectory. What was the moment when you realized that this was real and you could make a career out of rapping?

Brittney Carter: Oh man, November 2018. That was when I got the opportunity to open up for Jay Rock and I was like, “Oh!” [laughs]. At the time I didn’t have any music out on any platforms. I was like, “Oh shit, I can really make this a career.”

TRHH: You’re a young person, but your style is kind of 90s. Who inspired your style as an emcee?

TRHH: Some of your mentors are veterans in the Chicago Hip-Hop scene, Navarro and Add-2. What’s the best advice they’ve given you about this business of Hip-Hop?

Brittney Carter: As far as the business goes, to have people around you that you trust. I try not to conduct too much business with people who I don’t personally trust. When you’re conducting business there has to be a certain level of trust and understanding, and if it doesn’t feel comfortable to you, then get up out of the jam.

TRHH: What’s your favorite song on As I Am?

Brittney Carter: Oooh, as of today I’m going to have to go with “All I Want.”

Brittney Carter: That’s the song right now that I’ve been re-listening to. It was really cool writing it. At the time when I wrote it I had never written anything that sounded like it. It felt like I was pushing myself creatively, so that was really tight.

TRHH: What’s your ultimate goal in the music industry?

Brittney Carter: Oh man, I just really wanna create music that speaks to other people. I think that’s the easiest way to get my music shared and for people to just relate. I just want to make music that touches other people, that people can listen to, vibe to, and connect with.

Purchase: Brittney Carter – As I Am

Sherron Shabazz is a freelance writer with an intense passion for Hip-Hop culture. Sherron is your quintessential Hip-Hop snob, seeking to advance the future of the culture while fondly remembering its past.
View all posts by Sherron Shabazz →
This entry was posted in interview and tagged All I Want, As I Am, Brittney Carter, Chicago, Cold As Us, Happened So Fast, Illinois, interview, Loop Theory, Prove Em Wrong. Bookmark the permalink.