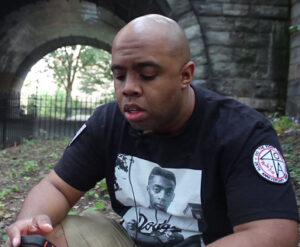 In the summer of 2020 Hip-Hop lost the incredibly talented producer and emcee Todd Sykes. The Tacoma, Washington native was proficient at chopping up old jazz samples and turning them into eargasms for boom bap enthusiasts. Sykes’ friend and fellow emcee, Verse Essential, put together a collection of their unreleased songs in a complete package called, “Moment of Clarity.”

Moment of Clarity is a 12-track album produced entirely by Todd Sykes. The album features guest appearances by J.D. Nero, Access Immortal, Jukstapose, and the late Todd Sykes himself.

Verse Essential spoke to The Real Hip-Hop about the things he loves and hates about rap music, the legacy of his late friend and producer Todd Sykes, and their album, Moment of Clarity.

TRHH: Why did you call the new album Moment of Clarity?

Verse Essential: Because it’s really that. When I hooked up with Todd back in 2009 we worked together on some joints off my first mixtape “Ingenious” and the Ingenious Deluxe Edition and we just kept working ever since. When we started working on this album it was just a moment of clarity. I felt that title right from the jump. When I told Todd about it he was like, “Yo, let’s do this.”

TRHH: What was it about his sound that drew you to Todd Sykes?

Verse Essential: His samples. The types of samples he chose. The way his beats hit, it was a good fit, man. Shout out my man Access Immortal, the first track I did with Todd it was a song off of one of his projects. I asked him, “Yo, who did that beat?” He told me who it was and it just went from there. When I reached out to him and told him his stuff was dope he said, “Thank you, I got more stuff.” He kept sending me tracks and the idea just came about. I was like, “Yo, we need to do this album together” and we did it.

TRHH: The song “Broken” kicks off the album and was created ten years ago. How many of the vocals on the album are new and how many are from back then?

Verse Essential: The whole album was recorded in 2011.

TRHH: Wow. Did Todd’s passing inspire you to hurry up and release Moment of Clarity?

Verse Essential: It was a big push. It was a big, big push. We finished the album in 2011, but I had some projects that I was putting out that I was real busy with, and he had a lot of stuff going on with him, too. It was one of those moments where we did the album but we had other stuff to do. We never got a chance to do any of it, but when Todd passed I was like, “Oh my god, no one has heard this album. It’s time to release this.” I wish he could be here to see how much people love the album. His passing was really a big push for me to put it out. I wouldn’t say I hurried up because I had to dig up the songs, listen to them, see if it was a good idea. The more I kept listening I feel like Todd’s spirit was pushing me like, “The songs are dope. It’s time.”

TRHH: “I’m Doing Just Fine” is a breakup song that we rarely hear in Hip-Hop today…

TRHH: Yeah, we rarely hear stuff like that today. I mean, how many breakup songs have you heard in rap?

TRHH: [Laughs] Is that joint based on a true story?

Verse Essential: Very true. That was a tough moment in my life. When I got out of that relationship she was all I knew. I was with her for so long. That’s why I said, “Ten years of sacrifice.” One big influence in writing that record was Mary J. Blige’s “Not Gon’ Cry.” I always loved that record. I love how she sung it. I felt her pain on that song. So, when I got that particular beat from Todd I was like, “Okay, I gotta approach this in a special way.” Because the beat is dope. The first time I heard the beat I was like, “This beat is insane!” That’s the thing about Todd, I’ll get an email from out of nowhere and he’d say, “I made this the other day” and I’d say, “You made this the other day?” When I heard the song “I’m Doing Just Fine” it was really that because I figured I was going to write about how I felt at this particular moment in my life.

Some parts of the song are brutal. Some parts I just let it all out. It became that and I’m happy I wrote the song, because a lot of people are going through situations like that or have gone through situations like that. I think in everyone’s life you’re going to have that one relationship where the breakup is not going to be pretty. That song is really for them and it’s for me. The part of the song that hit me the most was when I said, “My selfish ways broke us up/But being along gave me a chance to grow up” meaning that I accept fault in this. It wasn’t that type of record where I put all the fault on her, because it wasn’t all her fault. Some of the fault is really on me. Being alone, broken up, and broken hearted gave me a chance to grow up. I feel like I showed a sense of maturity on the record, even in a situation as bad as that.

TRHH: There’s a lesson in everything.

TRHH: On the song “Jack of All Trades” you have a line where you say, “This rap shit, you know I love it and I hate it.” What exactly do you love and hate about rap?

Verse Essential: That’s a good question, bro. I love it because I’ve been listening to rap since I was 8 or 9 years old. Back when it was the Fat Boys and Kool Moe Dee. Then you had Kane, EPMD, and Public Enemy burst onto the scene and that was it for me. When Nas, Big Pun, Biggie, Wu-Tang, Tribe, Pac, and Outkast came, I couldn’t help but love it. I still love it. I hate the politics that go along with this. I hate that you see really good talent don’t get the shine that they deserve, and you see some other artists and just be like, “Alright, what’s going on here?” You can clearly see this guy doesn’t know what he’s doing and meanwhile they’re getting more attention than the ones who should get all the attention.

I hate everything with the labels and of course industry rule number 4080. Take De La Soul for example, they’re going through so much trouble with Tommy Boy and most of their catalog that we love can’t even get streamed on Apple Music today because of all their troubles. I hate the politics and I hate the fact that artists are getting robbed, artists stole from artists, and all these politics take away from the creative process. That’s why I said, “This rap shit, you know I love it and I hate it” because seeing all these things going on in rap music you’re like, “Why do I have to deal with this?” With anything in life there is a pro and a con. I don’t think there is anything that doesn’t have a pro and a con. That’s what I meant when I said that in the verse.

TRHH: What should people who aren’t familiar with Todd Sykes know about his legacy in Hip-Hop?

Verse Essential: He didn’t work with just me, he worked with a bunch of people! Todd was a genius. He was a genius at what he did. He had that touch. What I loved about Todd, the type of beats he would give to me, he wouldn’t give that to the next person. Everybody that he worked with sounds different. At the same time, you could tell this is a Todd Sykes production. For people that don’t know, I feel like Moment of Clarity is a good start so people can really hear his sound. He took his time with everything that he made. I still have other tracks from me and Todd that I have never released. Putting Moment of Clarity together was difficult, because I had all this work to listen to. Hip-Hop has changed so much since 2011. I feel like my album, and of course all the other work that he has is a good legacy for him. It shows his versatility, his diversity, and he was just a talented dude — super-talented.

TRHH: Who is the Moment of Clarity album made for?

Verse Essential: It’s made for him and for me. When we first put the album together we both had that moment of clarity, and when he passed, that was it. That’s why on the cover it’s his face. I didn’t want my face on the cover at all. My name is there because you hear my voice, but I wanted the whole forefront of this album to be for Todd. For me, Moment of Clarity is Todd’s eulogy. This is his legacy. What really made the album worthwhile was when his brother reached out to me, and his aunt and grandmother both reached out to me on Facebook. They said, “What you’re doing with this album we love it so much, and we love the fact that you’re keeping his legacy and his name alive.” That was the whole point of the project.

Even though we did these songs prior to all of his, for them to reach out to me and tell me that, that alone made all the work of putting the songs together, getting them mastered, arranging them the right way, and making sure everything sounds the way it’s supposed to sound, made it all worthwhile. I feel like when you’re an artist you have to be for the people. I’m for the people. The people are taking time out of their schedules for you – to listen to your stuff and to enjoy what you’re trying to make. The whole project is for them. It’s his legacy and I’m honored that he chose me all those years ago to say, “Let’s do this.” When I spoke to his grandmother she said, “He looked up to you as well. He always talked about you.” It was emotional.

Sherron Shabazz is a freelance writer with an intense passion for Hip-Hop culture. Sherron is your quintessential Hip-Hop snob, seeking to advance the future of the culture while fondly remembering its past.
View all posts by Sherron Shabazz →
This entry was posted in interview and tagged Broken, interview, I’m Doing Just Fine, Jack of All Trades, Moment of Clarity, New York, Queens, Tacoma, Todd Sykes, Verse Essential, Verse Essential & Todd Sykes, Washington. Bookmark the permalink.