Cannibal Ox: Blade of the Ronin

Posted on September 28, 2015 by Sherron Shabazz 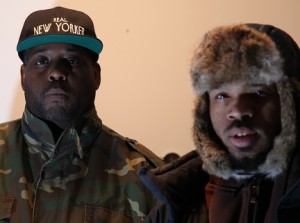 Vast Aire and Vordul Mega are Cannibal Ox. In 2001 the duo released their critically acclaimed debut album “The Cold Vein” on the Definitive Jux record label. Since then Vast and Mega parted ways with the label and its founder and Cold Vein’s producer, El-P. Both members of Cannibal Ox released solo material and appeared on each other’s projects over the years, but an official Cannibal Ox album wouldn’t materialize until 2015.

One half of Cannibal Ox, Vast Aire, spoke to The Real Hip-Hop about the group’s current North American tour, their relationship with Def Jux co-founder, El-P, and their new album, Blade of the Ronin.

TRHH: Why’d it take so long for you guys to drop your sophomore album?

Vast Aire: We both wanted it to be on our terms. We did a project that pretty much took off. It’s not supposed to overshadow our other ideas, plans, and things of that nature. It’s pretty much like us waiting on The Purple Tape. We all want Ghost and Rae to do a whole album again. We all been waiting on that, but they’ve given us music together because they belong to a crew together. That’s the same thing that happened with me and Mega. We’ve given consistent music, it just hasn’t been a full-length. Around 2012 the idea came up to do the full-length. This was literally after we did the joint with Raekwon. Everyone was amped, we were in a good energy and it was like, yo, let’s start building a new record. Building a new record on our terms was around a couple of years ago. The fans wanted it two weeks after Cold Vein [laughs]. I think it was just about the timing. It was more about the timing and being in a good creative space, and being able to sit back and say this is what we wanted as a follow-up to that.

TRHH: Explain the title of the new album, “Blade of the Ronin”.

Vast Aire: It’s close to our dominant metaphor which is a blade. Our dominant metaphor has always been something sharp, or a blade, an ox. In the hood a blade is an ox. We might as well be saying “Ox of the Ronin”. We always had an affinity with sharpness, being on point with the lyrics. It’s a lyrical sharpness. The tongue is a sword. We try to come with that metaphoric energy. The Ronin is the ill samurai that doesn’t have any allegiance to any clan lords anymore. But they still have all those skills so they would become mercenaries, ninjas, drunks, or savages. We’re part of that community where we have civilization and we have the skills to maneuver the weapons. We just happened to be the good guys. We’re the good Ronin, we’re the good outcasts. Blade of the Ronin is the blade of the outcast, or the tongue of the outcast.

TRHH: How is this album different from The Cold Vein?

Vast Aire: I think maturity and I think experience. We’re more experienced on how to make albums. They’re both going to be great in their own way. I feel like Cold Vein is more of a prodigy, a hunger. We were running on such hunger. Blade of the Ronin is a comfortable, mature, so much experience – it’s less blind. We know exactly what we wanna do and where we wanna go.

TRHH: On the single “Harlem Knights” you spit the rhyme about Jibril in the cave — that was dope, man.

TRHH: Tell me about the song Harlem Knights.

Vast Aire: Harlem Knights is pretty much again, us playing with a double meaning. It’s night time, but it’s also the night of the warrior. We’re the warriors of Harlem that hang out at night. It’s like a double meaning. It’s just us on the block playing dice, playing dominoes, smoking joints – doin’ us. It’s just a real good vibe. Harlem is a special neighborhood. Out of all the neighborhoods that I grew up in, in New York, Harlem is a unique special area. It’s where I became a man. When we were doing the song we just had the vibe of going back to our old neighborhood and feeling it out and having fun with it. That’s why there’s fun lines in there, there’s serious lines in there, and we’re going back to our childhood in certain lines. We’re just reppin’ our hood, Harlem Knights, and we just do it in our creative way.

TRHH: What led to you guys leaving Def Jux?

TRHH: Do you still have a relationship with El-P?

TRHH: You guys are currently out on the Blade of Ronin tour. What can fans expect to see when they come to the show?

Vast Aire: Just live raw Hip-Hop. Honest performances. Everybody that knows us they know that we come hard. We come from the heart, we come from the soul. There is a genuine vibe. I think the live show is what really brings our music across. That’s what makes people fall in love with us, when they see us live. The tour has been a blast so far. We’ve been working real hard and just knockin’ ‘em out. It’s beautiful to see the kids come out, the new fans, and the old fans. It’s just dope.

TRHH: Who is Blade of the Ronin for?

Vast Aire: The Blade of the Ronin album is for the real Hip-Hop head. It’s for the real head that basically grew up listening to the realest stuff from the KRS-One’s to the Wu-Tang’s to the Nas’, to the Jay-Z’s, to the Brand Nubian’s – all of that. That’s who Blade of the Ronin is for. It’s for the real Hip-Hop head. That’s all I can really say. There is no beating around the bush, this is a real head-nod record. It’s very introspective but it sounds like an animal. You can just zone out to the beats and then end up paying attention to what we’re saying and be like, “Yo, what is goin’ on?” It’s an experience. It’s a ride. It’s for the car. If you love the car this album is crazy in the car. You get to zone out and really enjoy the mix. We busted our ass with the mixing and mastering. It’s just layered for the headphones and the car systems. It’s powerful.

See Cannibal Ox live on the Blade of the Ronin tour:

Sherron Shabazz is a freelance writer with an intense passion for Hip-Hop culture. Sherron is your quintessential Hip-Hop snob, seeking to advance the future of the culture while fondly remembering its past.
View all posts by Sherron Shabazz →
This entry was posted in interview and tagged Blade of the Ronin, Blade of the Ronin tour, Cannibal Ox, Harlem Knights, interview, The Cold Vein, Vast Aire, Vordul Mega. Bookmark the permalink.