Posted on December 2, 2019 by Sherron Shabazz 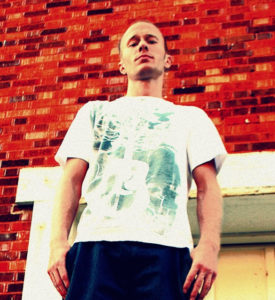 Cas Metah spoke to The Real Hip-Hop about the Columbus Hip-Hop scene, why he walked away from religion, and his latest album, Guest Room 2.

TRHH: Why did it take you ten years to release a sequel to Guest Room?

Cas Metah: That’s a good question. It didn’t necessarily take me ten years. I didn’t really know I was going to do a sequel. I just do so many collaborations. That’s kind of how the first Guest Room happened. Friends of mine might be touring and fall through Ohio so I’ll hit them up. “Yo, don’t get a hotel. Save your money and stay at my house!” I used to look out for homies like that. “Jump in the booth and leave me a 16.” That’s how the original Guest Room got started.

I had about four or five songs and none of them really fit the solo album I was working on. Similarly, with the second one I was just organically doing features and once I had a handful I was like, “Man, I’m about to do a Guest Room 2.” Once I started really putting it together it was several years after so it wasn’t a planned thing. Once it was done it was mixed and mastered about a year and a half before I released it. I knew I was close to that ten year mark so I was going to wait and just drop it on the anniversary. It just happened organically.

TRHH: How long did it take you to put together Guest Room 2?

Cas Metah: Over the course of some years. I would guess three or four years. I can’t remember. I remember the first album better, honestly. I did the first cut in ’03, it was finished in ’07, and it sat on the shelf at the label for two years waiting its turn to come out. I signed with a label, Illect, and they already had a bunch of stuff coming out. This one, I feel like I probably starting working on some of those songs in 2015-2016 maybe and it came out in 2019. Four years sounds about right.

TRHH: How expensive is it to do a project with all these features?

Cas Metah: Not too bad, man, because honestly, I only paid the big dogs you would expect – Yuk, Ras, Ahmad. A lot of the other features are just the homies, so people do stuff for me for free. The first album cost me a lot more because I was still relatively unknown back then. My relationships weren’t as thick back then. The first album cost me ten g’s. I remember doing all the math on it after features, producers, mixing, and mastering. That was over the course of a few years paying out here and there. This one I tried not to make it steep.

It was probably closer to 3 or 4000 with beats and everything. It depends. You can make it as expensive or as deep as you want it to be. Based on relationships that I have some of those people that I might have paid ten years ago I don’t have to pay now just because we’re friends now. We’ve built a true relationship and they know that I will drop a verse for them for free, too. Some people might be your friend and they still want pay because this is what they do for a living. Every case is treated differently, I guess. It just depends on who you’ve got on there.

TRHH: On the song “Bang” you’re critical of new schoolers in your verse, was there a specific incident that inspired you to write that rhyme?

Cas Metah: Probably not a specific incident. I heard Ras Kass say recently in an interview that the mainstream only let’s two lyrical dudes be on at the same time. Back in the day it was like Big and Pac or Nas and Jay-Z. Now it’s Kendrick and J. Cole. They only want to have a couple of dudes out there who actually have some substance in their rhymes. Maybe I don’t turn on the radio enough. I honestly don’t really listen to it anymore because I know what to expect on there and I know where to get what I want to hear. Nothing specific, man. I don’t like wack emcees. It was just another one of those braggadocio moments where I was going to go in on these guys [laughs].

TRHH: What’s the Columbus Hip-Hop scene like? Because with artists like Blueprint, Illogic, and yourself, it seems to be a place where most of the artists put substance in their music.

Cas Metah: Wow, yeah. I think so. I think we do. There’s a little bit of everything here. As far as people that are more than just local, that’s part of the problem, there’s a lot of really talented dudes who don’t really travel or try to push themselves nationwide or worldwide. You’re right. I don’t know what it is, man. Maybe it’s something in the water? Or maybe it’s because we know that because we’re not from the east coast or the west coast or the south, we were the last area of the country to get on and get respect, so we know we have to come that much harder to get respect and for people to pay attention to us. You can’t be weak with the lyrics, man. You gotta have something to say when you’re out here.

TRHH: On the song “Off Those Meds” you said, “I didn’t walk away from God, I walked away from religion” explain that line.

Cas Metah: Yes sir. I really wasn’t raised in the church. I’m from Ohio and it’s that area where you’re going to get taught about Jesus. There are youth groups and things of that nature, so coming up as a kid that was something I gravitated towards – spirituality. I just got a little bit older and the more I actually read my bible and came to grips with what Jesus was really about, it wasn’t the same thing that I was being taught in my religious groups. They pick apart all the other stuff. If you read it you know what I’m talking about.

Religions really aren’t Christ-like, if that makes sense. I’m still a spiritual person is what that says. I’ve always believed that there’s something greater out there, but the way that y’all religious folk are breaking it down, I don’t quite believe everything that you have to say about it. I’ll have to interpret it to my own understanding, that’s what that song was about. Getting off those meds, that brainwashing of western philosophy of religion.

TRHH: You’ve been doing this for over fifteen years, what advice would you give to an up and coming independent Hip-Hop artist?

Cas Metah: Oh, man. I’ve been doing for it even longer than that. On a level to where you’re actually out there doing it there are so many things. You have to be a one-man band, dude. You have to be more than just an artist. If you can’t navigate how to book shows, how to run your social media effectively, if you’re not good at networking, all these things factor in. I meet so many dudes who are raw. Raw spitters. They’re iller than me. I’ll tell them, “You’re probably doper than me, but you don’t have all these extra tools in that tool belt that will help you get to that next phase, because all you’re worried about is being dope.”

The main thing I try to express to people is to get the Batman utility belt. Have every tool in there! You gotta be your own manager, your own booking guy, and your own publicity. Maybe you get a friend to help do that stuff, cool. Once you build yourself up and start getting followers you’re going to need that team. In the beginning if you don’t do that stuff on your own your chances of getting anywhere are few and far between.

TRHH: So, it’s not necessarily about the music?

Cas Metah: Man, nah. I’m not going to name drop because I’m not a hater, but that’s why you have so and so at the forefront in your face right now. It’s not because they’re dope, it’s because they grinded harder than the next man. They worked! A lot of it’s money. The bold face facts of it is you gotta buy your way into the industry. Everybody knows that everyone getting major radio spins are paying for those spins. It’s pay to play. It just depends on how far you want to go. That’s why I try to do organic relationships and build with people. If you like the music, cool. Let’s build. If I like you and you’re not a dick, cool, let’s build and we can go both ways and genuinely be friends.

It’s so much further than the music, bro. I’ve made so many good friends that if I go out of town I can crash at their house or they can come here. That’s a good feeling to have, bro, when you really connect with people. That’s what life’s all about, bro, relationships and connecting. The music is just the catalyst to bring the people together. That’s what it’s about for me. It’s about connecting with people.

Cas Metah: Wooo, man, I got a lot of projects that I’m working on. I don’t really want to talk about all of them. I stay working, so the next thing that you’re going to see from me is possibly the Pow Bundy album, which is myself and Blast Mega, another dope emcee from Columbus. We have a duo project completely produced by a dude named E21 out of New Jersey. It’s just boom bap bangers. It’s dope, man. It’s hopefully going to be the next thing you hear. If not, I got a solo album that’s pretty much done, it just needs to be mixed. Those will be the next two things for people to check out from Cas Metah.

Sherron Shabazz is a freelance writer with an intense passion for Hip-Hop culture. Sherron is your quintessential Hip-Hop snob, seeking to advance the future of the culture while fondly remembering its past.
View all posts by Sherron Shabazz →
This entry was posted in interview and tagged Bang, Cas Metah, Columbus, Field Specialists, Guest Room 2, interview, Off Those Meds, Ohio, Pow Bundy, Scribbling Idiots. Bookmark the permalink.