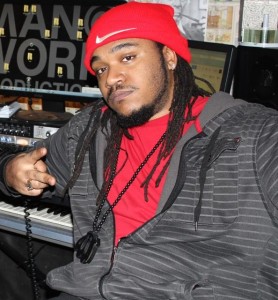 Chordz Cordero and Sir Manley are HighBred. From Jamaica Queens and Muskegon, Michigan respectively, the duo teamed up to create a full-length album that fuses Hip-Hop with Soul. The project, titled “The HighBred LP” not only intends to usher in a new sound, but also a movement.

One half of HighBred, Chordz Cordero spoke to The Real Hip-Hop about joining forces with his partner in rhyme Sir Manley, the impression left by his late mentor, Pumpkinhead, and his new album, The HighBred LP.

TRHH: How did you guys come together to decide to do this album?

Chordz Cordero: We were introduced by a mutual friend of ours. I was in Michigan visiting a friend of mine and we got in the lab and had a nice conversation. Those conversations turned into a similar love for music. We worked on a couple of joints and I pitched the idea of working on an EP. We were gonna do an EP of his beats with me rhyming on it and him dropping a feature or something like that. But then he came with the idea of having a different producer take care of the whole project. He sent me some beats from this guy named Boonie Mayfield out of Colorado. I loved what I heard. He sent me four originally and we extended those to six. We loved those so much that we decided to do a whole album.

Chordz Cordero: It’s actually a few meanings behind it. It’s a hybrid of two different styles – my style and his style being brought together. He’s originally from the west coast and I’m from the east so we have that going on. The “High” is for a higher state of mind, and a higher state of being, and higher quality. “Bred” is the future offspring that will change the world. Put those together you got the new HighBred – the new people that are here to change the art, break the barriers down, and change the world.

TRHH: Tell me about the single “How I See“.

Chordz Cordero: We were having a conversation about different views and perspectives in life. His views were a little different from my views. I wanted to make a song that was telling stories from different lives. It fit perfect. I didn’t want to have a hook that was too complex so we made it simple. We wanted to have that be the first single. We did a couple listening sessions and that was one that was a favorite so we wanted to push that out first.

TRHH: With both of you being in different states what was the recording process like for this album?

Chordz Cordero: I went back and forth to Michigan. We did everything in his studio at his house. He had an open door policy. I was there so much we’d knock out 4-5 joints at a time. Everything was organic. I took two trips to finish and a third trip to do some videos for the album. Everything was in the studio. We didn’t do any e-mailing back and forth. We had a good time, it was organic, and the chemistry was there.

TRHH: Pumpkinhead is featured on the album. Talk about your relationship with him and how his passing affected you.

Chordz Cordero: Ah man. Pumpkinhead was like my big brother. He took me under the wing a while ago and showed me a lot of ins and outs in the game. I wanted to have him on the project because this was going to be one of my first official projects to come out. Him always co-signing me with everything I did I wanted to make sure that his presence was felt in anything I did from then on. I worked with him so much that it was pretty much like a favor. He showed me love on the verse and did his thing. Our relationship was a strong one. We spent a lot of time together inside and outside the studio. It was a lot of camaraderie there. I met his family and people he considered brothers and close personal friends. His influence on us made us a big family even after his passing. I can’t say anything bad about the man. He definitely affected my life and other people’s lives. He touched so many lives. You wonder did he just affect yours and you hear all of those stories and are like, wow. It’s a whole new meaning and a whole new connection. I wanted to make sure that his presence is always felt from here on out with my projects. The album wouldn’t have been complete without his verse on there.

TRHH: On the single “Original” you’re doing some singing. Talk about how that song came together and your background being a vocalist.

Chordz Cordero: I’ve been a vocalist as far as I can remember. I actually started off as a singer, then I got into emceeing, and then production a little later. That would probably be the strong suit – songwriting and singing. As far as Originals, that came about by another conversation about how the game has changed so much. The love for the music has changed and we saw that early. We had a conversation about how there used to be different cyphers in the park, watching Hip-Hop evolve into something great, seeing it at its peak, and missing something great. It’s pretty much like a reminiscing song talking about how we wished the game would still be like when we loved it so much.

TRHH: Why do you think the game has changed and is there anything you love about it now?

Chordz Cordero: I’m not completely disgusted with the game – I can’t lie about that. There are certain artists that have definitely shown me that the creativity and the passion is still there, so I definitely acknowledge and appreciate those artists. I’m not really big on radio play. A lot of the artists that I listen to happen to be in similar circles. I can’t say that I’m completely disgusted with the game, I like the way that it’s going. There is a lot of potential that can be made. I love the creativity. I love the direction that it’s going back to. I feel like there is a cycle thing happening. I feel like there is a certain peak of consciousness, a peak of flossing, a peak of political issues, and it goes back and forth. I feel like the people who love music or have a passion for the art are finally getting their voices heard again. I feel like it’s a good time for the game.

TRHH: What can fans expect to hear on The HighBred LP?

Chordz Cordero: A vast variety of different works. We have R&B on there, thought-provoking songs, retrospective songs, uplifting songs where we’re telling people that they can do what they wanna do, but we try not to make it too cliché. Just a lot of positive vibes, diversity, live instrumentation, good lyricism, good featured artists, and just an overall solid project. I’m very proud of this work right here. I feel like it’s a good listen front to back.

Sherron Shabazz is a freelance writer with an intense passion for Hip-Hop culture. Sherron is your quintessential Hip-Hop snob, seeking to advance the future of the culture while fondly remembering its past.
View all posts by Sherron Shabazz →
This entry was posted in interview and tagged Boonie Mayfield, Chordz Cordero, Chordz Cordero & Sir Manley, HighBred, How I See, interview, Jamaica Queens, Michigan, Muskegon, New York, Original, Queens, Sir Manley, The HighBred LP. Bookmark the permalink.