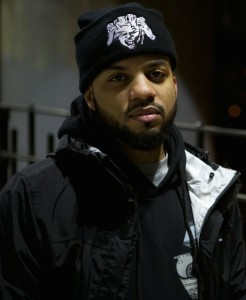 Washington Heights emcee Pearl Gates rhymes with a purpose – to let listeners see that in between the grit and the dirt many jewels can be unearthed. Gates’ first official release on Below System Records “Diamond Mind” is a modern throwback, meshing current day stories of life in the Big Apple over a golden era boom bap sound.

The Real Hip-Hop spoke to Pearl Gates about his musical inspirations, working with the eMC crew, and his new EP, Diamond Mind.

TRHH: Explain the title of the new album, Diamond Mind.

TRHH: What struggles did you encounter coming up?

Pearl Gates: Basically being from Washington Heights it’s a very involved with the drug trade. My neighborhood is largely populated by a demographic that has connections with other worlds.  The Heights is like a port. You got the Dominican’s and the whole Tri-State area so just the relationships, the steps, and having access to that was very prevalent. Just like any other hood you can easily lose your way and be influenced by things you see around you. There were things I couldn’t afford and I’d see people pull up in my neighborhood in expensive cars, and having expensive tastes. I’m kind of circumventing the surface and thinking deeper beyond that — what the meaning of life is, what’s important, and what to value under those circumstances. That’s why I wanted to highlight that with Diamond Mind. The concept is freeing yourself from that and becoming one with your third eye and really seeing the reality for what it’s worth.

TRHH: How is Diamond Mind different from A Star in a Broken Sky?

Pearl Gates: I think A Star in a Broken Sky was in a darker place. I was actually involved with a lot of stuff that I would rather not mention. I say that to say that it brought out a side of me that was very dark. This one is more illuminated. There is more understanding of purpose on this project.

Pearl Gates: Man, I would say the first person that really inspired me, emceeing wasn’t his strongest suit and that would be RZA. I heard RZA on “Triumph” and I lost my mind. The way he described how his beats travel from the speaker to your cerebral cortex was so vivid in my mind. The very next day I was writing rhymes. I wasn’t even a teenager yet, I was 11-12 years old. That was my first inspiration. As I got older I appreciated Nas very much.

TRHH: Nas is your favorite emcee?

Pearl Gates: Yeah, Nas is definitely my favorite emcee. That’s number one right there. I also have a lot of 2Pac influence, and even the people I rock with like Wordsworth and Masta Ace. That’s pretty much it. Other than people I really mess with, I listen to all forms of music and I write different genres for other artists so I keep my mind open in that sense.

TRHH: You mentioned Wordsworth and Masta Ace, you have members of eMC on the album and you worked with them on Fly Thoughts. What’s it like working with Stricklin, Wordsworth, and Masta Ace?

Pearl Gates: Oh man, it’s great. Not only are they ill emcees but they’re great people. It’s great to work with artists that after so much time in the game they’re still excited about it and approach it like its brand new. It’s pretty dope to me. I think the experience has been great working with them, the professionalism, and their character. When you think about all their contributions to the game it’s a blessing to be able to work with people of that caliber.

TRHH: How’d you get the name Pearl Gates?

Pearl Gates: The way RZA was painting his picture on the Triumph joint was very vivid and it did something to me. It changed my thought process. I was very poetic at that time. The way I came up with it was like, there are two types of rappers the more I listened – the God emcees like Nas, Biggie, and Hov, and there are ordinary rappers. I didn’t want to jump the gun and consider myself a God emcee, but I didn’t feel like I was just an ordinary dude doing it. So really what separates the God’s from the mortals is the pearly gates of heaven. I just dropped that “y” and kept it as Pearl Gates. I wanted to at least lyrically be a standard.

TRHH: Have you ever met RZA?

Pearl Gates: I’ve never met RZA, man. It would be dope to meet him and work with him.

TRHH: That would be a dope thing to tell him. It’s funny you mentioned RZA because he’s one of my all-time favorite emcees…

Pearl Gates: Yeah, he’s been so many different types of artist. He’s been Bobby Digital, Prince Rakeem, so many things. What’s he’s done with the production is legendary. Being in that crew he got overlooked by other emcees in the crew but he’s dope.

TRHH: Definitely. And his style is unique. Have you ever heard the verse he did on “Dangerous Mindz” off the second Gravediggaz album? It’s one of the greatest verses I’ve ever heard.

TRHH: He destroyed it, man. That album came out a few months after Wu-Tang Forever.

Pearl Gates: So he was on the same wave as far as writing?

Pearl Gates: I’ll check that out. I like the joint he did with MF Doom, too. He’s got so many verses. He’s definitely underrated.

TRHH: I think so, too. Who would you say that Diamond Mind is for?

Pearl Gates: I think it’s for people that want to hear quality rap music. That’s all it is. Really highlighting that thing of Diamond Mind and the third eye and having that perspective clear through all the bullshit that you go through in your life, that’s what it is. It’s a reflection of me putting my best foot forward as far as delivering from that third eye. I wanted to make it fun, clever, and also something that you could listen to from a Hip-Hop standpoint and enjoy it. I think it’s for whoever wants to find that quality rap music and enjoy it.

Pearl Gates: I got a new album coming out in May. I’ll be going on tour in Europe possibly. I have a whole bunch of radio show with satellite radio and a couple of interviews. It’s going to be a busy year, for sure.

Sherron Shabazz is a freelance writer with an intense passion for Hip-Hop culture. Sherron is your quintessential Hip-Hop snob, seeking to advance the future of the culture while fondly remembering its past.
View all posts by Sherron Shabazz →
This entry was posted in interview and tagged A Star in a Broken Sky, Below System Records, Diamond Mind, EP, interview, New York, Pearl Gates, Washington Heights. Bookmark the permalink.