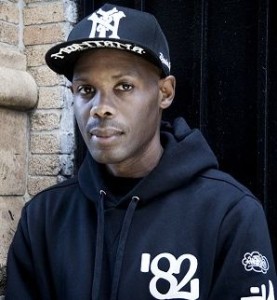 Veteran emcee Cormega is back with his first studio album in five years titled “Mega Philosophy”. The critically acclaimed release is classic Cormega with his “less is more” approach to emceeing that gives the listener food for thought in every verse.

The album’s first single ‘Industry’ finds Mega pulling back the curtain on the music business. The Queens emcee raps on Industry, “When Styles made ‘I Get High’ it was playing all day/When Styles made ‘I’m Black’ it didn’t get enough play/ I guess they got a problem with anything positive/It doesn’t make sense if it doesn’t bring dollars in.”

Cormega spoke to The Real Hip-Hop about working with Large Professor, his quest for positivity in his life and in his music, the recent protests in Ferguson, Missouri, and his new album, Mega Philosophy.

TRHH: Explain the title of your new album, ‘Mega Philosophy’.

TRHH: Why’d you decide to have Large Professor produce the entire project?

Cormega: I mean, he’s Large Professor. That was an opportunity that was just worth it. I had to seize that opportunity.

TRHH: You say some real heavy stuff on the single ‘Industry’. Talk about what inspired that song.

Cormega: I guess the industry did. That song is nothing but me putting a mirror to the industry. It’s me talking about what I’ve seen and speaking on reality. I’m just saying some point blank, accurate, factual stuff that if you give it a little bit of thought, not even a lot of thought, you’ll tend to agree with me. I had to do it tastefully and in a way that doesn’t come across as some dude that’s mad at the industry ‘cause that’s the not case. I’m actually able to make a living from the industry but I’m not going to conform to the bull crap that I see.

TRHH: Well you never really have in your career. When I think of Cormega I don’t think of somebody who has conformed to industry norms ever.

Cormega: Thank you, I try not to.

Cormega: Mine. When I did ‘Industry’ I just wanted to have something on there that was monumental and something that drove home what I was trying to say. I heard what Farrakhan was saying and it just complimented the song perfectly and I was blown away by it. It was perfect. So I put it together and the rest was history.

TRHH: When did you discover Islam and how has it changed your life?

Cormega: I don’t know when I discovered Islam. Islam has always been there. It’s not about discovering Islam, it’s about embracing Islam. There’s many branches of it. You have Nation of Islam, you have the Nation of Gods and Earths, and you have traditional Muslims. I’ve always been fascinated with Islam. Some of the figures from rap that were into Islam whether it was Rakim, Kane, or Kool G Rap are some of the greatest emcees of all-time. If you name ten of the greatest emcees of all-time probably 8 of them were either affiliated or influenced by Islam. That’s just something that’s going to make any emcee take note that’s going to be great. I think it’s impacted my life in a lot of ways. It makes me strive to be a more positive person. It pushes me to be disciplined and it makes me humble myself. In this day and age when Islam is criticized by the media and given a bad light due to the actions of a few, I feel like it’s more of an incentive for positive Muslims to show how positive they are and to contribute to the world in a positive manner.

TRHH: Speaking of positivity, you have a song on the album with Nature called ‘Divine Unity’. You and Nature have a history of beef. What led to you two squashing the beef and doing a song together?

Cormega: I think that’s a misconception. Me and Nature don’t have a history of beef. We just had a disagreement. A history of a beef is America and Russia [laughs]. We didn’t have a long stretched out period of differences and animosity. It was very short lived. We just had misunderstandings. Me and him have been cool for a very long time. We didn’t even squash nothing ‘cause it was nothing to squash. Me and him been cool for many, many years. The idea of doing a record was to show people that we’re bigger than grudges and it’s about unity. We understand our legacy and where we come from – not just the era but the community that we come from. We’re trying to set the bar and lead by example. I’m going to remix that song and try to get as many people as possible on it.

TRHH: You also squashed your issues with Nas some years ago. Take me back to what you thought the first time you heard ‘One Love’.

Cormega: I really don’t feel like answering that. That’s one of those questions that I answered so many times that it feels out of place to answer in 2014. Whenever somebody gives you love you always appreciate that. I’ll say that, but I’m just tired of talking about all that stuff.

TRHH: Okay, what’s your opinion on the situation in St. Louis? A guy in New York was choked out by the cops and obviously Mike Brown in St. Louis was shot and killed — it seems like the late 80s all over again. What’s your opinion on the current situations going on where seemingly innocent unarmed black men are being murdered by the police over nothing?

Cormega: I don’t think that there was ever a point where there’s been police hostility and brutality toward minorities and there was a cease or a point where it lessened. I think what has happened in recent years is the technological boom has caused the world to take notice in different situations. Nowadays when things happen people have their phones and their phones have cameras in them and the cameras are very good quality. What was once compressed and swept under the rug is hard to do now when nearly everybody has a camera in their phone.

I think America really needs to be ashamed of itself. If the country was a person it needs to put its head down in shame. This country was built by slave masters and its laws were made by slave masters. Its laws were governed by people that adhere to the rules and abide by the rules with a slave master mentality. So when the police come to urban neighborhoods they have the look on their face like hunters. I see it myself. Their eyes are wide as they stare through the window of their car, driving by slowly looking at you. You could just be minding your business eating an ice cream cone. You could be the most innocent guy. You might be an entrepreneur, a doctor, a lawyer, they don’t know what you are but they just look at you like that.

The racial lines are drawn and there is a contempt for people of color that has never disappeared. America gives off the illusion of one community, but it’s only an illusion. The reality is racism is as alive and prominent as it’s ever been. It’s just there are different ways to manifest now. There’s different ways to oppress, exploit, and enslave. The police have always had hostility toward people in the community and now it’s just being manifested. The thing that’s different now is people are getting tired of it. Police scare people. Their aura, energy level and way they conduct themselves is like they’re a secret army to themselves. People are tired of that and now people are trying to rebel. St. Louis is a reflection of people being tired. The fact that it’s unarmed innocent brothers that this is happening to is making people rebel. That’s what we’re seeing right now.

TRHH: Why is it important for you to speak on social issues in your music?

Cormega: I really don’t know. To be honest I don’t know why it’s important. I have no answer for that. When I do stuff I do it from the heart. I don’t know if my music will make a difference in the world. I don’t know if my words will change what’s happening in the world, but I know my words will reveal what’s happening. My words depict what I’m seeing and what I’m feeling. When I write, I write from a perspective of somebody that’s seeing it – a narrator or a journalist. I’m giving people an in depth look at my world, my thoughts, and my ideologies. That’s what it is. I don’t know what impact the music will have, that’s for the people to decide. I just do what I feel is right.

TRHH: Why is Mega Philosophy an important album in 2014?

Cormega: I think Mega Philosophy is the voice of a lot of people. I think it’s the voice of the voiceless. I think it’s for the people that are frustrated with rap, but not totally against rap. I think there is a growing number of people that want to embrace rap. They want to listen to content and substance that they can relate to but they wasn’t getting it. I think it was a breath of fresh air and the reason I’m using that term is because I’ve seen it used many times by fans. If you go on my Twitter timeline you can see the response from the people. The people have spoken. A lot of people said it’s the album of the year. A lot of people are just saying “Thank you for this album.” I’ve never had people tell me “thank you” for an album. The response from the fans has been inspiring. I’m humbled, appreciative, and in awe by the response – that’s how I feel.

I felt like I was going to lose a lot of people with this album because I was talking some other stuff and sometimes people ain’t ready for that. There are some people that I lost, obviously. No matter what you do you’re always going to lose people. But I’ve gained so many. This is my best-selling album in years. It’s the biggest buzz I had in years and I didn’t even have to diss anybody, say any names, be disrespectful, or cause controversy. All I did was speak facts and my theories on things. The song ‘Industry’ was released on May 20. Here we are in August and you still see ‘Industry’ everywhere in social media and people are still talking about it around the world. For that song to do that in 2014 where hot records die out in a week is amazing. I’m definitely taken aback by the response. I’d be lying if I said I knew it would be embraced like this. I had no idea. I’m really thankful.

Sherron Shabazz is a freelance writer with an intense passion for Hip-Hop culture. Sherron is your quintessential Hip-Hop snob, seeking to advance the future of the culture while fondly remembering its past.
View all posts by Sherron Shabazz →
This entry was posted in interview and tagged Cormega, Industry, interview, Large Professor, Mega Philosophy. Bookmark the permalink.