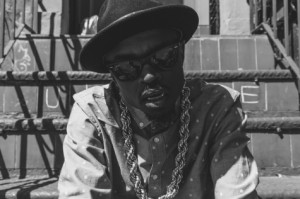 Born in Jackson, Mississippi and now residing in Dallas, Texas producer/emcee 7evenThirty came on the scene in 2012 with his concept album, Heaven’s Computer. The futuristic album introduced 7even to the rap world and took him musically to outer space. With his recently sophomore album “The Problem” 7evenThirty has come back to earth to speak on our planet and its ills.

The Problem is produced entirely by Mello Music Group producer Gensu Dean, who also happens to be a Jackson, Mississippi native that relocated to Dallas. The project features a single guest appearance by Duck Down recording artist Sean Price on the song ‘Hook Heavy’.

The Real Hip-Hop spoke to 7evenThirty about joining forces with Gensu Dean, working with the incomparable Sean Price, and his new album, The Problem.

TRHH: Why’d you title your new album ‘The Problem’?

7evenThirty: The original idea for it was a 4 track EP – kind of like a holdover EP until the next full album. I originally titled it “The Problem” because I wanted it to be a showcase of me as a producer and a rapper. Like the slang definition of “the problem”, 7evenThirty is a problem for other emcees. Then it kind of grew into a bigger concept when I decided to bring Gensu in as the producer and do it as a whole project. The concept of The Problem grew from being just a slang term. It’s still representative of the slang term but it’s also talking about “the problem” as in issues in the community, particularly the black community.

TRHH: How’d you and Gensu Dean get together to decide to work on this project?

7evenThirty: Gensu and I are from the same hometown. Now we currently live in Texas. We kind of reunited in Dallas. Me, Gensu, my wife, and his wife all hang out. I was letting him hear some of the ideas that I had in mind for an upcoming project. My wife said, “Have y’all thought about working together? What if you got Gensu to do the beats?” We decided that it was a cool idea because we always wanted to work together anyway. We had a couple of tracks together that was on some of his projects. We found our chemistry by then anyway so we decided to do the whole joint together.

7evenThirty: It was after the album was just about completed. All of the verses were done and we were in the mixing process of the album. We still stuck with the concept of it being me on all of the lyrics with no features, but we thought it would be cool to do at least one really strong feature. I thought about Sean Price because he’s one of my favorite rappers right now. I was going through tracks to see what track would be good enough to suit a strong feature. I thought about that ‘Hook Heavy’ track and thought Sean would just sound beastly on this track. We reached out to him through the label. He was already familiar with Mello Music Group and he thought it was a good idea to do something. He said, “Let me hear the track first and I’ll let you know if I can rock with it.” We sent him the track and he thought it was dope. He did his verse and sent it back that night. When he sent the track back to Gensu he said, “Tell 7evenThirty that this shit was dope and if y’all wanna do a video I’m down to do that too. Just hit me up.”

7evenThirty: Yeah, and it meant a lot coming from him because he’s a hard cat to impress. He ain’t that easily impressed with too many people so that went a long way.

TRHH: How is this album different from Heaven’s Computer?

7evenThirty: Heaven’s Computer was very purposely done as a concept record. It was a specific concept storyline — a fictitious sci-fi, soundtrack, storyline to that whole album. Me and the producers that I worked with on that album took it as far out as we could take it and followed the storyline concept. It’s basically a sci-fi, graphic novel, comic book type approach to it. We took it very seriously so it’s like you’re listening to a movie. The Problem is more stripped down. There are no skits like on Heaven’s Computer, there are no special effects, there is no sci-fi artwork or soundscape to it. It’s less synthesizers and things involved, less voice acting — it’s straight beats and raps. As Dean would say he has many different chambers in his production so he could get crazy wild with the beats to fit my personality. He refers to me as a quirky and eccentric kind of artist so he has beats to match those different chambers. He was throwing me some of the craziest unorthodox beats with the craziest beats per minute that he could throw at me that he knew that I could rock. He may not give those to Planet Asia, Roc Marciano, David Banner, or Large Professor. He has beats that he crafts for those guys too, but for The Problem every beat was hand crafted with my personality in mind. Even though it’s just beats and raps it feels just as crazy and weird as Heaven’s Computer is.

TRHH: What was the recording process like with you and Dean?

7evenThirty: Dean has so many beats and all of them are dope. It’s weird the way he works. He doesn’t make any beats normally with anybody else around and I don’t really record vocals with anybody else around. We would get together and pick out samples and beats, which he never does with any other artist that he ever works with. I had the honor and the privilege to sit around with him and say, “That sample is dope, let’s do something with that.” Or he’ll already have something in the vault that nobody has heard before and I’ll say, “That’s dope, let’s do something with that.” When I got ready to write to each song he would send me one track at a time through Dropbox and I would write to it at home in solitude and send it back to him. I told him not to send me any other beats until I sent him the finished version. I had to execute it one at a time for me to stay on task. If he sent me a folder full of beats I wouldn’t get anything done because I would literally sit around and listen to the instrumentals because they were dope. I wouldn’t focus on either one. My attention span isn’t the greatest so I have to do these kind of tricks to keep focused on one at a time.

TRHH: How would you compare the Hip-Hop scene in Jackson to the scene in Dallas?

7evenThirty: That’s a good question. Jackson is more of a smaller city so everybody knows each other and it’s really close knit. Everybody is very creative. We have a lot of creative artists coming out of Jackson but Jackson as a city doesn’t have the monetary resources that a city like Dallas has. On the flip side of that, Dallas has access to the major monetary resources that a major city would have, but the scene as far as the artists go is not as close knit as the artist scene in Jackson. Dallas is a bigger city so everything is more spread out. You may see a whole slew of different artists and it isn’t like Jackson where you have the main artist running the scene on a regular basis. In Dallas it’s less close knit than Jackson is.

TRHH: How’d you develop your style of emceeing?

7evenThirty: I have a lot of different influences that I pull from over the years. I’ve been writing since ’96. When you’re forming any kind of craft you kind of emulate who you’re inspired by. You can tell very loud and clear in my earlier works who I was inspired by. You’re going to hear Andre 3000, Busta Rhymes, Eminem, Ol’ Dirty and shit like that. It’s very obvious who my influences are in my earlier recordings. Over the years you kind of learn to listen to your own voice. The way that I did that was I stopped listening to all my favorite artists. I stopped listening to Outkast, I stopped listening to Dirty, Busta, and all the Hip-Hop artists that I knew had a major influence on me. I kind of forced myself to listen to myself and that happened during the Heaven’s Computer album. I found that as a result I may have my subconscious influences thrown into this pot, a kind of creative gumbo, but the story was told through my voice. I can express it as myself and at the same time I figured out a way to give homage to people that influenced me like Dilla, I loved the way Dilla wrote rhymes and I would give homage to Dilla without necessarily sounding like him. I would give homage to Outkast and Wu-Tang without necessarily sounding like Outkast and Wu-Tang. It’s to the point now where I can listen to my inner self and what you hear is what came out of it.

TRHH: What do you hope to accomplish with The Problem?

7evenThirty: Even though it’s not a concept record there is an underlying theme. I feel like The Problem is way more of an accessible album than Heaven’s Computer is. Heaven’s Computer is more like a niche market – your comic book readers, sci-fi, anime, nerd group. With The Problem it’s a way more accessible album with tracks like ‘$ Stacks & Body Bags’, ‘Filthy Rich’ and the single ‘Hook Heavy’. I wanna draw people in with that but there is this underlying message that you get when you listen to the album. It’s a time of great turmoil with the situation in St. Louis with Mike Brown, the brother Eric Garner that got choked out in New York, and John Crawford that got shot in a Wal-Mart in Ohio for holding an air gun. This type shit has always been happening but I guess it’s more evident now with technology. People with cell phones and cameras make it a little more in your face now. My objective with The Problem is to play my part in keeping my message out there and keeping people’s eyes and ears open to what’s really going on and start to find some solutions to these problems.

Sherron Shabazz is a freelance writer with an intense passion for Hip-Hop culture. Sherron is your quintessential Hip-Hop snob, seeking to advance the future of the culture while fondly remembering its past.
View all posts by Sherron Shabazz →
This entry was posted in interview and tagged 7evenThirty, Dallas, Gensu Dean, Heaven’s Computer, Hook Heavy, interview, The Problem. Bookmark the permalink.