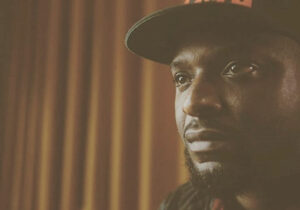 Philadelphia emcee Dell-P kicked off 2020 with an album called “Make Emceeing Great Again.” MEGA is a multi-faceted release that finds Dell on a crusade to put lyrics back in the forefront in Hip-Hop. The album contains music that would please fans of boom bap, conscious rap, story-telling, and club bangers.

Dell-P spoke to The Real Hip-Hop about why he doesn’t use profanity in his music, the importance of unity in the black community, and his album, Make Emceeing Great Again.

Dell-P: Well, with the current state of the world as far as all the senseless violence, women degrading themselves, and the drug using music, that’s why it’s not great right now. I’m thinking of the time when I grew up we had Brand Nubian, A Tribe Called Quest, Public Enemy, KRS-One, they were giving us knowledge of self. Right now, it seems like everybody is trying to follow the same wave. That’s why I feel like we need to make emceeing great again. That’ll better the community if messages such as stopping the violence and unifying the community were out there. That will definitely make our situation greater.

TRHH: Why do you think those messages stopped on a mainstream level and aren’t being spread to the youth?

Dell-P: I feel as though it’s an inside job to poison the youth, because a lot of big-name people are invested in these prisons. In order to make that investment work you gotta have a certain type of message out here influencing the youth to wanna kill and wanna sell drugs. Think about all the artists that were promoting drugs recently, their children are graduating from school and those artists graduated from college, but they’re pushing the narrative that they were the ultimate hustler or the ultimate shooter. That’s not really what they’re into. They’re saying, “It’s just entertainment,” but they aren’t thinking of the young boy that’s out here listening to their music every day believing every word that they’re saying.

TRHH: On the song “Follow the Signs” the chorus says, “Unify or die/Let’s build each other up instead of crucify.” Who exactly are those words meant for?

Dell-P: That’s meant for our people. That’s meant for us. Let’s build each other up. I’m seeing bad news traveling fast. When somebody dies it’s, “Oh my god, they were such a dope artist” or “I was just with them” but when they were out here trying to push and complete the mission nobody’s saying nothing. So, instead of crucifying people while they’re alive and glorifying them and celebrating them when they’re going, let’s do that now. Don’t wait until I’m gone to say, “Damn, Dell was dope.”

TRHH: How would you compare MEGA to your last album Wordsmith?

Dell-P: It’s all about advancement to me. My first album came out in 2013, Redefined. Every album I matured as far as the wordplay, the delivery, and the mixes. I feel like every album it gets better. Wordsmith was my baby. A lot of people who have been following my art say MEGA is the best one.

TRHH: I saw an interview you did where you said you don’t use curse words in your songs. It’s not something I even noticed. Is it easier or harder for you to write clean songs?

Dell-P: [Laughs] Nah, it’s actually easy. It came like water. The funny thing is, I never really cursed a lot anyway. So, when my grandma brought this to my attention about the n-word I decided to take it a step further and completely stop cursing so I could take that parental advisory sticker off the music. When they have events for the community all ages can enjoy it. It was easy for me.

TRHH: That might be my top 5 from Philly! Between Schoolly D and Bahamadia it would be tight. That’s it right there.

Dell-P: Schoolly D, that’s my big homie. Shout out to Schoolly D for what he did for the city.

TRHH: On the song “Barry O” you say, “Telling me a lot about you if still would vote for him/These trying times sure could use a guy like Barry O again.” Barack Obama has been painted by some as a failure and the reason why we have Trump. Why do you think we could use a guy like Obama again?

Dell-P: Because first of all, he’s compassionate. He can try to say it a million times that he’s not a racist and he did more for black people than any other president, but we know this guy Donald Trump is completely racist. We know because in the 80s he put an ad in the paper to try to get five innocent young men locked up for a rape that they didn’t do – I’m talking about the Central Park Five. As far as Barack Obama, he was definitely trying to make some changes but you gotta think about who he’s up against when he’s trying to pass certain laws and bills. The racist people who are a big part of that decision are saying, “No, we aren’t going to do this.” Whereas if Trump came with those same bills they’re going to approve it. That’s why I said, “These trying times sure could use a guy like Barry O again” because he was more for the people. Trump is for his audience. We need somebody for the people instead of a divider.

Dell-P: Oh man, right now currently we got “Follow the Signs.” It’s on BET Jams and on MTV also. I have a single with a pop star out of Australia, Niramsin, called “How You Like.” It’s also on national TV. We’re pushing those two singles right now. It’s a crazy wave of violence going on in Philadelphia. I don’t know if you know, but we’re right behind Chicago as far as senseless violence and children and women being murdered. I got a song on my album MEGA called “By Any Means” and I’m going to shoot a video for that and make sure it reaches every platform it possibly can, because we’ve got to do something about that. There are a couple of documentaries coming out trying to get people to campaign. My song “Follow the Signs” is the intro – that’s a blessing. I’ve got a couple of placements for movie soundtracks, that’s what we’re doing this year.

We’re trying to end it off with a bang and get people who look like us to vote, because they’re trying to throw the monkey wrench saying, “If we vote for Biden he’s just as bad as Trump.” No, no, no he’s not! I wish the internet would stop trying to put out those messages and memes because people these days are easily, easily persuaded. That’s my mission for the rest of the year, to get people to smarten up and stop following what everybody is trying to put out here with Trump being better than Biden. Trump said that he was going to persuade the black people by the end of his first term to be in his corner. That’s exactly what seems like is going on and we can’t have that. He’s an opportunist, a racist, and he’s the reason why a lot of this stuff is going down as far as the cop killings. They feel like, “We got Trump in office, we can do whatever we want.” They’re showing their hand right now. The only thing I like about this Trump situation is we don’t have to wonder if somebody is feeling some type of way about us. They’re letting it be known, because the Commander-in-Chief is letting it be known as well. We gotta change that. That’s the mission, bro.

Sherron Shabazz is a freelance writer with an intense passion for Hip-Hop culture. Sherron is your quintessential Hip-Hop snob, seeking to advance the future of the culture while fondly remembering its past.
View all posts by Sherron Shabazz →
This entry was posted in interview and tagged Barry O, Dell-P, Follow the Signs, interview, Make Emceeing Great Again, MEGA, Pennsylvania, Philadelphia, Ruffnation Records, Wordsmith. Bookmark the permalink.