Posted on November 2, 2020 by Sherron Shabazz 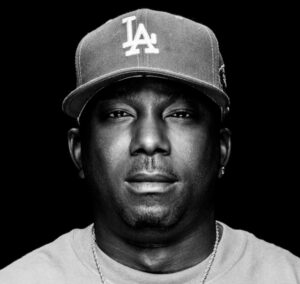 Legendary lyricist Ras Kass is back with a new album firmly planted in the spirit of real Hip-Hop called, “I’m Not Clearing Shxt.” The album contains samples that, well, aren’t very likely to get cleared. So, Ras Kass took it upon himself to bypass the red tape and give the people what they want. I’m Not Clearing Shxt is scheduled for a November 6, 2020 release.

The Real Hip-Hop had the pleasure of speaking with Ras Kass about false equivalences being made between Presidential candidates Donald Trump and Joe Biden, past issues with sample clearances, and his new album, I’m Not Clearing Shxt.

TRHH: Did you intend to make a project of un-clearable samples or were these just songs that you had in the stash?

Ras Kass: No. I had long had the idea for “Chuck Berry.” Then I wanted to flip “Jailhouse Rock.” I had a couple of iterations before, but no producer could quite give me what I was trying to do until Omid actually pulled it together. There were a few other standouts that I had production-wise that I liked. The Mandalorian – I just thought it would be an ill sample flip. It was mostly me wanting to use samples that I liked, but realizing, especially as an independent artist, the odds of me being able to clear these things is slim and nothing. There is no point in me going to radio with it, I’m not even going to iTunes with it because they would pull it off immediately. Not everything on the project is completely un-clearable. Some things aren’t even sampled. It just started as a platform to create a playlist of things that were initially un-clearable. The rest was just stuff that I felt made sense with the project.

TRHH: How much have sample clearances slowed down the release of your music in the past?

Ras Kass: They haven’t really. My first four major label records were pretty good at flying under the radar. I was always taught, “Do it, and if they sue you, by the time they sue you it must mean you did a really good job.” There are a few things that suffered. On Rasassination we sampled “The Ballad of Dorothy Parker” for “Lapdance” and it was so dope. That’s the original record and we couldn’t clear it because Prince notoriously didn’t really clear samples. I wish he would have. I don’t have a copy of the original, but it was such a really dope record. Ironically, on the Van Gogh album I had a song “Kiss U” and we sampled the Beatles, which was my label, and that’s their golden calf so they wouldn’t let me clear the Beatles, so, I had to take that out. It never really slowed things up. You get a pretty good indication about what’s realistic and what’s not. You take the sample out and you do what you gotta do.

TRHH: The first single “Five Mikes” is classic Ras Kass because it’s so clever. How long did it take you to write a song like that and did more Mike’s come to mind after you laid your vocals?

Ras Kass: I had more Mike’s in mind before I laid the vocals – as I was writing it. I wrote Five Mike’s in fifteen minutes. I’m a fast writer. I’ve been told that. I tend to write fast. I knew the song would get too long. I didn’t want a long record. Because it’s a banging beat, but tempo-wise I didn’t want to lose people’s attention. I wanted to hit it, quit it, and leave on a high note. So, the other way to incorporate those other Mike’s was to do the shout outs. I do Michael Rappaport, Mike D from the Beastie Boys, Michael Jai White, whatever. I do a total of 20 Mike’s in the entire song. The last three are at the end of the song.

TRHH: The song “Level Up” features Kool Keith and Ice-T. I remember Ice-T being in your “Ghetto Fabulous” video. What’s it like working with an icon like Ice?

Ras Kass: Before I had a record deal and was trying to make a name for myself in L.A. Ice was one of the first people that was inclusive and invited me to come to the studio. He showed me love. To go from somebody who I looked up to and bought their albums, to really somebody who I consider a big brother and mentor, I’m appreciative. He gives me advice. I call him and talk about regular real shit – life shit – and he gives me feedback. Nowadays it’s awesome to give him platforms that you may not expect to hear him on. It’s cool to kind of A&R and do interesting records with Ice. It’s really awesome.

TRHH: “Animal Crackers” might be my favorite joint on the project. What’s your favorite song on I’m Not Clearing Shxt?

Ras Kass: I like Chuck Berry. I just think flipping that sample and what it stands for, it kind of goes in with the culture vulture, not stealing shit, and keeping it to the roots and naming it Chuck Berry. There’s actually Prince in that record. The second half of the verse has the guitar solo from “Let’s Go Crazy.” We flipped that at the end. I just think it’s an ill record.

TRHH: On the song “Culture Vulture” you said, “Niggas ridicule greatness when you’re alive/Then worship your images when you die.” Why do you think it’s so hard, especially in Hip-Hop, for people to show love while someone is still walking the earth?

Ras Kass: Because the love wasn’t sincere in the first place. I think we’re fascinating with regret – especially in black American culture. There is a lot backbiting. As my mom and grandma would say, “crabs in a barrel.” And then after the person is gone there is this regret. Even now it’s more sensationalized. Biggie called it on “You’re Nobody (Til Somebody Kills You).” People just want to show pictures of them reacting to you – people that didn’t love you. Because that brings importance to them. It’s not about you anymore. They want to be a part of what’s in. If your death is what people are talking about, then they want to be a part of that. It’s grotesque.

TRHH: It is. At the start of 2017 you and I spoke about the election of Trump and you said there was a false equivalence that people were making between Hillary and Trump. Almost four years later, are you surprised that people on the left are demonizing Joe Biden and Kamala Harris?

Ras Kass: I’m not a big fan of Kamala Harris or Biden, but I am surprised that they would do another false equivalence with this guy. This guy is going for emperor and definitely has shown blacks and browns, yeah, Kanye and his chick got a couple of people out, and good for them, God bless them, but this man has shown what he thinks about us. With police shootings we’re the anarchist. He tried to bring us up on sedition, him and his Attorney General. If you say “Black lives matter” we’re trying to overthrow the government now. That’s what they’re trying to do. A lot of people are misinformed and they repeat these ignorant things that the zeitgeist says.

Again, false equivalence. I get it. Not my favorite. I would have preferred somebody else run. If I had it my way Malcolm X would be alive and he would be president. But shit, I don’t have it my way. To cut off your nose to spite your face is the most counterproductive thing to do. Ruth Bader Ginsburg died, he may get three people in the Supreme Court, swing this shit and become emperor because motherfuckers said, “Hillary is just as bad as Trump.” No, she wasn’t. We may have lost already because of people’s idiocy and false equivalency.

TRHH: I would hate to go through this shit for four more years.

Ras Kass: If he gets more four more years there’s not going to be four more years, I’m telling you. I’m not a stupid a person and I don’t yell “fire!” when there’s not fire. You can look at the system and we are in a very pivotal situation. Dude has pulled everything apart. He has the military, he changed the norms. He’s pardoning his homies. Usually they will wait to the last day. That’s what George W. Bush, Clinton, and whoever did. They’re all shady and grimy. This nigga came off the bat like, “That’s the homie. Fuck it. Let him go.” This is a whole different machine.

TRHH: Did you see he plans to sign an executive order to make the love of America taught in schools and shit? It’s some fascist, Nazi shit. I expect the redneck motherfuckers to love that shit, but I’m so surprised that black people are calling Joe Biden a racist and Kamala Harris a cop. I get it, I don’t love them either, but what’s the fucking alternative?

Ras Kass: False equivalence, brother. Somebody gave the narrative of if you would like somebody to say fuck you and bump you with their car, or do 70 miles an hour, run you over, stop, back up, call you a nigger, roll over you again, and then keep going. I mean, these people keep trying to compare murder to the hit-and-run.

TRHH: Who is the I’m Not Clearing Shxt album made for?

Ras Kass: I made it for the emcee. I really made it for all our peers. Think about Hip Hop Hooray, My Philosophy, The World is Yours, You Gots to Chill, Paid in Full, pretty much 99% of every song that’s in the category of greatness in our foundation is sampled. And highly recognizable samples! Even the ones that weren’t highly recognizable like Das Efx –They Want Efx – James Brown. That’s our foundation. The reason why Hip-Hop was created was because they disenfranchised the inner-city. They got rid of music programs in New York in the early 70s. With no instruments the turntable became the instrument and Kool Herc’s sister bought him turntables. She’s the unsung hero. His older sister bought him turntables and he was able to take two records of the same break and play them back to back and get it to loop. The loop invented the emcee. Hip-Hop culture was made from these samples.

So, I made it for the Hip-Hop DJ, for the Hip-Hop show attender, I made it for the producer, I made it for the rapper, I made it for the culture. Nigga, this is the pure backbone of the sky is the limit. People were using jazz, rock ‘n’ roll, and current shit. They were just taking it and what made it Hip-Hop was adding your own drums to it, putting your bars on it, adding a different bass line, or taking a different bass line from a jazz record and adding a break beat from the funk era. That’s the Hip-Hop of it and I just wanted to make it for people that enjoy that. Right now, we have this uniform version, that they’re trying to push as the only acceptable music, which is trap. There’s nothing wrong with that production style, but it’s only one production style. Without samples you limit. I just wanted to make it for the culture and return it to the sky is the limit, I’m not on a major label, I’m not trying to put it on iTunes, but I still think the sample is dope and why shouldn’t I invest in burning this fucking sample down? I only wanted to kill the sample.