Devine Carama: Worshiping in the Wilderness 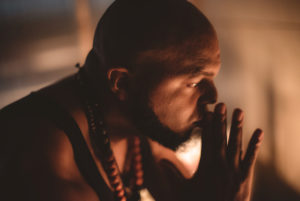 Devine Carama is an emcee that is unapologetic about his hardships, his struggles, and his faith. The Christian emcee has previously released a gospel Hip-Hop album called, “The Good News.” Carama’s latest album is also spiritual, but finds the Kentuckian grieving the losses of his father and teenage daughter. “Worshiping in the Wilderness” is an album about the human struggle. Devine Carama courageously filled Worshiping in the Wilderness with songs of doubt, strength, and hope.

In one of the most emotional interviews that I’ve ever conducted Devine Carama discusses how he has coped with life after the loss of his dad and daughter.

TRHH: What’s the meaning behind the title of the album, Worshiping in the Wilderness?

Devine Carama: For me, when you talk about the wilderness, even the biblical description of it, it’s a rough dark place. Nothing is growing, the aesthetics are deplorable, it just represents a bad place in my life. That’s the best way that I can characterize wilderness into what the concept of what the album is. I’m in the wilderness of my life – probably the roughest point, with the COVID stuff, losing my daughter, and all of that. As a person of faith, I’m still giving the glory to God and maintaining hope, even though I’m in the wilderness. But, that can be hard so, the concept of the album is navigating the trials and tribulations. Personal pain, the pain in the country, and still trying to maintain hope and navigate through all of that. I feel like whatever your faith is anybody can be strong when everything is going good, but can you worship through the rough times? That’s kind of the concept of how I came up with the title.

TRHH: Did losing your father and your daughter within close proximity of each other shake your faith at all?

TRHH: How have you been able to cope dealing with such personal hardships?

Devine Carama: Obviously, first and foremost is my faith. It might have been my mom who told me, “Whatever God needed her for up there must have been really, really important.” So, I think just from day one leaning on my faith, even when I didn’t understand, I know that God is perfect, everything happens for a reason, even if I didn’t understand it. It was that, but also, I’m a human being. Even though I’m trying to lean on my faith there is a lot of questions and holes that at the time my faith wasn’t filling. I think being able to go to the music gave me an outlet and a place to navigate how I was feeling. And my family – my wife and my girls. I’m still coping. Some days I wake up and I’m good. Today was a good day, but some days I physically can’t even move because I’m so depressed. It’s a process, but I think it was just my faith, music, and family that I was able to lean on to cope.

TRHH: Has being the father put you in a position where you have to be extra-strong for your other girls?

Devine Carama: Yeah. Yeah, no doubt. You know this as a black man – already there is so much on your shoulders just being that pillar of strength, whether it’s your community, your family, or whatever. That pressure was already there – just the everyday stuff. But like you said, having to be strong for my mom who just lost her husband, her house, and both of her sons are not in the house. Also, being strong for baby girl and her sister who is the same age, and everybody else. It impedes your process to cope all the way because you also have to be strong for everybody else.

TRHH: Thank you. I’ve never fully grieved. I don’t know how to. It changes. It feels different. It’s nothing like losing a child, but the grieving process in general is what I’m trying to get to. It’s important to grieve because at some point I started having anxiety attacks. I didn’t know what they were. I thought I was dying. My heart would beat really fast and I would get dizzy. I thought, “Okay, this is what it feels like when you die. I’m about to die.” I went to the doctor and he said, “No, that’s anxiety.” I wasn’t grieving properly. There is no handbook for it, well, there probably is… [laughs].

Devine Carama: [Laughs] We don’t get it coming up.

TRHH: Right! We don’t get it. I think it’s important and I can’t tell you how because I don’t know how to myself, but it’s important to allow yourself to grieve. I think by doing that you’ll be stronger for everybody and yourself.

Devine Carama: Right. You’re 100% right. That is something that I have been trying to find ways to do. Like you said, whether it’s culturally or just being a man, that’s something that you’re not taught to do. If anything, it’s almost the opposite in a weird way. Stop crying, be tough, be strong. When something like that happens and its never happened to you before, you literally don’t know how to at all. I think I try to find pockets. I was talking to my wife and sometimes I just have to go on a walk. I have to put the headphones in and go and have my cry then. Or I just need to take a ride. I’m still trying to figure out ways and spaces where I can just do that.

There was a protest here in Versailles, Kentucky and I had been on the front lines of the protests in Lexington. They wanted me to speak but emotionally I didn’t want to be that guy. I didn’t want to be the activist or the artist, I just wanted to feel. I just wanted to be there and let my emotions out without any responsibility. I’m being selfish in making sure I’m taking those moments for myself, because like you said it’s no manual. I’m trying. Maybe I’m not having all-out anxiety attacks like you said, but I feel it creeping up. If I don’t let this out and start finding spaces I’m about to lose it. I think I’ve had moments where I almost had one. I get it, man.

TRHH: I’m not that versed in the bible, but it reminds me of the story of Job. Was it Job?

TRHH: He was tried and his faith never wavered. We don’t really comprehend it and it doesn’t really make sense to a lot of folks, but God tries his closest people. The people closest to God will always unfortunately go through it more.

Devine Carama: Yeah. It’s the old adage, even in scripture, “To much is given, much is required.” That’s kind of how I look at it. I think it was my pastor’s wife who was telling my wife that, “Devine probably needs to talk to somebody.” In the last three years I left one job to go to another job that I thought was my dream job, only to get laid off in two months. I went through a divorce with my first wife. I had to start over and be a single father with my daughter. My dad passed, then my daughter passed. All of these different adjustments were in a three-year time span. People kept mentioning Job and I finally went and truly read it. That’s kind of how I feel at times because even though his faith never wavered Job was like, “Yo, what’s going on?”

Even though my faith never wavered, I’ve had moments of anger, confusion, sadness, pain, depression. But every situation has not only prepared me for the next tough situation, which is inevitable – that’s a part of life, but I probably wouldn’t have been able to handle everything that went on in the last couple of months had I not went through what I went through last year and the year before. Then also, you become a beacon of light for other people that are going through tough situations. People hit me up like, “Yo, I didn’t even think I wanted to be alive anymore, but seeing you work through the things you’ve worked through has inspired me to do that.” To me that’s showing that even when things don’t make sense to us there’s still perfection in it. Just trying to find meaning and purpose in everything, good or bad, I think that’s part of our faith and job as a Christian. I even make a reference to David in “Where the Wild Things Pray.” At one point he was in the wilderness worshiping. You look at Moses leading people through the wilderness. You gotta go through that sometimes to get to that other side to find that glory.

TRHH: What did Jesus say on the cross? “My God, my God, why hast thou forsaken me?” He even had moments of not understanding and doubt.

Devine Carama: I think it’s a difference. Sometimes it can be the same, but there are sometimes where I’m not content like happy, but I’m content with knowing that I’m not going to understand everything. Sometimes the lack of understanding can breed doubt, but with my faith there is a contentment in knowing that I’m not going to understand everything, but maintain my faith. That can be hard to comprehend, but that’s just where I’m at with it even to this day. I may die never fully understanding why my daughter left this earth at 18-years old. It’s that faith that keeps me yearning for that understanding eventually. That might just be in finding purpose. It’s a journey. A lot of people think to be faithful is to know it all and understand everything and that’s not the case. If anything, it’s the fact that you don’t know what’s on the other side. It’s the fact that you don’t understand everything and you still believe. That literally is the definition of faith.

TRHH: I want to circle back to the woman saying you might need to talk to somebody. I would highly recommend it. I’ve been going to therapy for a long time and it helps. Also, circling back to our community not having a manual for grief in relation to how we process emotions. My therapist told me once that men, probably black men more so, aren’t comfortable showing emotion unless we’re fightin’ or fuckin’ [laughs].

TRHH: Yeah. That’s the only time that we’re okay with emotion. It blew my mind. It’s like you said, we tell little boys, “Stop crying! What you crying for?” We socialize little boys from a young age to not show emotion and it messes us up in the end. So, it’s important to feel what you feel and be okay with it. Especially for our community, we lose a lot of people over perceived disrespect in the hood. What that really is, is not knowing how to handle that emotion. You’re just upset, you don’t have to kill this guy. We gotta get a handle on that. It’s okay to say, “Hey, that pissed me off,” and keep it moving.

Devine Carama: It doesn’t have to be a dire situation.

TRHH: It does not. I think therapy helped with cracking that open. It’s helped me to see that, because I didn’t know that for 30-something years.

Part 2 of Devine Carama – Worshiping in the Wilderness

Sherron Shabazz is a freelance writer with an intense passion for Hip-Hop culture. Sherron is your quintessential Hip-Hop snob, seeking to advance the future of the culture while fondly remembering its past.
View all posts by Sherron Shabazz →
This entry was posted in interview and tagged Come Together, Devine Carama, interview, I’m a Dinosaur, JK-47, Johnny 5, Kentucky, KY, Lexington, When Death Comes, Where the Wild Things Pray, Worshiping in the Wilderness. Bookmark the permalink.