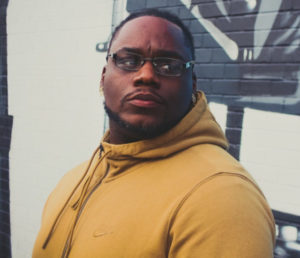 Buffalo, New York producer/emcee Therealskitso teamed up with Canadian producer Frank Grimes at the start of 2019 for a project titled“The Experiment.” The result was a grimy, sample-based release filled with tales from the streets. The duo reconvened most recently to create a sequel called, “The Experiment 2.”

The Experiment 2 features production by Frank Grimes and Therealskitso himself. The 7-track EP features appearances by John Jacob and ToneyBoi.

Therealskitso spoke to The Real Hip-Hop about how he releases pain with his pen, what it’s like working with producer Frank Grimes, and their new EP, The Experiment 2.

TRHH: How would you compare The Experiment 2 to the first one?

TRHH: Mixing it up; is that the meaning behind the title of The Experiment?

TRHH: Being a producer yourself, was it difficult for you to share production duties with Frank Grimes?

Therealskitso: Nah, man. Actually nah. I kinda like it going off other people’s beats and shit. He’s the first producer that I really did that with. It’s kinda cool.

TRHH: You flipped the Esther Phillips sample that Q-Tip most famously used for Mobb Deep’s Give up the Goods for your song “Tryna Shyne.” What made you decide to put your own spin on that loop?

Therealskitso: I just love that sample so much, man. I know you’re familiar with Jeru the Damaja – Whatever by DJ Premier?

Therealskitso: That’s one of my favorite records and shit. I’m like, “You know what? Let me see if I can spin this record one more time” and I came out with Tryna Shyne.”

TRHH: On the song “Pain” you spit non-stop without a chorus and touch on a lot of different things. What inspired you to write that song?

Therealskitso: Just life, man. One day I was sitting back making beats and I came up with that loop. I’m like, “Let me put some of this pain that I’m feeling on the paper and shit.” At the time I had lost a couple of friends and shit. That’s what made me really come up with the record – the pain and how I was feeling at that moment and shit.

TRHH: Is making music therapeutic for you?

Therealskitso: Yeah. Yeah, man [laughs]. Very. When I’m feeling some type of way I just go to the beat machine, come up with some beats and some lyrics, and get to work.

Therealskitso: I just use Fruity Loops Studio, man. I don’t even got no drum machine. I got a little MIDI controller. It ain’t a drum machine but it look like one. That’s all I use.

Therealskitso: Well it was “Skitso” originally. Some dude from L.A. got the name Skitso too. His lawyer sent me some shit in the mail about the name and shit. I guess he supposedly had the name first, so I had to switch up to “Therealskitso.”

TRHH: What’s your favorite joint on The Experiment 2?

Therealskitso: Man, I like all of them. I don’t really have a favorite joint. I bang out to all them joints. I’m going to be completely honest with you, all them joints my favorite.

Therealskitso: I got a lil’ EP coming out in late August called “Born Alone, Die Alone.” That’s my solo EP and shit. I got Project Pat on there, Ray Vandetta, and I’m working on a couple more features, too. By late August that’ll be out.

Sherron Shabazz is a freelance writer with an intense passion for Hip-Hop culture. Sherron is your quintessential Hip-Hop snob, seeking to advance the future of the culture while fondly remembering its past.
View all posts by Sherron Shabazz →
This entry was posted in interview and tagged Buffalo, Canada, Frank Grimes, Frank Grimes & Therealskitso, interview, Montreal, New York, NY, Pain, producer, Quebec, The Experiment, The Experiment 2, Therealskitso, Tryna Shyne. Bookmark the permalink.