Dirt Platoon: Get Ya Handz Dirty 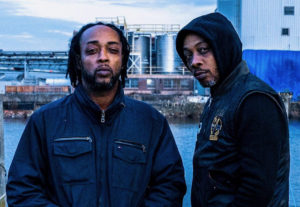 Raf Almighty and Snook Da Crook are Dirt Platoon. Veterans in Hip-Hop, the biological brothers from Baltimore released their last group effort, Bare Face Robbery, in 2015. The energetic duo kicked off the New Year in a new way with a new album called “Get Ya Handz Dirty”.

Get Ya Handz Dirty is a 10-track album that features appearances by Ruste Juxx, Guilty Simpson, O.C., and Fel Sweetenberg. Sweetenberg also provides production on the album along with Naplam, DJ Brans, and Abyss Dwella.

The Real Hip-Hop spoke to one-half of Dirt Platoon, Raf Almighty, about working with legendary lyricist, O.C., his group being compared to other high energy duos in Hip-Hop, and their new album, Get Ya Handz Dirty.

TRHH: Why’d you call the new album Get Ya Handz Dirty?

TRHH: How would you compare this album to your last full-length album, Bare Face Robbery?

Raf Almighty: Bare Face Robbery we had maybe 4 producers. This album, we locked in with Fel Sweetenberg, so, we kind of molded the album from those first five or six songs and then when we incorporated Brans we knew that we had something that was grown up. If I was to say how it’s different from Bare Face Robbery to now, It’s a grown up Hip-Hop album, but raw. We didn’t leave any of the rawness out, bro.

TRHH: You sample O.C. on one song on the album and he’s also featured on the song “Black Sharpie.” How did the collaboration with O.C. come about?

Raf Almighty: O.C. dropped an album a few years ago and he made a reference to Baltimore and Dirt Platoon in a song. He reached out to us on IG, told us he was a fan of our music, and that he made that reference to us. He wanted to make sure that it was okay and we told him “Sure, we’ve been big fans since we were kids and how ‘bout giving us a go ‘round since you fuck with our music and let’s spar on a track?” He said, “No doubt.”

TRHH: There’s another collab on the album with Ruste Juxx called “Jumping Over Cars” where Ruste says some controversial things about the Amber Guyger case. What was your reaction when you heard Ruste’s verse?

Raf Almighty: We was 2000% with him. When we link up with a producer or emcee and collab we never try to limit their creativity. So, whatever they wanna say, whatever they wanna do, as long as it’s raw Hip-Hop and matches with us, we’ll let you do what you wanna do. We’re very up-front brothers anyway. If he wanted to speak on something that touched his heart I wouldn’t tell him not to, so, we agreed with him 1000%.

Raf Almighty: I look at Hip-Hop and anything that has to do with other genres of music like soul and R&B and I know that it comes from old gospel. Any time that I’m recording an album or me and Snook are getting into album mode, I throw on some jazz, some 80s Hip-Hop, or I’m listening to some gospel. It’s a very prominent preacher from Baltimore who was a civil rights leader and held down the community for years and years and his name is Rev. Reid. I wanted to give him a nod, salute Rev. Reid, but also add my soul and my gospel to the music. If you listen to any of Dirt Platoon’s albums I always try to add a soulful or gospel theme to it. Brans hit me with the beat and it touched my soul, so, I decided to bring that out. Sometimes I look at Hip-Hop as we’re cleansing people’s souls too. We might be going through something and we write something down and record a song, not knowing that the listener is going through the same thing and it cleanses their soul because they know they’re not the only ones going through it. That’s what gospel does for people. That’s why I like to incorporate it into anything that Dirt Platoon is on.

TRHH: Have you encountered any fans who told you that your music touched them in a certain way?

Raf Almighty: All the time. Since Dirt Platoon started in the late 90s they’ve been telling us, “I was feeling that” or “My dad wasn’t around” or “We come from the hood” and “My mom was the only one that raised us.” We talk our heart and we talk our real life. Nothing fake or phony. I guess people can relate to that. That’s why they been fucking with Dirt Platoon for so long.

TRHH: When I listen to you guys the high energy reminds me of Onyx or M.O.P. Do you get those comparisons at all?

Raf Almighty: All the time. I’m glad you said that because sometimes people say, “No disrespect, but y’all remind me of M.O.P.” I try to tell them that “Why would we be disrespected when you’re comparing us to one of the top two duos in the world?” We get that comparison because of the high energy and the stage performance is raw. Me and my brother kind of utilize the music to scream and get our anger out, so they don’t have any other people to put us up against but M.O.P. or Onyx. We get all of those raw 90s comparisons and we accept it and love it. We bang with M.O.P. and Onyx. We run into those brothers and they tell us that they’re feeling our music that makes us feel great.

TRHH: Do you have a favorite song on Get Ya Handz Dirty?

Raf Almighty: Right now, my favorite song would be “Best CDs.” I’m sure tomorrow it might change. I’m fucking with the Peace of War joint. Every day my shit kind of changes up.

Raf Almighty: Right after this album we’re going to bang out with Snook’s first solo. That’s called “The Thieves Code.” Right after Thieves Code we might smack y’all with another Dirt Platoon album, and then I’ll drop my third solo album.

Sherron Shabazz is a freelance writer with an intense passion for Hip-Hop culture. Sherron is your quintessential Hip-Hop snob, seeking to advance the future of the culture while fondly remembering its past.
View all posts by Sherron Shabazz →
This entry was posted in interview and tagged Baltimore, Black Sharpie, Dirt Platoon, Dirty Pots, Get Ya Handz Dirty, interview, Jumping Over Cars, Maryland, Raf Almighty, Rev. Reid, Snook Da Crook. Bookmark the permalink.