DreamTek: The Wizard of Oddz 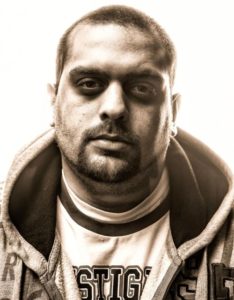 DreamTek is a producer, emcee, and owner of Seven Oddities Records. The Chicago native has been a staple in the underground scene for nearly two decades. Dream recently released his second full-length solo album on his Seven Oddities labels titled, “The Wizard of Oddz.”

The Wizard of Oddz is produced entirely by DreamTek and features appearances by DJ PhilLogic, Clever One, Roy Hobes, DoomsDay, Tony Patagonia, Arken Nino, and PozLyrix.

The Real Hip-Hop spoke to DreamTek about his Seven Oddities record label, the lack of originality in Chicago Hip-Hop, and his new album, The Wizard of Oddz.

TRHH: Why did you call the new album ‘The Wizard of Oddz’?

DreamTek: Actually, I run Seven Oddities Records. There are 9-10 artists under it. I produce for all them artists. I record, mix, and master for all them artists. I do videos for them, I run the website, I’m basically the dude behind the curtain running shit over there. That’s comparable to the man behind the curtain running shit in the Wizard of Oz. We go by “7 Oddz” for short. I found out that there was a mafia cat back in the day called The Wizard of Odds. His name was Donald Angelini. I thought that was kind of cool that that accidentally happened like that. I didn’t want the album to be about the movie. I just kind of wanted to take it for what it was and apply it to myself.

TRHH: What’s the origin of the Seven Oddities name?

DreamTek: I grew up in Uptown. We did graffiti and we had a crew called 7 Crew. That formed into what was the early label in 2000. We came up with the name based off the number 7. The number 7 was always dope to us. Supposedly it’s a magical number, a spiritual number, a religious number, it’s just everywhere. We added that in there and the oddities came from the fact that everybody that was originally down, and to this day, everyone has their own style. It’s like a circus of sorts – a side show. It’s all this crazy shit going on but when we all come together we form and execute properly so it’s dope. Everybody’s got their own style and that’s where the oddities came from. Usually when you have a group of heads normally they all sound the same, they kind of go together, but it’s different over here. Everyone has their own sound and style and shit, it’s real dope.

TRHH: On the songs ‘Nobody’ and ‘Puppetry’ you take shots at some rappers in Chicago. Why was it important for you to express that sentiment on those songs?

DreamTek: Man, I feel like no one really does. There’s a couple heads that have in the city here and there, but I feel like no one’s really directly been like, “Yo, what the fuck is going on?” The Puppetry joint, is basically how it is – it’s a factory almost. Being in Chicago you can go up to Sub-T on any given Tuesday or Friday and you got 100 emcees out there and they’re all the same. Certain cats stick out here and there but you got this almost carbon copy emcee/rapper thing going on. Then you got the young heads that see the money. They wanna blow up so they all copy each other. They wear the same clown outfits but no one is directly going at them. I’ve always been that way. I’ve been against anything that was bad for Hip-Hop in my opinion. I’ve always been vocal about it and throwing it in my rhymes. I’m forever talking shit [laughs]. I feel it was necessary, especially with Puppetry, to make a joint that specifically that’s all it was about. I want some younger heads to hear that, actually. Hopefully I can get that around a little more.

TRHH: On this album you did things differently and had features on it. Why’d you switch it up for The Wizard of Oddz?

DreamTek: My previous album was just all me – produced by me, scratches, all that. I wanted to include some of the label on it. I didn’t put everybody on there – I didn’t want to flood it. I wanted to do more than just straight solo joints on this one. It was actually requested by a lot of fans. They were like, “What’s up with the features,” and “Are you gonna have anybody on this one?” just mad questions. I wanted to go that route as opposed to being all Dream. That Tek the Terrible album that I did a few years back is strictly me, which is dope. I definitely wanted it to be that purposely. I remember arguing with the fam because cats were trying to sneak on it. I’m like, “Nah,” I wanted it all me [laughs]. With this new one I wanted to showcase cats from the label on it while I’m showcasing myself because I feel they’re dope too.

TRHH: You produced everything on your last two albums; what does your workstation consist of?

DreamTek: Currently I have two of them. I have an MPC Studio at the studio and I have a smaller beat-making studio at my house where I have another MPC Studio. In the past I’ve had every MPC. I’ve always been an MPC head. I had the 2000, the 60, the 2500, the small joint – the 500. It’s just real comfortable for me. I feel like the new MP’s like the one I got and the Renaissance, I feel like they finally got it right where they mixed it with the software end of it where it’s actually functional. I don’t even have to look at the screen when I’m making beats. I can just use it like a regular MP and it does its thing. That’s what I use primarily. As far as recording and mixing and all that I use Studio One – that’s my DAW.

TRHH: The song ‘Autobiography’ was real personal. Was it difficult for you to share that part of yourself with everyone?

DreamTek: Yeah. Man, it really was, man. A little known fact about that joint, I wrote the first two verses and the hook when I was 16 or 17. I never finished the joint. I loved it but I was always cautious about putting it out because I didn’t want people to know about me like that. I never finished the joint and wrote the third verse because I didn’t feel like I lived life enough to sum it up. I had that track forever, man. If you listen to the song you obviously know I grew up kind of crazy. Where I’m at now I’m getting married, I got the label, I got my own business going, I got a house, my sisters are going to college, everything is upside down for the better. I’m about to be 33 this year and it took me that long in life to write that third verse. I didn’t have enough life yet to wrap it up but I feel like I did at this point. It was definitely hard to decide to put it on there, but I’m glad I did, man. I let my mom hear it before and she gave me the OK on it [laughs]. I do want heads to know where I come from. I feel like that’s important.

TRHH: What qualities are you looking for in an artist for the Seven Oddities label?

DreamTek: I’ll use my homies PozLyrix and Scenic Roots as an example. When I met these heads they were doing shows and that’s where we met ‘em. We ended up doing the same show together, I forget the venue. I’d never heard these fools before. When I did hear them it was reminiscent of 90s style spittin’. They were spittin’ over these horrible beats, in my opinion, I ain’t trying to bash nobody. They were synthed out, almost like Cash Money’s early style [laughs]. The stuff they were spitting over it was raw and I thought they needed a home and the right beats. I cuffed them up based off of just hearing that and it turned out beautiful. Personally I look for originality. That’s really important to me and that’s one of the ways where we ended up having our own styles over here. Cadence is real important and the way they spit. I gotta believe what they’re saying. Just overall content, man. I know you know when you hear a dope emcee. Especially us cats that grew up listening to the older stuff – we know what a dope emcee sounds like. That’s really what I’m looking for is that essence at the end of the day.

TRHH: Who is The Wizard of Oddz made for?

DreamTek: Man, to me, anybody that wants that raw Hip-Hop. That’s really what it is, just straight, raw, uncut, Hip-Hop. I feel like there’s something on there for everybody for the most part. There’s some harder joints, there some more lowkey joints. I feel like it’s for any cat out there trying to nod their head, blaze one, and just sit back and listen to something. I feel like they’ll enjoy it – hopefully.

Purchase: DreamTek – The Wizard of Oddz

Sherron Shabazz is a freelance writer with an intense passion for Hip-Hop culture. Sherron is your quintessential Hip-Hop snob, seeking to advance the future of the culture while fondly remembering its past.
View all posts by Sherron Shabazz →
This entry was posted in interview and tagged Autobiography, Chicago, DreamTek, Illinois, interview, Nobody, Puppetry, Seven Oddities Records, The Wizard of Oddz. Bookmark the permalink.