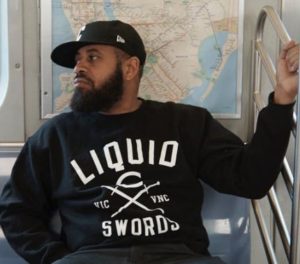 Mr. Complex has had an extensive career in Hip-Hop. Dating back to the mid-90s the Queens, New York emcee has released music as a member of Polyrhythm Addicts and as a solo artist. His catalogue is comparable to his name, and his latest release “Forever New” is no different.

Mr. Complex chatted with The Real Hip-Hop about inequalities on the underground scene, his foray into film, and his new album, Forever New.

TRHH: Why did you call the new album ‘Forever New’?

Mr. Complex: Because my stuff is pretty much timeless – that’s the easy answer. I’ve been recording it for a long time. I didn’t care when it came out, it was always going to be forever new. I’m an underground independent artist and people find my music that I released twenty years ago and they think it’s new. Somebody hit me the other day like, “I’m in Jamaica. My radio station is playing your song called ‘Visualize.’ It’s dope. I put it in my top ten list.” Visualize came out twenty years ago. That’s where I’m at, everything is forever new.

TRHH: How long did it take you to do Forever New?

Mr. Complex: This album I’ve been recording for like eight years. I had started recording in 08-09. My first producer that I started doing my demos with in the late 80s/early 90s, we sort of separated. He started managing and sort of pulled me into the R&B world. He was running with CeCe Peniston and people like that. I left and started doing my own thing. I ran into him in the late 90s and he congratulated me on the work that I’d been doing. He got cancer and in 08 Pharoahe called me and was like, “You gotta call Dre, he’s about to die.” I went to the hospital to visit him and I ran into a couple of other homies from high school that started in the game with me. They had separated and went into the work force.

They were never into the music like we were. One of them retired early from being a corrections officer. He built a studio in his basement and just got nice with the beats. After the funeral I started recording. This is Mortal 1 I’m talking about. Mortal 1 learned from my man Andre Kyles, Omega Supreme. I started recording again and in light of all that I said, let’s do this for Dre. It’s been slow because he’s never been a music go so he doesn’t really care. He’d rather put new flooring down in the kids’ room and stuff like that. It’s taken a long time, plus he moved down to Atlanta, which made it more difficult. I’m just taking my time. I’ve still been working in the film world and still doing music when I can.

TRHH: I watched the video for ‘Time and a Place’ and the scenery was beautiful. Where was that filmed?

Mr. Complex: I shot that in Hawaii. Did you see the ‘Then Was Then’ video?

TRHH: Was that the old school one?

TRHH: I saw that. I liked it. How is this album different from Swiss Chocolate Cake?

Mr. Complex: Swiss Chocolate Cake was an album I recorded in Switzerland, pretty much with only one producer. I recorded that one in 03-04 and again I sat on that for like eight years and just released it. That one was a different vibe. I really recorded the Swiss Chocolate Cake album in seven days total. This one here because I was able to take my time and work with one producer I was able to go through some beats, some concepts, and some emotions. I got the wordplay, I got some relationship songs because when you’re older you start dealing with marriage, kids, divorce, and life. I was able to put some of that in some of these songs. I have a little more conscious records like ‘Stormy Weather’ and ‘Gotta Get Home,’ And then I was still playing with having fun with Hip-Hop like ‘So Sad’ and ‘Then Was Then’ and a few other joints.

TRHH: Speaking of ‘So Sad’ on that song you talk about the lack of emcees on the scene right now. Why was it important for you to write that song?

Mr. Complex: When they cover the underground they always mention the same five artists. They say, “What kind of rap do you do?” and you say underground and they be like, “Who? Talib Kweli? Mos Def? Common? Pharoahe?” It’s the same five people mentioned all the time. When you’re in this world you know. I can name about 100 of them. It’s just so many that don’t get counted. I don’t get mentioned. It’s just the same people and it’s kind of upsetting. Not to disrespect anybody, everybody deserves it for the work they put in, but y’all could run to a few other emcees like J-Live, Shabaam, I could go on with the list. It’s the same five that they pick to be the representatives of this underground scene. I’m not even talking about commercial-wise. The people that they’re eyeing are still doing it, but there’s still artists out there making good music that are able to do it but they just don’t get mentioned.

TRHH: Why do you think that is?

Mr. Complex: Because people don’t really dig that much. When I mention that top 5 they pretty much are underground but a lot of them have had some sort of major push at some point in time that got them in the light. Rawkus put a lot of money behind Mos and Talib. Common had a bigger deal and Pharoahe had a bigger deal. These people were the best in that clique so they just stand out. It’s easy to remember them. People like Shabaam and J-Live, regardless of how many shows and tours that they put on they still won’t get that type of big play. It’s not like magically a hit happens. It does happen for certain cats and then they cross over to a major market. You gotta hit the lottery.

It’s a marketing game really to get these artists known. To make a song like ‘King Kong Love’ that everybody agrees is a good song, but I didn’t have the machine or no one helping me promote it so it could get to the people like it could have or should have. That song could have crossed over. The response that I’m getting from it is different from any other record that I put out. I never had anyone steal my song, put it on YouTube, and put their name on it saying, “featuring Mr. Complex.” I’m like, “Who the fuck is this dude?” but that happened with that record.

TRHH: Is ‘Lesbo Flow’ based on a true story?

Mr. Complex: Yeah, half of it is true. I’m a writer so I can write about pretty much anything, but I do like to take from my own life. At one point in time I was living in Bed-Stuy and I had these two neighbors who used to walk their dogs all the time. Every time I looked at the pretty one the thugged out one always gave me the ice grill, the stare down, and the mean mug. One day I did catch the girl in the store and I was like, “How you doing?” We had a nice little convo and I could see the other one looking through the window like, “You talking to my girl?!?!” That’s as far as it went and my fantasy finished up the story [laughs].

TRHH: Can you offer some insight into the ‘She Should be on the Radio’ film you’re directing?

Mr. Complex: That one I’ve been shooting it for five years. I put it on hold because I had to finish this album. When I get a minute again I’m jumping back into the film. What I need to do is find another editor. The editor that I had edited that Stretch & Bobbito movie. He got a Netflix job so now I have to find somebody else. I just have to raise some money for that to get the post done. It’s an incredible film so far. I shot over 50 different female artists from Jaguar Wright, to Res, to Yahzarah, to Kim Hill.

There are so many artists that you may not have heard of but they have a following, they have Grammys, they might have sang on some hit records you didn’t realize, or they might have been part of some big Hip-Hop groups. Kim Hill was the original singer in The Black Eyed Peas. She left to follow her solo career and got replaced by Fergie and then they blew up. So many stories are in this film and there’s so many things that these women go through dealing with this male-dominated industry. There are some crazy stories, man, but it’s coming out pretty good.

TRHH: What do you hope to achieve with Forever New?

Mr. Complex: I had a show in Pittsburgh and that was my first show outside of New York State since I dropped this album. I haven’t been able to jump out of town in a minute and I miss that. I get there and people remember from like 20 years ago. This one cat named Blitz has a big barbecue restaurant and he treated me and my people. He had big bags of barbecued ribs, chicken, greens, and macaroni. You get to the venue and people are telling you all these things about when my first record came out. It’s like I made all these, not just fans, but a little bit more when they connect with you in a certain way. I don’t really care about the money because it seems like Hip-Hop doesn’t really make the money it could or should. It’s always a chance you can get a check here or there – I got one song in a movie already. But my biggest goal is to get back overseas and tour.

I just want to get back to places that I used to go to and people remember my name. They’re like, “Complex, how’s it going with this,” and that’s all I really have besides all these records. I have one gold record. The biggest goal is just to get around. The reaction I’m getting from people on this album is insane right now. I just got 1000 followers within a week and a half on Instagram. The response every day, multiple people are saying something crazy good about the quality of this album. I’m just curious about what’s going to happen. I’m trying to make something big that’s going to inspire people my age that’s still doing the music. Some of them can’t. Some of them gave up and have to stick to their job. It’s very difficult. I’m able to survive because I do the film stuff and that’s flexible hours as well. Some people can’t leave their jobs to do what I’m doing. I understand that and respect that. I’m just doing this because I still love this.

Sherron Shabazz is a freelance writer with an intense passion for Hip-Hop culture. Sherron is your quintessential Hip-Hop snob, seeking to advance the future of the culture while fondly remembering its past.
View all posts by Sherron Shabazz →
This entry was posted in interview and tagged Core Records, Forever New, interview, Mortal 1, Mr. Complex, New York, Polyrhythm Addicts, Queens, So Sad, Swiss Chocolate Cake, Then Was Then, Time and a Place. Bookmark the permalink.