Posted on September 30, 2019 by Sherron Shabazz 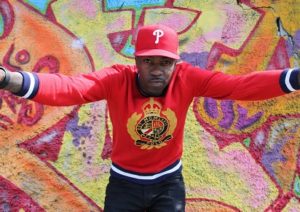 After releasing a string of mixtapes and flirting with different sounds, Eddie Kaine has finally found his niche. The Brooklyn, New York emcee is now full entrenched in the sound made famous by his hometown – hardcore gritty Hip-Hop. Kaine’s sound is manifested on his debut album, “Aruku” which means “to walk” in Japanese.

Eddie Kaine spoke to The Real Hip-Hop about his hoop dreams that were never fulfilled, who he believes are the best emcees from his borough of Brooklyn, and his new album, Aruku.

TRHH: What’s the meaning behind the title of the album, Aruku?

Eddie Kaine: I’m running with a collective called The Walkers. It’s a couple of artists doing what we gotta do in Brooklyn. I kind of feel like I didn’t want to call it “walk” but I wanted to somehow incorporate my team and the fact that I’m walking on every track. That’s our little saying for when we kill a beat. I wanted to incorporate that somehow in the title. I was looking up the word in different languages and came across “aruku” which means “walk” in Japanese. With that also came the idea of the anime cover. I don’t watch anime at all, but I thought we should use it since it’s big in Japan.

TRHH: How is Aruku different from your last project, 2K19?

Eddie Kaine: Ah man, it’s way different. 2K19 was much more of a bouncy flow. It had a different vibe to it. I’m dealing with more hardcore Hip-Hop producers, and this is really what I wanted to do from the jump. I’m from the streets and I like different music. I listen to all types of Hip-Hop music. I was partying to the trap music so that was my reason for doing the majority of the beats that sound similar to trap music. I also wanted to give them a gutter Hip-Hop twist, which is why I got Rim on “Overkill” and I did the “Mo Money, Mo Homicide remix” type joint. It’s different because Aruku is more of a Hip-Hop, gritty, hardcore, New York vibe. No trap, no bounce, none of that in it.

TRHH: The single “By Any Means” features Rome Streetz; how did that joint come together?

Eddie Kaine: I know Rome through Rim da Villain. Ever since I met Rome he was cool. We’ve always been cool. I’ve always rocked with his music. We told each other, “Someday we’re going to work,” so when it came to this project he was one of the first people that I had in my mind that I wanted to put a joint out with.

TRHH: What’s your opinion on what the emcees from Upstate New York are doing to bring the griminess back to the game?

Eddie Kaine: I respect it. I pay attention to everything – the Griselda and all of that. I love it. When I heard them and a couple of other artists around the same time I knew like, “Oh shit!” My old music, you can hear that I was still on my grimy, gritty, New York flow, but when you’re pursuing a career sometimes you try different things. I didn’t know people were still going crazy like that. I really respect their movement because they’ve got a big following. They’ve got a lot of people back on the grimy, gritty, Hip-Hop vibe just because it’s in them.

TRHH: Who is the greatest emcee to ever come out of Brooklyn?

Eddie Kaine: Biggie, man. Biggie of course. Biggie was way ahead of his time. People still live their lives based on B.I.G quotes today. If we want to throw a second person from Brooklyn in there, it’s Jay, but I say B.I.G.

TRHH: Give me your top 5 from Brooklyn.

Eddie Kaine: Of course, we’re going to go with Big Daddy Kane, Biggie Smalls, Jay-Z, Ol’ D.B… I’m trying to really think with this one. I’m trying to give you somebody that I grew up in Brooklyn looking up to.

TRHH: There’s a lot to choose from. You got MC Lyte, you got Sean Price…

Eddie Kaine: Yeah, of course. Can I say the whole Boot Camp Clik as a whole?

Eddie Kaine: I grew up all about basketball. I played in junior high school, numerous hood tournaments, and in high school. I had a situation where my coach, rest in peace Larry Major, I was supposed to get a safety transfer to play for another school. I wasn’t doing too well at the school that I was at. I was supposed to get a safety transfer and he was going to be the one to help me get it. He had a personal situation in his life and he ended up committing suicide. It really messed me up. My hopes were to start fresh at a new school. I stopped going to the school that I was at for about a year and when I came back it wasn’t the same. I played alternative basketball and went on college tours, but I was already caught up in the streets and shit, so that didn’t really work out. Now that I’m older I look back and say that was part of a mistake, but everything happens for a reason. I wouldn’t be doing this interview with you now if my life didn’t work out the way it did. That’s how it goes.

Eddie Kaine: That was given to me in the streets. I was probably about 9-years old. That was around the time when the Bloods were running heavy in Bed-Stuy, Brooklyn. It used to be a mob of guys on my corner every night. I was one of the young kids running up and down the block doing dumb shit. You always saw me somewhere on that block. My name was Eddie and one of the dudes on the block always called me Eddie Kaine. “What’s up Eddie Kaine?!” That was my name. People think that’s my real name sometimes.

TRHH: I thought you were a Five Heartbeats fan.

Eddie Kaine: Nah, not at all. I had the name before I saw the movie. I was about nine or ten years old. When I grew up and heard about the film and saw it, I was like, “Okay.” But that came from a dude in my hood.

TRHH: Do you have a favorite song on Aruku?

Eddie Kaine: I would probably say “Grew Fast” because I got brutally honest in that song. I talk about my father leaving me at the age of 17 and me asking my brother what a brick was. This stuff was real. I remember it vividly. I was probably 7 or 8 years old and I asked him what a brick of cocaine was. I was being brutally honest about everything in that song. That’s also why I made it the last song because it touches my family and friends. That’s definitely my favorite song on the album.

TRHH: Who is Aruku made for?

Sherron Shabazz is a freelance writer with an intense passion for Hip-Hop culture. Sherron is your quintessential Hip-Hop snob, seeking to advance the future of the culture while fondly remembering its past.
View all posts by Sherron Shabazz →
This entry was posted in interview and tagged 2K19, Aruku, Brooklyn, By Any Means, Eddie Kaine, Grew Fast, interview, New York, The Walkers. Bookmark the permalink.