Posted on September 23, 2019 by Sherron Shabazz 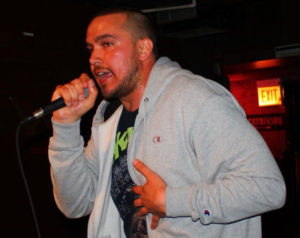 Ronesh is an emcee/producer originally from the Chicagoland area, but now residing in Oakland, California. His music combines classic boom bap with his own unique sounds, while drawing inspiration from every corner of the nation. Ronesh’s latest release is a 7-track EP titled, “Olive Branches.”

The Real Hip-Hop spoke to Ronesh about his decision to move from the Midwest to the Bay, why he speaks out against racism in his music, and his new EP, Olive Branches.

Ronesh: Traditionally olive branches are a symbol of outreach. On this project it was all pretty much me putting together songs and then reaching out to people who I thought would be dope to collaborate with on them. I had a line in the song “Knowledge of Self” where I said, “I’m selective with my olive branches,” and I thought that would be a cool phrase to title the album.

TRHH: On the song “Oh Say” you mention that your grandmother was an immigrant; where are your people from?

Ronesh: My dad is from India. He came to the states in the late 1960s – my grandparents as well. My mom’s people are from Michigan.

TRHH: You touch on America’s racism on Oh Say, what inspired you to write that song?

Ronesh: As we were touching on, my dad’s family is Indian and my mom’s family is what you would call white in this country – white Anglo-Saxon people from Michigan. I was fortunate enough in the household that I grew up in that there wasn’t any tolerance for overt racism and bigotry. In extended communities, both white spaces and Indian American/South Asian American spaces there’s just a lot of ignorance and anti-blackness. I wanted to address that kind of speaking to my own people — the first verse addressing my white side and the second verse addressing my Indian side. I tried to point out the hypocrisy and flawed way of thinking that a lot of people fall victim to.

TRHH: Why do you think there is that racist outlook on both sides?

Ronesh: That a big question, man. I guess you gotta look at history. It’s something that we’ve never really fully come to terms with as a nation. White America has never fully come to grips with the actual history of this country. You’ve still got people flying confederate flags and denying some of the basic things that they see with their own two eyes. As far as South Asian’s falling victim to that, it’s a product of the divide and conquer strategy. If you look at when Britain colonized Africa and South Asia they would try to convince these Indian people that they’re superior to the African’s. That way they’re not coming together and overthrowing their colonizers. That’s what I was trying to get at in that song. If you’re just a regular working person in this country, regardless of your ethnicity, you need to take a real look and see who your actual enemy is, and not the people you’re being told to fear.

TRHH: Are you originally from Chicago or from Michigan?

Ronesh: I’m from Des Plaines, Illinois. I don’t want to say Chicago because it’s not Chicago [laughs]. I like to come home and not have people check me on that.

TRHH: What led to you moving from Chicago to Oakland?

Ronesh: I got tired of the winters out there, man. I don’t really like the cold weather. I had some friends out here who said I could crash for a minute. It ended up with me getting out on my own two feet and I’ve been out there 11 years now.

Ronesh: It is. It was not like that when I moved here in 2008. It was still more expensive than getting a place in Chicago, but Oakland wasn’t insane like it is now. That changed around the year 2012 and all of a sudden rent started doubling and tripling.

TRHH: Has being on the west coast changed your musical style at all?

Ronesh: I think it definitely has. I’ve always been heavily influenced by west coast music. People like Dr. Dre, DJ Quik, and Battlecat were always some of my favorite producers when I was starting to make beats. Since I got out here I’ve become more aware of more west coast underground rap. I may have been more of a kid when it was really coming out, like early Freestyle Fellowship records and some Pharcyde records. Although, I do remember hearing Pharcyde in the Chi as a kid as well. Getting more familiar with experimental styles has been something that the west coast has influenced in me.

Ronesh: I played the piano and saxophone as a kid – not super great, but I wasn’t bad. I was starting to get really into rap music and Hip-Hop around 1995-96. My mom got me this little Casio keyboard for Christmas and a couple of years later we got a computer. I figured out how to download a couple of pirating programs, plug in that Casio, and make little beats. They were alright. Most of them weren’t too good. I didn’t really learn how to sample until a couple of years later, and that definitely changed the whole way that I approach making music. That’s when I started to understand how some of my favorite songs were actually being made.

TRHH: How much of your music is sampled?

Ronesh: Probably more than half. Two-thirds are probably sample based. I do make some sample-free stuff. Sometimes I’ll just loop stuff up, but other times I’m re-pitching, flipping, and warping it to the point until it’s unrecognizable. I try to combine different techniques.

Ronesh: So basically, I’m just on a MacBook Pro with Ableton Live. I just use a bunch of soft synths. I use the keyboard on my MacBook to basically play notes when I want to play something live. After I record it I’ll go in and edit it in my workstation. It’s pretty simple. I tried to experiment with adding different hardware and software to my workflow and I found myself going back to the same way I was making beats 5-6 years ago. I’m just continuing to fine tune that process.

TRHH: On the song “Survivor’s Guilt” you speak about your anxiety and never being at peace. What’s at the root of these feelings and are you doing anything to try fix the problem?

Ronesh: That’s a good question. I would say when I wrote that song it wasn’t necessarily speaking to a state where I feel like this all the time, I’m always anxious, and I’m always depressed. It was more like I was having a really stressful couple days. For me just writing and recording music is a big way of dealing with those feelings. However, sometimes that is not enough. I think for me dealing with it, the best thing for me is to try to stay grounded in the present moment and not worry too much about either the past or the future. Sometimes it’s easier said than done, but that is the way I keep myself grounded when some anxiety may kick in.

TRHH: Just live in the moment.

Ronesh: Yeah. Not in in any kind of reckless way either. Just in the sense of not worrying about things that you can’t control.

TRHH: Do you have a favorite song on Olive Branches?

Ronesh: I would say my favorite song is probably the opening track “Float.” I was really honored to work with Myka 9. I knew about Freestyle Fellowship when I was younger, but I didn’t really get into them until maybe ten years ago from their older records and Myka’s solo stuff. He’s a real cool dude. I made that beat and I really liked the jazzy feel to it. It was very meditative. That’s why I chose to start the album out with it, even though it was a mellow track.

TRHH: Who is the Olive Branches EP for?

Ronesh: I would say first and foremost it’s for you if you’re into dope beats, listening to instrumental music, or you’re just a beat head. The raps on there are dope, too, don’t get me wrong, but I conceived the idea first as more of a producer album. I think people who like to hear jazz samples, swinging drums, and kind of boom bap, but not afraid to be experimental, I think that’s the general audience that I had in mind for this. Really, it’s for everyone who might dig it. I don’t want to limit myself.

Sherron Shabazz is a freelance writer with an intense passion for Hip-Hop culture. Sherron is your quintessential Hip-Hop snob, seeking to advance the future of the culture while fondly remembering its past.
View all posts by Sherron Shabazz →
This entry was posted in interview and tagged California, Chicago, Des Plaines, EP, Float, Illinois, interview, Oakland, Oh Say, Olive Branches, Ronesh, Survivor’s Guilt. Bookmark the permalink.