Edo.G: After All These Years 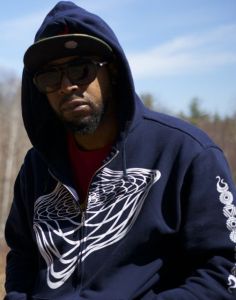 With over twenty years under his belt in the business of rap Boston based emcee Edo.G continues to produce excellent product. Edo’s latest release was funded by fans via Kickstarter, and is the first release from Edo’s 5th & Union record label. ‘After All These Years’ is easily one of the best rap albums of 2014 and the title says it all – after all these years, Edo still goes hard on the mic.

Edo.G spoke to The Real Hip-Hop about his new 5th & Union record label, working with Chuck D of Public Enemy on the single ‘Fight’, and his new album, After All These Years.

TRHH: Explain the title of the new album, ‘After All These Years’.

Edo.G: The title was just fitting being that it was my eleventh studio album. I’ve been basically putting in work since day one, man. And I’m still grinding hard and at a high level. I think I’m actually at my highest level right now lyrically in my career and I’m still putting it down after all these years.

TRHH: Why’d you decide to go the Kickstarter route for this album?

Edo.G: First because I really wanted to see if my fans would support me. That was one of the main reasons, man. Obviously me and my partner Jamieson Grillo started our own label called 5th & Union that we put this record out on. That was all part of it. I wanted to be totally independent and do what I wanted. I really just wanted to see if the fans would step up and help me reach my goal. That really motivated me more to keep hittin’ fans with music because they did. They over-funded it and we were able to launch the label and put out this product right now.

TRHH: How’d you wind up working with Chuck D for the single ‘Fight’?

Edo.G: Of course I’ve known Chuck for a long time. They were in town in Boston a couple of years back and he was doing the Hip Hop Gods Tour. I came through and rocked out with Monie Love, and everybody. I asked him, “Chuck, I need to get you on my album. I got this record that I think you’d sound dope on,” and he was like, “Word, send it to me.” He knocked it out and it was that simple. And then he was blessing enough to do the video which actually took it to another level. He’s a great dude, man. I work with him and I definitely look to him for certain advice. A lot of people don’t know he has an aggregate called SPITdigital where you can go through them to get on iTunes. That’s what I go through to get my iTunes stuff. Check out that site, SPITdigital.com.

TRHH: I talked to Chuck and he’s one of my most favorite interviews. We spoke in depth about SPITdigital. It’s opening up doors for a lot of people to do their own thing.

Edo.G: They blessed me by putting me down with that. For those that don’t know, unless you’re a label or a web guy you have to go through a third party to get on iTunes. Chuck and them only take 10 percent.  There’s no uploading fees like TuneCore and all these other sites that people go to and basically get robbed. Deal with Hip-Hop, it’s a fair deal.

TRHH: Pete Rock is on the album. You seem to have incredible chemistry with Pete dating back to My Own Worst Enemy. Talk about what it’s like working with Pete Rock.

Edo.G: Pete is obviously one of the best producers in Hip-Hop of all-time Every time I get a chance to do something with him I’m super-psyched and the rhymes just seem to come out easily. They flow out of me, man when I’m rocking on his beats. These actual beats were old beats. They were from cassettes that I didn’t use on My Own Worst Enemy. I rehashed three beats from back then and put them on this album. You can’t tell that they’re from 2002 or whenever. They sound like they’re from right now. His music is timeless and that was a point that I wanted to prove.

TRHH: The last time I spoke to you was five years ago when Arts & Entertainment came out. You said that there wasn’t enough originality in Hip-Hop at the time. Do you think that’s changed since then?

Edo.G: Yeah. I think there are definitely a lot more people doing their own thing from that time. But still, if you’re talking commercially things haven’t changed. You know how that goes. It’s the same thirty records across the country. That hasn’t changed but independently people are doing a lot more things. You got 50 Cent who is independent now and there are a lot more people who are willing to take everything into their own hands and do it all.

TRHH: It’s definitely changing. It seems like more of an entrepreneurial movement going on. Do you think that’s due to music being more accessible by it being more digital now?

Edo.G: Yeah, of course. The internet plays a huge role in us being able to do it independently. We can still get to the masses without having to pay millions of dollars to have our records and videos played. There is no real outlet for videos besides the internet if you’re talking independent and underground Hip-Hop. We’re able to reach the masses and millions of people, thousands in my case, but other people reach millions independently without any of that. It’s played a big role. Obviously it’s diminished the CD except for live performances. You can sell a ton of CD’s on the road. With this album we brought it back with vinyl and cassette – we went all the way.

TRHH: On the song ‘16s’ you spit some battle rhymes. Recently I’ve been hearing a lot of fans say they don’t want to hear rapping about rap. They want to hear stories that they can relate to or stuff that touches them. Why do you think this segment of rap fans is growing when battle rap is what the music was founded on?

Edo.G: In underground Hip-Hop there are a ton of people spitting battle raps. Maybe if the people are crying out and asking for stories and things like that, that’s what they want. The song 16s is really self-explanatory – it’s kind of a battle rap song. That particular record is just about that. I spit a lot of battle rhymes on this album on certain songs but you do have songs like ‘Da Beef Goes On’ which talks about domestic violence and different things that go on in relationships between grown men and grown women. I got a song with Walter Beasley called ‘Let Da Horns Blow’, produced by Pete Rock. I try to touch upon a lot of things in one verse to make you think.

TRHH: What do you hope to achieve with your label 5th & Union?

Edo.G: We’d like to really be a niche label. We’re trying to carve out our own little niche and create a nice catalog of good music. We do intend to put out other artists in the future. Right now we’re focusing obviously on me. We still have more product from me coming. I have a documentary called ‘I Got to Have It’ coming next year that we’re finishing up. We got another record coming next year too. We just want to be that little niche label that gives good product and puts out a lot of vinyl, cassettes, and special packages. We feel that people like to get more for their buck than just a CD or a download. We want to give them a bunch of stuff. We’re trying to be a brand basically and feed the people what they need.

TRHH: Why is After All These Years an important album in 2014?

Edo.G: It’s important for me because I want to just continue to do what I’ve been doing on a high level, and even on a higher level in these next years to come with that real Hip-Hop music. For me it was important to do the Kickstarter and make sure that my fans really wanted to hear me. If that didn’t happen it would have been, “Oh well, what’s the next step?” The fans spoke and they want to hear the music so I’m going to continue to feed ‘em. That’s why it was an important album for me. And for the rest of this year we got more videos coming – a bunch more stuff for this album. Be on the lookout, BOLO![Laughs].

TRHH: Alright, man. Thank you for taking the time to talk to me. I really appreciate it.

Edo.G: I appreciate it too, man. All the people out there check the new album, After All These Years. You can get it on iTunes or redline.bigcartel.edog. Follow me on Twitter @EdoGBoston, Facebook: EdoGBoston, and Instagram: EdoGpics. One Love!

Purchase: Edo.G – After All These Years

Sherron Shabazz is a freelance writer with an intense passion for Hip-Hop culture. Sherron is your quintessential Hip-Hop snob, seeking to advance the future of the culture while fondly remembering its past.
View all posts by Sherron Shabazz →
This entry was posted in interview and tagged 16s, 5th & Union, After All These Years, Edo.G, Fight, interview. Bookmark the permalink.