Encyclopedia Brown: Everything You Need 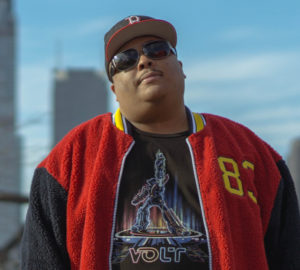 Emcee Encyclopedia Brown and producer Kenny Keys are The UHssentials. The long-time collaborators released their first full-length project as a group in 2019 titled, “Everything You Need.” The album combines Kenny’s boom bap and soulful sounds with Brown’s lyrics that embody everything from humor to heartbreak.

Released by Machine Wash Music, Everything You Need is produced entirely by Kenny Keys. The 10-track album features appearances by Psalm One, Wes Restless, Longshot, and Defcee.

The Real Hip-Hop spoke to one-half of The UHssentials, Encyclopedia Brown, about Everything You Need, working with Kenny Keys, and his upcoming projects throughout 2020.

TRHH: Why’d you call the album “Everything You Need”?

TRHH: How is Everything You Need different from The UHssentials EP?

Encyclopedia Brown: We recorded Everything You Need first. We recorded that back in 2016. I flew down to Texas to record that album with Kenny. We did it in three days. In between that and getting everything mixed down I was sitting on the album for a while. I was kind of getting antsy, and I wanted everybody to hear it so bad. To me keep my sanity I ended up putting together the EP to get them ready before we dropped the album. I didn’t want it to fall on deaf ears, so I put the EP together to whet their appetite so they would be eager to hear what else we could do. I put the EP out and pressed forward with getting Everything You Need finalized. It was just kind of a teaser for people to see what we do. I didn’t want to just drop the album out of nowhere and have people miss it.

TRHH: You’re a producer yourself and you’ve worked with Kenny Keys in the past, how much input did you have on the production side of things for the album?

Encyclopedia Brown: A lot of these beats I’ve had for a long time. Me and Kenny have been friends for a while. We started kicking around the idea of doing an album in 2012. I went through 80-to-100 beats and I picked 20 something beats. I couldn’t just make one whole album with 20 beats so I picked them. Kenny knows what I like. I have gigabytes of Kenny’s beats on a hard drive. I picked them all except for “EBFD.” He sent me that one when I was in Florida for the J Dilla weekend. He said, “Check this out. I think it will be good for the album.” Other than that, everything else I already had for years.

Encyclopedia Brown: You know what’s funny? Everybody says that. I’ve gotten a lot of great feedback on that song. People are like, “I love that song!” and it’s crazy because when he sent me the beat I was super-mad. I was in Florida and got into an argument. He sent me the beat and I got all the anger out through that song. It’s funny how many people say that. One of my friends, her daughter loves that song. She’s like 13 and it’s her favorite record. I didn’t think that was going to be the one. It was just a real song for me.

For years people would front on me as far as working with me. People would front on Kenny, too. So, it was a big middle finger to everybody who ever fronted on us. I’ve gone through that a lot. Now people want to work with me, but there were years where I was the odd man out. I was the kid on the playground that nobody wanted to play with. It came from a real place, but it’s funny how many people really like that song. I’m not mad at ‘em though [laughs].

TRHH: I feel like the people frontin’ on you is just the Chicago Hip-Hop scene, but I’m not in it like that. Is that a specific Chicago thing?

Encyclopedia Brown: I don’t want to make it a Chicago thing, but the thing about Chicago is that it’s real clique-ish. So, if you’re not cool with such and such then you’re not cool. In that sense, it is kind of a Chicago thing. A lot of people would front on me for a lot of stuff. Even when I started deejaying people were like, “You’re a rapper, what do you know about deejaying?” So, it took other cats who deejayed and rapped like Dirty MF to take me under his wing and show me the ropes. Other DJ’s started noticing and said, “He’s doing a lot of gigs, I guess he must be a DJ.” Then they’d come out and hear me spin and be like, “He’s actually pretty good.” It took certain DJ’s to give me a chance. With the whole clique thing people don’t want to give other people a chance to get on it. You’d be surprised at what people can do.

The thing with Chicago is, we’re so hard on ourselves and our product that it’s like what they say about New York – if you can make it there you can make it anywhere. If you can please a Chicago audience you’re golden because the first thing we’re going to do is front. If you can change the minds of the naysayers in Chicago then you got something. It is a situation where people fronted. In Chicago we’re quick to front on our own but we’ll give love to out of town cats. You’ll show love to New York or L.A. cats before you show love to Chicago people.

I did a show where I was deejaying for Psalm One. We opened for Wu-Tang and they tried to boo us. I stopped the record and said, “I’m not going to finish with the show unless you respect the artist on stage. We’re from Chicago. You’re not going to boo us and show love to these New York cats.” They stopped and we got through the show. We were one of the only acts to get through our show. Everybody else got booed off stage. The people that Wu-Tang brought with them to open up like La the Darkman and Willie the Kid, they booed those cats. That’s Chicago. Chicago is very harsh.

TRHH: When was that show?

Encyclopedia Brown: That was like 2012 or 2013 at the Congress. It was last minute when she got asked to do it and I had just flown in from Florida that night. It was insane. It was actually scary. We finished up sound check and then they did doors. As soon as they opened the doors these people ran from the entrance to the front of the stage. I got shook because I saw 200 people running toward me. I was like, “what the hell is going on?” It was an experience. Wu-Tang fans are very tough to deal with.

TRHH: I think it’s more specific to Wu-Tang fans than it is to Chicago Hip-Hop people.

Encyclopedia Brown: The doors were at 6:30 and Wu-Tang didn’t go on until 10:00. They were tired of the opening acts. They wanted Wu-Tang now!

TRHH: Your voice is ill and your lyrics are great, but what sets you apart is the humor in your verses. With the currently climate of political correctness, have you ever changed your lyrics up to avoid offending people?

Encyclopedia Brown: Nah, I don’t. I didn’t grow up listening to music like that. I grew up listening to cats who say what they wanted to say. I’ve had people say they were offended by music. I offended a little person. They said they didn’t like a rhyme I said, “Well, I’m not going to change it. I respect your anger and all, but this is Hip-Hop.” I had a line where I said, “I’m going to attacking, like Big Pun’s heart organ.” This was right after he passed. I wasn’t going to not say that. This is Hip-Hop. You pull from whatever. The rawer the more people will feel it. I get to say what I want. It’s my mic, I do what I want with it. I don’t pull no punches. There are certain things I know you’re not supposed to say, and I’ve got enough class to not say certain things, but if I say something I don’t change it. I just keep it as is.

TRHH: The album has a lot of relationship songs. “How to Sink a Friendship” stands out. Is that song based on a true story?

Encyclopedia Brown: [Laughs] Yeah. It is based off a true story. I base a lot of stuff off of my life. When you mess with an artist there’s a chance you’re going to be put in a song at some point. Somebody is going to write a song about you. This album does have a lot of relationship songs. I didn’t notice as we were making it. It’s kind of weird because I was single. I did date somebody for a few years, but none of those songs are about her. They’re about stuff that I dealt with from the past and it makes for good music a lot of the times.

I didn’t purposely set out to make it like that, but it ended up being like that. The relationship part kind of stands out because the songs that I’m talking about a chick are back-to-back-to-back. That stuff is important. It’s just real stuff that people go through. People go through relationships and deal with people they shouldn’t. It’s just real stuff. I can only write about what I know and one thing I do know is dealing with women. I know a lot of other things, certain stuff I can’t talk about, but I can talk about relationships. I tried to make something that people could feel and relate to.

TRHH: What’s next up for E. Brown?

Encyclopedia Brown: Next I’m about to drop a beat tape. A sequel to Brownies coming out on Machine Wash Music. I’m also doing a collaborative beat tape with this cat Therapy. Those are coming out within the next few months. I’ve got an album with this up and coming producer named Stone Flacco. We recorded that a few years back. That should be out this summer. I’m also working on a collaborative album with Coolout Chris from Urbanized Music, and I’ve got another album that’s pretty much done, it only has to be mixed and mastered. It’s with a homie I grew up with, Esley Snypz. He’s the first producer I ever met. We went to high school together and had a crew back in the day. I’m also doing an album produced all by me. There’s also two more UHssentials albums coming out. I don’t know when. I gotta finish writing them.

Purchase: The UHssentials – Everything You Need

Sherron Shabazz is a freelance writer with an intense passion for Hip-Hop culture. Sherron is your quintessential Hip-Hop snob, seeking to advance the future of the culture while fondly remembering its past.
View all posts by Sherron Shabazz →
This entry was posted in interview and tagged Chicago, Duck and Cover, EBFD, Encyclopedia Brown, Everything You Need, How to Sink a Friendship, Illinois, Kenny Keys, Machine Wash Music, The UHssentials, The UHssentials EP, Uhssential Theme Music. Bookmark the permalink.