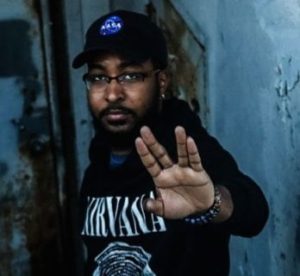 eTTo is a 24-year old producer and emcee from Chicopee, Massachusetts. His music is otherworldly yet relatable, having been influenced by everything from 80s pop music to punk. eTTo came onto the scene in 2012 with a release called “eNIGMA” and has been on a creative roll ever since.

The Real Hip-Hop spoke to eTTo about Cosmosutra, the development of his unconventional style, and his upcoming dark but dance-influenced album.

TRHH: What’s the meaning behind the title ‘Cosmosutra’? It seems to have a double meaning.

eTTo: Yeah, yeah. The double meaning is kind of not for interpretation but when I penned it I was like it’s more than something sexual it’s something mystical. When you combine the two words it comes out to be something like that.

TRHH: Is that how you saw the album?

eTTo: Yeah. If you run through the tracks a lot of them are about girl or meditation and a higher power. I just kind of jammed the two words together and it made something that rolled off the tongue based on each track.

TRHH: The video for ‘Battlemeditation’ was really cool. Where was that filmed?

TRHH: What were you doing in Kenya?

eTTo: A good friend of mine who does music as well, Machakos Kyalo is from Amherst so we linked up and did a couple of shows in Massachusetts. He moved to Kenya for close to eight months. The bottom half of the eight months he was like, “Come through in December if you have bread. We’re going to make some music and you’re going to help me engineer this project for the kids out here.” I said yeah, of course. I went out there with my gear in my suitcase, which is crazy. I stayed there for like a month.

TRHH: Your style is very unique. How did you develop your eclectic style of music and who are your influences?

eTTo: I used to be pretty boring, but I had this upbringing of not boring music and I kind of forgot what my roots were. In high school I was tired of being like everyone else. What about Nirvana, Prince, and all the stuff that my mom put on? I started listening to that stuff again and that kind of fathered what I do now. Specifically I’m heavily influenced by Outkast. I love Andre 3000, he’s probably my favorite rapper. The music I grew up with was Prince, Nirvana, a lot of jazz, and believe it or not my mom was into country. So just listening to everything and not really having that “I’m not going to listen to that” mentality got me to where I’m at.

eTTo: I used to have a really cool set-up when I was in Boston. I still have most of the gear. I have an Akai MPK49. I customized the skin, which is really cool and I customized the presets to work for Reason. Believe it or not I use all 2011 software like Reason 5, FL 10, and Pro Tools 10 is the most updated thing I have. What I do is I do a lot of my sampling, if I sample, and lay down basic chords in Fruity Loops because I know how to mix it and I mix it a certain way. I bring it into Reason because it’s great for mastering. It has crazy sounds and I add my drums in reason because it mixes drums really well. I bounce it back to Fruity Loops for special effects like reverb or DJ cuts. I have this algorithm for this program called Gross Beat where I know how to do DJ cuts without using a turntable and then boom, I bring it into Pro Tools and record the song.

TRHH: How did you get into production?

eTTo: About the time that I stopped listening to boring music I got into music and I rapped. I wasn’t really good at rapping when I first started [laughs]. Everyone kind of has their start. Eventually when I started to get good I needed beats. I was tired of waiting for people. At the time YouTube beats were terrible. I got an Akai MPD that my mom bought me and Fruity Loops from my friend who was a producer. He taught me a little bit and I started making beats.

TRHH: Your name is eTTo and you’re from Boston. Have you ever actually met Edo G and if so what does he think of your name?

eTTo:  [Laughs] I have met Edo G and it’s funny because to this day people are like, “eTTo, like Edo G?” and I’m like, “I guess.” I got my name from my last name but then I looked into Edo G and I’m like, “Oh, he’s fucking dope!” I went to a beat showcase in Boston and Edo G was there! Me and him laughed at that anecdote of people confusing me for him. We look nothing alike. He’s like big. We dapped each other up and it was cool.

TRHH: What are your goals in the music industry?

eTTo: I’m super ambitious. Sometimes too ambitious and it’s catching up to me now. I wanna do everything. I direct, I produce, I engineer, I have a band, so I guess at the end of the day I want to be a creative director. I see potential in people. I have a music group called DUBSEE. I know what people can do and I try to project that without forcing that so that way they see it themselves and develop into it. Forcing it never works. I want to be a creative director and a producer — both beat-making and otherwise – just constructing a song. I want to be a director with films and music videos. I have this company called Pass the Soul. It’s part of my umbrella company called Winner Circle that involves DUBSEE, my production, and Pass the Soul.

Pass the Soul is a non-profit. Right now it’s tailored to Massachusetts because that’s where I’m from. I want to boost the art ecosystem and the commerce ecosystem in Massachusetts using music and art. Every August we put on a festival with not just musicians and performing artists, but painters, t-shirt designers, and hat designers. We focus on Massachusetts to develop this ecosystem kind of like Drake did in Toronto. That’s my ultimate goal that Pass the Soul be something so big that eventually there’s Pass the Soul New York, and Pass the Soul Chicago.

TRHH: What’s next up for eTTo musically?

eTTo: I’ve been painstakingly grinding on my next project because I think it’s the best thing that me and the people involved have made. It’s a project that’s super inspired by the 80s because my mom put me on to that stuff. Not just Prince and Michael Jackson but clubhouse music like Stevie B – Diamond Girl. Madonna also had that style. Her producer Jellybean produced that sound and you couldn’t help but dance – it felt super nostalgic. I’m drawing on that and that project is called “Never Thought We’d Make it This Far.” Right now I’m kind of shifting my visuals. The video for Battlemeditation is the last visual that’s geared toward Cosmosutra. That video has super bright colors, sun, outdoors, kids, that’s going to be the last of that. My new videos are going to be very dark and Michael Jackson inspired and so is my music.

Sherron Shabazz is a freelance writer with an intense passion for Hip-Hop culture. Sherron is your quintessential Hip-Hop snob, seeking to advance the future of the culture while fondly remembering its past.
View all posts by Sherron Shabazz →
This entry was posted in interview and tagged Battlemeditation, Boston, Chicopee, Cosmosutra, DUBSEE, eTTO, interview, Massachusetts, Never Thought We’d Make it This Far, Pass the Soul, The SOULitarian, Winner Circle. Bookmark the permalink.