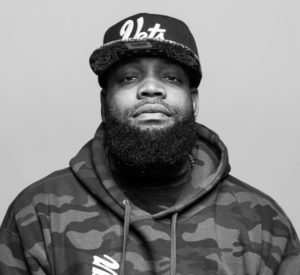 Flash chatted with The Real Hip-Hop about drawing inspiration from the youth in Cambridge, working with producer Lightfoot, and their new album, Flashlight.

TRHH: How did you hook up with Lightfoot and decide to do Flashlight?

Flash: Me and Lightfoot actually work together. We have a program called “The Hip Hop Transformation” in which I co-direct with a guy named Darrin Korte. Lightfoot is our engineer/producer in the program for 14-to-18-year olds. We’ve been together for the past 3-4 years. Watching what he does with the kids, what I do, and being musically inclined it kind of made sense. After we finish with the kids we go back to my studio, smoke, chill, listen to music, and it just popped up as an idea and we just made it work.

TRHH: How rewarding is it to work with the youth at Hip Hop Transformation?

Flash: It keeps the energy going. It keeps me motivated. It’s very empowering to see young teens gravitate toward the music and be able to create it. Our whole platform is teaching them how to record, produce, engineer, and write their own music. In a six-week program they put together a whole album. We’re talking about kids who have never recorded in a booth, ever made a beat, or engineered. The stuff we’re able to teach them in those six weeks is remarkable. We finish with about 27-to-30 songs. Most artists can’t even finish with two in a month, let alone two months. It’s amazing.

TRHH: How was doing this project different from doing an N.B.S album?

Flash: With Natural Born Spitters it’s two of us, so it’s a consensus type of thing. I’m more of a 90s Hip-Hop era – lyrics, beats – that type of feel. Knucks is there too, but he’s also in the club. He’s partying and he lives that life, so he wants to sometimes do some of the trendy stuff that’s going on. We butt heads sometimes, but that’s what makes us dope. It’s kind of a yin and a yang, but when it comes time to do what we naturally do, which is our natural sound, it’s dope. With this one I had full direction of what I wanted to do and what I wanted to hear. I jumped out the window with it, man. I hope people rock with it.

TRHH: What inspired you to come up with the concept for the song “15”?

Flash: The beat. Something about the beat was out of this world. The dude Ju Jilla from Chicago, I was feeling the vibe. In Chicago you have that type of drill music which is pushed out to the world, but you have Ju Jilla and a few other dudes. I’m listening to their style and it’s like east coast rap with Chicago slang and that feel. I was thinking of what it was like when I was 15 and the era I came up in. A lot of the songs are guided by the beat. Whatever Lightfoot sent, those are the names of the beat and I just made songs out of it. He named the beat “From Down Under” and I equated that with being in Australia. A lot of the feels came from the beats. What the beats told me when I listened to them, that’s what I wrote about. That 15 beat was it. I just went with the flow of it.

TRHH: So, the song “From Down Under” isn’t based on a trip to Australia?

Flash: It is. It is based on a trip to Australia. Our time out there in Sydney.

TRHH: The song “Cape Verdean Princess” gave me anxiety just listening to it! Is that song based on a true story?

Flash: Yeah, yeah [laughs]. A few true stories! That’s compiled from relationships I had with different Cape Verdean women. They’re beautiful, they get on your bad side, they’re crazy, but they will take care of you if you handle your business. A lot of mistakes I made, made it difficult to deal with them. It’s one of my favorite songs, by the way.

Flash: “IDK” featuring Red Shaydez from Boston. “Shred” of course with N.B.S. I love the intro. They’re all my favorite songs but ones that pushed it for me was IDK and “$ Gang.” $ Gang is real dope. I picked those because there is a true message behind that. A lot of people gravitate toward likes, fame, and exposure. I don’t know what tomorrow brings, but today I’m trying to live. I think that’s some real stuff, especially dealing with all the people who have been passing in our regular lives, let alone some of the people we look up to in the entertainment world. That really stuck to me. With $ Gang I feel like people will do anything for exposure. On the song I’m talking about how people have Gucci belts and all that other shit. They look rich but if you call them up and ask for help they aren’t able to do it. They’re frontin’. Those two are really dope and they send a message if anything. Try to get your priorities right.

TRHH: Who is the Flashlight album made for?

Flash: I used to do a lot of driving. Whenever we go on tour I’m like the road manager, the artist, and the driver as well. I like being able to listen to music. Music gets you through a lot of rides, especially when you’re tired. I call it riding music. When I could take a long ride, I like to listen to something to get some knowledge and be able to vibe out. I think it’s for anyone who can appreciate what the 90s music and the golden era has done. As well as people who appreciate good lyrics and good beats. I think anyone can listen to it as long as you appreciate lyrics with a message and the vibe. I feel like I’m creating a new genre with Lightfoot because of the types of beats that he makes. It’s melodic music. We do rider, relax, enjoy, smoke music.

Sherron Shabazz is a freelance writer with an intense passion for Hip-Hop culture. Sherron is your quintessential Hip-Hop snob, seeking to advance the future of the culture while fondly remembering its past.
View all posts by Sherron Shabazz →
This entry was posted in interview and tagged 15, Boston, Cambridge, Cape Verdean Princess, E’Flash, Flash, Flash and Lightfoot, Flashlight, From Down Under, interview, Lightfoot, Massachusetts, N.B.S, Natural Born Spitters, The Hip Hop Transformation. Bookmark the permalink.