Posted on September 24, 2018 by Sherron Shabazz 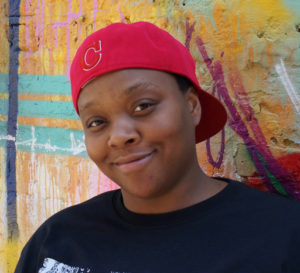 Chicago emcee Fury takes a traditional approach to her music that’s unconventional in today’s Hip-Hop landscape. Inspired by the like of Lauryn Hill, Eve, and Queen Latifah, Fury’s music carries on the tradition of putting out music with a message. Fury’s latest release is a 7-track EP titled “Black Magic” that combines live instrumentation with Fury’s empowering lyrics.

The Real Hip-Hop spoke to Fury about working with a live band, her ongoing quest for acceptance, and her new EP, Black Magic.

TRHH: Why did you title the new EP “Black Magic”?

Fury: Just a lot was going on around the time, like Black Girl Magic. I just felt that. I felt strongly about that. What I do just feels magical. I don’t know any other way to put it. There’s just a certain level of passion, honesty, vulnerability, and just something magical about a spirit that just won’t quit and will not die or go away. I feel like we all have that in us. I just thought that was a good name, plus I’m black and I’m magical [laughs].

TRHH: What inspired the song ‘Never Shoulda Count Me Out’?

Fury: Ooh, well just the people who have kind of given up on you along the way. You have people who just don’t believe as much as you do. I’ve come across people like that. I’ve had relationships where they were just not supportive of my music. I think that’s a big part of it. We as artists deal with this all the time – people that don’t come to shows and they don’t buy merchandise. It kind of makes you want to doubt yourself. You gotta keep going, moving forward, and believe that you’re here to do something important.

TRHH: Do you take those slights and lack of support personally?

Fury: Yes, at times I do, but then I just look at the times we’re in and I just feel like people have so much that’s thrown at them on a daily basis as far as marketing. There are a lot of artists. It seems like everybody sings and raps or does something artistic. I try not to, but just because it’s my stuff I’m like, “How could you not support Fury? Why wouldn’t you rally behind that?” A part of me takes it personal but I realize that you can’t focus on the ones who aren’t supporting and I feel like I’ve wasted a lot of time on that. Now the older I get I just have to realize that you have to focus on the people you can reach. And it’s strange because a lot of time it’s people I’ve never met. Those are the people that become fans. You can’t depend on friends and family because they’ve known you your whole life. They’re used to a certain type of you. That’s just something I had to learn and I try not to take it as personal, but you still want people to be there for you.

Fury: Definitely 90s emcees. I grew up on Queen Latifah, Left Eye and people like that. Lauryn Hill was a big part, too. Growing up just seeing them make such positive music, and not just music, but TV and movies. It was good empowering music. At the time I was 7 or 8 but it really stuck with me that they were successful off of something that was positive. There was a lot of rap out there that was talking about money, drugs, and sex. They were able to capitalize off something that was very empowering and positive for young girls. I knew it could be done. The last ten or fifteen years it’s been a different story as far as women in rap. It just didn’t make me forget where I came from or my roots. A lot of people gravitate toward it because it gives them that 90s feel as far as music with a message.

TRHH: One thing that separates you from a lot of new artists is your performance with a live band. Why did you decide to perform with a live band and how long have you been together?

Fury: We’ve been playing for about a year and a half. It was actually presented to me. I have friends with bands and I thought it was cool. I performed with a friend of mine, Jovan who has a band – she had her band first. I was at a barbecue one day and my bass player was like, “Oh my God, you’re awesome! I’ve been wanting to set up a rap band,” and six months later he pretty much got all the artists together, we did a rehearsal, and from the first time we jammed together it felt perfect. It wasn’t a conscious decision, it was just like, I know people with bands, it would be cool to try it. I think two weeks after we got together we were opening for Rah Digga at Subterranean. That was like last February, so I knew it was going to be something special just from things like that and so many other opportunities have opened up. At the end of the day I’m still Fury and with or without a band I still have to be Fury and that’s something I wanted to maintain as well – my independence. This EP was a collaborative process but my next one might be a studio project with producers and I might do DJ sets. I just want to shake it up a bit.

TRHH: What’s your opinion on the current Chicago Hip-Hop scene?

Fury: I definitely think that there’s a resurgence. I have a lot of friends putting out great music, even people that I don’t know but I’m still a fan of. I think we’re up against a lot with what’s in the media about Chicago. They still put us in that whole Chief Keef arena and trap and that’s all that we rap about. I know that’s really not the full picture. I think that it’s vibrant, it’s still coming up, and we’re finding our way. I love the fact that you can’t put us in the box. We’re all that and more. We’re so versatile just being from the Midwest. We have a little of each coast in us. I definitely think it’s versatile and full of talent.

TRHH: On the song ‘Home’ it sounds like you’re searching for acceptance. Would you say that’s an accurate assessment?

Fury: Yes, definitely! Just somewhere to feel safe and welcome. I travel a lot. My old job I had I was a store set-up supervisor so I would be all over the country. I’d be gone half the year and I did that for five years. A lot of ‘Home’ was written from airports, airplanes, and hotels. That was kind of it too, I felt like where I do belong? Where is home? There’s so many new faces you meet and it’s hard to make an attachment when everything is new every other week. That’s pretty much what it’s about, just finding those familiar faces, somewhere to come and rest your head, and just know that you can be you and don’t have to be on all the time.

TRHH: Do you currently have a day job?

Fury: Yes, yes. Just part-time. I had to let that job go just because it was taking way too much time from my music. I work part-time and odd end stuff like Uber if I need extra cash. It’s that and just shows, music, and selling merchandise and really trying to hit it as an independent artist.

TRHH: What’s the toughest part about being an independent artist?

Fury: Definitely to restore balance. I’m very big on balance. Everybody’s story is not positive, that’s just not how life works. I feel like a lot of the media is just focusing on the negative and I feel like it’s been like that for a long time, especially with women in rap. They kind of all look the same. I just want to see realer artists without all the makeup and being under-dressed. I want to see women in Hip-Hop that look like me just to restore balance – something different. I feel like right now it’s all the same messages – money, sex, and drugs. I just know there’s so much more to life than that. My main goal is to represent women like me and to restore balance, because there hasn’t been any for a long time now.

Sherron Shabazz is a freelance writer with an intense passion for Hip-Hop culture. Sherron is your quintessential Hip-Hop snob, seeking to advance the future of the culture while fondly remembering its past.
View all posts by Sherron Shabazz →
This entry was posted in interview and tagged Black Magic, Fury, Fury Hip Hop, Home, Illinois, interview Chicago, Never Shoulda Count Me Out. Bookmark the permalink.