Posted on September 17, 2018 by Sherron Shabazz 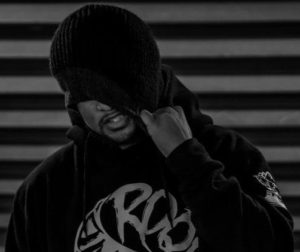 Phoenix based emcee RoQy TyRaiD is back with an old school approach to delivering music. TyRaiD’s last full-length studio album “The Dichotomy of RoQy TyRaiD” was released in 2016, TyRaiD’s latest music efforts are a string of singles released throughout the year 2018.

The first release from RoQy TyRaiD is titled ‘Jim Kelly.’ The single is a super-lyrical and funky song produced by Arza1990 that pays homage to the martial arts legend of the same name. The second single ‘PLYNwcha’ is produced by Motif Alumni and serves as an eerie manifesto for TyRaiD at this juncture of his career. The latest single ‘MC4REAL‘ sums up who RoQy TyRaiD is an artist. TyRaiD uses his rapid fire flow over modern music and proclaims on the chorus, “Make it look easy, yeah/I emcee for real.”

The Real Hip-Hop chatted with RoQy TyRaiD about his new singles, how he was able to quit his day job to rap full-time, and if he feels like he’s overlooked in Hip-Hop.

TRHH: Why’d you take the route of dropping singles this summer instead of a full album?

RoQy TyRaiD: There’s a lot of content that I have been dying to get out that I didn’t feel needed to fall under the traditional album format. It’s kind of like tapas. You go to a restaurant and you need that food for thought. You may not want to eat an entire meal. If you compare music to food for thought it would be more like tapas as opposed to an entree. I have something that fits in its own right as opposed to this grandiose idea. It’s just something straight to the point that brings people up to speed as to my viewpoints of what’s going on and really kind of setting the momentum forward for an upcoming project. It’s wanting to get content centered around more or less myself as opposed to the idea of an album.

TRHH: On the song ‘Jim Kelly’ you barely stopped to take a breath. How many takes did it take you to knock that song out?

RoQy TyRaiD: I hate when people say they do it in one take because it’s more or less a bragging right sort of deal. I did do it in one take but I’m more of a performer so I perform until I feel satisfied with my content. I’m able to do that without necessarily needing breaks due to years of practice, crazy cardio, and getting my body right in order to match the content of the music that I’m putting out. I was just watching a video of myself earlier of me doing “Jim Kelly” and I can see why people would ask that – there’s a lot going on.

TRHH: What is your writing process like? Do you write to the beat or when rhymes come to you?

RoQy TyRaiD: I’m very whimsical when it comes to my writing practices. I typically memorize everything that’s in my head. I may translate it to something tangible, but I just ride around with an idea. I may use the beat for specific cases. I may feel inspired by other works and want to include that on the beat that I’m currently working on. You know how a chef would travel to different lands and see what other cultures are doing and their specific culinary practices? That’s how I would approach certain beats sometimes. I may source a different production for ideas or I might just decide to stick to that beat and not listen to any other song until I’m done with that beat in order to not let other ideas sully what I’m working on then and there. I guess it depends on the mood and music.

TRHH: Phoenix is not a place that gets mentioned when we talk about Hip-Hop. What’s the Hip-Hop scene like in Phoenix?

RoQy TyRaiD: Growing, growing. When I came out here it was bare bones. You could throw a tumbleweed down the street. We only had a few venues to really work with. We had legends in the local scene that helped get us to that point, so without them we wouldn’t be here. I took an active role with some other emcees of my generation in cultivating shows and opportunities for other emcees to get out there, whether it’s knocking out radio features and things of that nature. Now I would say it’s really starting to find its form. I would say it’s in a creative adolescents. There’s a lot of new emcees who are starting to find their way in the local avenues and what have you. Some people went to the school of Roq, or the school of Mega Ran, or the school of Futuristic. You can see our influences and it’s kind of crazy watching your little brothers build something and take the reins while you move on to something else. I guess I say that to say Phoenix does have a very powerful scene, but not only that, from the standpoint of patrons we’ve always been a treasured tour stop for artists of other regions. I guess our artists are starting to match what we bring when it comes to other artists visiting us. We have a strong scene I’d say.

TRHH: On the Dichotomy of RoQy TyRaiD album you have a song called “Crown Me” that you absolutely destroy. What was the inspiration behind the song? Do you feel like you’re overlooked?

RoQy TyRaiD: That’s a really good question, dude. [Laughs] Thank you. Do I feel like I am overlooked? Yeah, I do feel that. I used to hate saying that because you sound jaded and disgruntled. There’s a lot of factors that go into it. It’s just convoluted with a lot of artists nowadays. I guess we live in an era where our type of music is considered alternative or underground, but outside of this American region it’s huge. I guess due to isolation and American exceptionalism we have to work a little smarter in order to stand out. Of course, with that there’s other opportunities that may have been presented to different entities. I’ve learned to appreciate my own journey. I feel like I may be overlooked and underrated, but I also feel like that’s going to change soon. We’ll see.

TRHH: On the song ‘Application, Dedication, Discipline’ you talk about working a 9-to-5 and all that comes with it. Where are you at in your life now?

RoQy TyRaiD: I do music as a full-time profession, but I don’t want to mislead anybody paying attention to this interview who may be an aspiring artist. I would definitely suggest keeping a job – it’s important. I tried going in thinking that specific avenues are going to work and reality hit me hard that I need to go and get a job. You have to be your chief financier nowadays. The concept of a traditional A&R is almost nonexistent at this point. With the economy there’s not a lot of investors that are willing to put up the suicide funds that are needed in order to get the ball rolling, so you have to do that yourself. You need a job. Myself, I had gotten to a point where I no longer needed that, thankfully. That’s a testament to my own journey. I’m not against anybody needing to work in order to further their own goals. It’s common sense.

TRHH: How did you get to that point? Is it the shows? The music sales?

RoQy TyRaiD: A multitude of avenues, but most of it revolves around consistency, persistency, and more or less treating it like a business. You have to understand that before all the creative aspects of the music business, music is a business. You have to figure out ways to creative capital, and I hate saying this because it sounds so cheesy but it’s so true, to present your brand in a way that cultivates revenue. Avenues like your shows, your merchandise, and your royalties are all the different ways in which you can pull in capital. It takes a lot of hard work and it also takes blind faith, because you get to the point where you have a schedule that no longer fits within your work schedule and hopefully by that time you have enough money that comes in from that to offset whatever you were supplementing by having a job. It took a couple of steps. I tried it more than once and I was reminded that I needed a job. Thankfully I was finally able to touch the sky and make some things move. It’s my own little small success story. People who inspired me to do that was my man, Mega Ran who was a teacher. He told me back in 2011 or 12 that he was going to discontinue his scholastic pursuits and really take this serious. That was one person who inspired me to make my own journey as well.

TRHH: Did fully viewing Hip-Hop as a business take away the fun of being creative for you?

RoQy TyRaiD: Ah man, yeah, sometimes. It depends on how much of that energy you absorb. Sometimes you have to take a break. It is overwhelming. It’s super overwhelming. That’s another thing too, you get to the point where you start to fill these roles of what you’re doing with other people who specialize in those specific tasks. It can become overwhelming. You’re dealing with multiple social media’s, you’re figuring out ways to improve your streams, you’re your own booking agent, and your own PR. Literally, everything that other people are supposed to be doing inside of a label you have to become that yourself and find time to be creative.

So after a while, doing this for so long, and momentum picking up it’s going to become a bit difficult and that could take away the fun from it. But that’s when you might need to take a little bit of a break, go on vacation, take a day or two hiatus, see a movie, or spend some time with your partner. Yes and no, because also you realize that this business that you’re engaged in his helping advance something that you love doing. There’s times where you may feel overwhelmed but in my mind I’m just this 14 year old kid leaving school on the metro bus listening to music on his Discman wondering how I can be a part of this one day. Now I have my own LLC, I’m keeping record of my revenue for tax purposes, and I’m going to flip this business into something profitable. A lot of people can’t say that they do what they love for a living, unfortunately. We pulled the right number.

TRHH: When can we expect the next album?

RoQy TyRaiD: Oohhh, stay tuned. There’s a rhyme and reason for what everybody is seeing right now. Tremors come before the big one.

Sherron Shabazz is a freelance writer with an intense passion for Hip-Hop culture. Sherron is your quintessential Hip-Hop snob, seeking to advance the future of the culture while fondly remembering its past.
View all posts by Sherron Shabazz →
This entry was posted in interview and tagged Application Dedication Discipline, Arizona, Crown Me, interview, Jim Kelly, MC4REAL, Phoenix, PLYNwcha, RoQy TyRaiD, The Culture is Back, The Dichotomy of RoQy TyRaiD. Bookmark the permalink.