Posted on September 7, 2020 by Sherron Shabazz 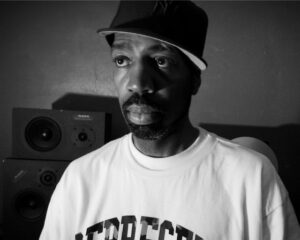 Grand Daddy I.U. has one of the dopest voices in Hip-Hop, but on his latest album you don’t hear his voice at all. The Smooth Assassin stayed behind the boards and handed the emceeing duties over to some of the all-time greats, as well as some of Hip-Hop’s future stars.

The Real Hip-Hop had the great pleasure of speaking to Grand Daddy I.U. about why he’s focusing solely on production now, the lessons he’s learned in his 30 years in Hip-Hop, and his new album, The Essence.

TRHH: Why’d you call the new album ‘The Essence‘?

Grand Daddy I.U.: Because we’re taking it back to the essence. To me it’s the original form of this shit. It done strayed away from the original sound and I wanted to get back to that sound. That’s why I called it “The Essence.”

TRHH: Why do you think Hip-Hop has strayed away from the original golden era sound?

Grand Daddy I.U.: My estimation is once the south got a hold to it, it had a different sound ‘cause they’re in a different environment. Their reality is kind of different. They changed the hard snares and shit to claps. They changed the rhythm of the hi-hats. They speed up the hi-hats to a speed that real drummers can’t even do. No disrespect, but that’s what it is. Ever since that shit became more popular than the New York sound, for whatever reason, New York artists started copying it.

TRHH: Yeah. It’s crazy. What made you decide to do a producer album right now instead of rhyming on some of these beats?

Grand Daddy I.U.: Two reasons; I’m at a point in my life where I don’t really want to rap about the same old shit. Certain shit I’m not prepared to fuckin’ give the world as far as what’s going on in my personal life. So, I’m like, “What do I spit about right now?” I was taking a break from it anyway. My heart wasn’t in it no more because the state of the game is so fucked up. I still wanted to contribute and I’ve always been a producer, so I was like, “Fuck it. I’m going to get some of these young boys that got talent, put ‘em with the vets, let them do their thing, and I’ll just do the beats.”

TRHH: How long did it take you to complete the album with all of the features?

Grand Daddy I.U.: Actually, maybe like a year and a half. The shit took longer than that to come out because the mixing and mastering shit took a long time. The shits been done for a minute. It wasn’t that hard to get the features and shit. The hard part is after – getting motherfuckers to do the video together. A lot of them are out of state right now, plus this COVID shit is going on. It’s hard to get the veterans all together to do the video. Right now, Sadat is in North Carolina. He’s shooting a part of his video and he’s gotta send me the fucking footage and we gotta mesh it with the other shit. It’s a whole process all over the place, but it’s going to get done though.

TRHH: You mentioned Sadat and the single “Politically Incorrect” has Sadat X, Ruste Juxx, and Shortee Sha on it. How did that joint come together?

Grand Daddy I.U.: When I make a beat the first thing I do is say, “Who can I hear on this shit?” When I made the beat, I thought it sounded like some shit that Sadat would kill. I sent him the track and he was like, “Yeah, aight.” We went to the studio and we had a conversation. Right after the conversation he was like, “Gimme the pen.” Pen to pad he started writing his shit and laid it down. Right after that, everybody else came in, listened to what he said, and went off of that. Ruste Juxx came and Shortee Sha came with the hook and the last verse. It always starts with the beat and who I hear on it. Once I get that first person on it, everybody else follows that. The format is already there for them.

Grand Daddy I.U.: Guess what? I made that whole album on a program. A bullshit program. On my ‘puter. That’s it. I got the MPC, I got the Maschine, I got all that shit. I didn’t use none of that. I used this one fuckin’ program called Beat Thang. It ain’t the arrow, it’s the Indian.

TRHH: “Fully Charged” is my favorite joint on the album. Fame, Digga, and Bumpy killed it, but the horns are crazy on that record. Without snitching, what genre did you sample those horns from?

TRHH: Real hard. And they all represented and killed it. Who spit your favorite verse on the album?

TRHH: They’re on a few songs. Which songs?

Grand Daddy I.U.: My favorite verse from inf is on “Cash in Abundance.” Shortee Sha on a joint called, “Dope.” The nigga said, “I’m over your head like a chandelier/Revolver in a brown paper bag like a can of beer.” I was like, “Ah shit!” His bars be slick.

TRHH: I want to go back to your first album, Smooth Assassin. That came out when I had just started high school. I played the hell out of that tape. My favorite song on that record is “Phuck ‘Em Up U.” That song always sounded like a freestyle to me. Was that written or off the dome?

Grand Daddy I.U.: Nah, it was written. Back then we didn’t call freestyles “off the dome.” Freestyles back then were just some shit that don’t have no particular theme or storyline. It’s basically just bragging and talking shit. Later on, when the backpack era came about motherfucker’s started getting it confused and calling freestyles off the top of the dome. Originally that wasn’t what it was. That was in that era a freestyle. It was just some shit – a rhyme.

TRHH: You have 30 years in the game as an artist, a writer, and a producer, what the biggest lesson you’ve learned in the Hip-Hop industry?

Grand Daddy I.U.: Don’t trust none of these motherfuckers.

TRHH: Expound on that. Why can’t your trust nobody?

Grand Daddy I.U.: First of all, motherfuckers will smile in your face and steal your publishing. And then, when you ask them about it they’re claiming they don’t know and they just made a deal to sell half of your shit. I’ve been through a lot of this shit with a lot of these motherfuckers. That’s for the executives. For the artists, them niggas is full of shit. You see them at the club like, “Yo, what’s up man! Let’s link! Let’s do some shit.” And when you call them like, “I got this beat” them niggas disappear on you. You never see me around a bunch of artists. None of that shit. I mostly stick to myself.

TRHH: Sha and inf are your artists, right?

Grand Daddy I.U.: Nah. They just talented motherfuckers that I knew. I wanted to give them a shot. I could have signed them. I didn’t wanna do that. What Im’ma do that for? If I’m trying to help you why do I have to benefit from it? That’s not really help. I did that shit specifically to bring them into the game. That’s why I linked them with vets so the project could get a look. If I just try to put them out it will be harder for people to try to notice them without a Sadat or a Rah Digga. I just wanted to give them an alley oop, man. Give them an opportunity. “Here you go, take that shit and run with it.”

TRHH: You’ve got the most scruples in the music industry, man [laughs]. Somebody not looking to get rich off of somebody else? That’s dope!

Grand Daddy I.U.: [Laughs] Not at all. I was on their ass to make sure they got their publishing all set up. I don’t want nothing. I didn’t take no publishing from nobody. Nothing! Do your shit, go head, and return the favor to somebody else. Keep the real Hip-Hop alive.

TRHH: You started in the game through Biz Mark and there were issues there. Are you guys cool now?

TRHH: So y’all worked out the money issue?

Grand Daddy I.U.: Nah, we ain’t work out no money issue. Not at all. If we had worked out the money issue we’d be cool like that. I would probably be doing some other shit with him. That shit’s old. Fuck that shit. I don’t care about it now. That shit definitely left a bad taste in my mouth for a long time.

TRHH: Who is “The Essence” album made for?

Grand Daddy I.U.: The golden era of motherfuckers that’s still looking for that sound. And for the ones that didn’t know what it’s supposed to sound like, if you never knew, now you do. That’s my motto.

Sherron Shabazz is a freelance writer with an intense passion for Hip-Hop culture. Sherron is your quintessential Hip-Hop snob, seeking to advance the future of the culture while fondly remembering its past.
View all posts by Sherron Shabazz →
This entry was posted in interview and tagged Fully Charged, Grand Daddy I.U., Grand Daddy I.U. presents The Essence, Hempstead, interview, It’s About to Go Down, Lead Pipe, Long Island, New York, P.I.M.P. (Paper is my Priority), Phuck ‘Em Up U, Politically Incorrect, Return of the Smooth Assassin, Self Made Man, Shots Fired, Smooth Assassin, Something New, Steady Flow Enterprises, Stick to the Script, The Essence. Bookmark the permalink.