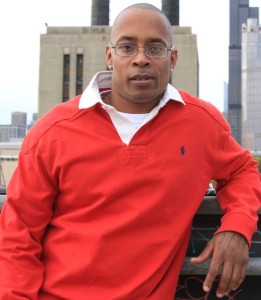 Sadat X has never left. After coming on the scene in 1990 the man born Derek Murphy has consistently blessed fans with music as a member of Brand Nubian and as a solo artist. His distinct voice, original flow, and substantive lyrics are what make X so dope. He’s created the perfect concoction that has left an indelible mark on the culture, which has contributed to his longevity. Twenty-five years after his debut Sadat X recently released his ninth full-length album and tenth solo project overall, Never Left.

Sadat X spoke to The Real Hip-Hop about his new album, Never Left, how he became a “True Wine Connoisseur”, and the prospects of a new Brand Nubian album.

TRHH: Explain the title of the new album, Never Left?

Sadat X: What it means is throughout everything that has gone on with this Hip-Hop thing I’m still here – I never left. More specifically I’m speaking in terms of New York. New York has undergone a lot of sound transformations in the last couple of years. We’ve adapted to other peoples styles and not really cultivating our own. I felt I never left, that New York sound is still the same.

TRHH: What is your opinion on the influx of New York rappers doing the Southern style?

Sadat X: I can’t knock anybody else’s hustle, but I remember New York being the home of originators and innovators. We always set the trends. It seems like now we’re conforming to different trends and we were never like that.

TRHH: Tell me about the single ‘On Fire’.

Sadat X: It’s an easy listening joint with a message. I felt that my man Cormega with his style would definitely accommodate that beat. The young boy Lanelle did the hook. It’s just something smooth but not soft.

TRHH: It seems kind of different for you.

Sadat X: Yeah, I experimented with a couple of things but I liked that beat. It also shows versatility. An MC means “Master of Ceremonies” so I’m just showing another style and form of emceeing that I can master.

TRHH: How long did it take you to complete this album because a couple of the singles on the record like ‘We in New York‘ and ‘I Know This Game‘ came out almost two years ago?

Sadat X: Well it took me a minute, man. I was working off and on so it actually took me about two years.

TRHH: During that time you’ve been involved in the wine industry. Talk a little about True Wine Connoisseurs.

Sadat X: True Wine Connoisseurs is the brainchild of myself and my partner, Will Tell. It started as a joke. In the studio one day Will had a bottle of wine and he decided to film us drinking it for some reason. We put it on the net and it went viral. We started doing episodes where we would go and get wine from the stores and review it with our crazy reviews. It got to the point where people from different wine companies started sending us wine to review. We did that for about a year or two and somebody at some point said, “If you guys are ever serious about making your own wine let me know.” We met with the people and we’ve had an actual hands-on approach with the wine as opposed to somebody just making it and slapping our label on it. We were involved in the process of selecting the grapes and the tasting processes. During that period we’ve learned a little bit about wine. Will has a job in the wind industry now. That’s basically where that came from.

Sadat X: It’s my favorite joint because that album was basically a show and prove album. We was on the firing line and we had to produce. This was the post-Puba album and we went back to the basement, back to the lab, and we did all the beats on there. This was how we were feeling at the time. That album was made out of struggle and that’s why I like that the best.

TRHH: Early on you guys got a lot of criticism for the ‘Wake Up’ video and some lyrics in ‘Punks Jump Up to Get Beat Down’. How did you guys deal with that at the time because it was pretty controversial?

Sadat X: First of all at the time we were younger so we really didn’t care about the controversy that we would face. We didn’t foresee some of the backlash that would come. Basically we were talking about every day and how we lived life. When you aren’t exposed to certain things you don’t really know about it. I wouldn’t say ignorant to it, but you don’t really know about it. For instance, when I came up I didn’t have too many dealings with people that were gay. Where I came from they were looked at as weak people and as people that were not men and were soft. I didn’t know any gay people so that was my perception of it. As you go around the world and times change and you meet people, you learn to kind of deal with people on their own merit. Sometimes your perception of things start to change.

TRHH: Definitely. What led to Grand Puba coming back in the fold for the Foundation album?

Sadat X: Everybody had did their own thing for a little while. It wasn’t like we wasn’t friends and wasn’t seeing each other. We seen each other through the whole process of everything. It was at that time that everybody was stable enough and free of projects that we said let’s get together and put this thing out.

TRHH: What’s the album after In God We Trust?

TRHH: Yeah! That’s the one with ‘Alladat’ on it, right? With Busta?

TRHH: I always wanted to ask you about that song because it was like a solo Sadat record on a Brand Nubian album. How did that joint come together?

TRHH: [Laughs] I still bump that to this day.

TRHH: Lord Jamar has been all over VladTV for a while now making some controversial statements. What do you make of Jamar voicing his opinions on VladTV and what do you say to those that think Vlad is exploiting Jamar?

Sadat X: If you know anything about Jamar you know that he’s not going to allow anybody to exploit him. He’s much too swift mentally for that. He’s just using this as a platform to speak his views and how he feels. One thing about Jamar as opposed to certain people that go on rants and tirades, if he does go on a tirade you can believe that he’s going to have some factual-ness behind it. Whether you choose to take it or not he’s not going to make a blind, mindless speech. It’s going to be based on some type of facts. That’s how I feel about the brother. He’s doing what he wants to do. He’s a grown man and he can handle any backlash that comes with it. As you see, a lot of people are offended by it but even more are following him.

TRHH: Will we ever hear another Brand Nubian album?

TRHH: Why is Never Left an important album for 2015?

Sadat X: When you have certain musical genres such as folk music that go back to the revolutionary days or classical with different compositions like Mozart and Beethoven 2-300 years ago, rap is still defining itself. If they’re giving rap an age cap of at the most 50, in terms of music it’s still in its infancy. Now it’s growing up a little bit and the people that grew up with it, they need to have an outlet, too. No, I’m not going to listen to the same type of rap that my 16-year old nephew listens to. I may not even listen to the stuff that my 23-year old daughter listens to. Me at 45-years old, I need something to listen to. That’s where I feel Never Left comes in. This album is an album for people that pay bills, people that are raising children, people that may have grandchildren, and people that are going through ups and downs in relationships. I think there has been a void in that area. People always say, “Don’t you make your music for everybody?” Yes I do make it for everybody and if I do get some youngsters or new fans that want to listen to me and know who Sadat X is that’s more than great. I feel at this point there is a lane for me doing grown folk music because I know enough grown folk out here that want it, so that’s what I tried to make it as.

Sherron Shabazz is a freelance writer with an intense passion for Hip-Hop culture. Sherron is your quintessential Hip-Hop snob, seeking to advance the future of the culture while fondly remembering its past.
View all posts by Sherron Shabazz →
This entry was posted in interview and tagged Brand Nubian, interview, Never Left, On Fire, Sadat X, True Wine Connoisseurs. Bookmark the permalink.