Posted on September 11, 2017 by Sherron Shabazz 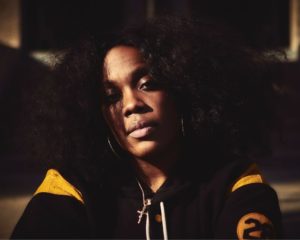 In early 2017 Los Angeles emcee Ill Camille released her sophomore album, Heirloom. The album is an impassioned and cohesive piece of art in which Camille bares her soul with exceptional emceeing. Heirloom is easily one of the best releases of 2017.

The Real Hip-Hop spoke to Ill Camille about her purpose for picking up the mic, why Europe embraces Hip-Hop acts differently, and her latest album, Heirloom.

TRHH: Why did you title the album Heirloom?

Ill Camille: Well, that wasn’t the first name for the album. I changed the name to Heirloom close to the time that we actually released it. I was initially going to roll with the title “Illustrated B-sides.” In 2012 I dropped an album called “Illustrated” so I felt like this album was the B-side to that. Battlecat hit me up once he started hearing things in completion and he was like, “I think this album is a little bit too personal and introspective for you to give it such a mixtape sounding name. I encourage you to sit down, take a couple days and think about making a name change.” Literally the next day I just came up with. It was random and it just stuck and felt right, so we rolled with that.

TRHH: How was this album different from Illustrated?

Ill Camille: It’s been five years and in that amount of time so many things have happened. I’ve grown a lot just as a person. My communication is different. The way I express myself is a little bit deeper and I’m a little bit more transparent. It’s going to come out in the music for sure. I am who I am, but I felt like there was a maturity there that wasn’t present on the other album.

TRHH: What inspired the song ‘Home’?

Ill Camille: Georgia Anne had sent me a batch of beats a long time ago and that was one of the ones I always liked, but I couldn’t think of anything. Right before the album was getting done there was this need for me to travel. I just wanted to get out and explore. I had been in L.A. so long that I felt stifled and wanted to get out. I was getting all these emails from people from different countries telling me how they listen to me and I’m like, “Damn, I never even been to your country and you’re taking me in like we know each other.” The saying “home is where the heart is” I feel like a little piece of my heart is everywhere in places I’ve never been. That’s why I did that song. Damani Nkosi, who is the feature on the song, he always travels. That’s what he’s known in my city for doing – he’s a traveler. He told me, “You’re going to get this need to travel and once you travel it’s going to come across in your music,” so I wanted to do a song foreshadowing me traveling eventually.

TRHH: Have you toured outside of the country yet?

Ill Camille: I just got back from a month long tour. I was in Berlin for a while, I was in London, I was in Stuttgart, and I was in Amsterdam.

TRHH: What did you think of Europe?

TRHH: The word that comes to mind when I listen to Heirloom is “warm”
because it just feels warm and soulful. How would you describe Heirloom?

Ill Camille: Heartfelt. That’s where I try to do music from first is the heart. Everybody’s got one so I feel like if you touch the core of people it’s going to go. If I talk to you on that level then we’re really having a conversation and that’s all music is. I think my music is heartfelt, whether I’m talking about something positive or negative, it’s coming from that place first.

TRHH: On the song ‘Almost There’ you say, “So much dialogue about balling and currency/That being a broke Negro can be discouraging.” How do you think the love of money in Hip-Hop has affected the culture?

Ill Camille: Man, that’s like 80 percent of the conversation it seems like. That’s the focus. Let me say this, to an extent I almost understand it. For black people that’s where we find a lot of our value is in money, because every day we’re devalued. As soon as we acquire some wealth or anything of that nature we sort of exploit it because that’s the way that we feel good. In that way I understand it, but when that becomes the focal point and the end goal it just takes the “Hip-Hop” out of Hip-Hop to me. I’m just trying to get back to the point where we’re storytelling, talking, dialoguing, and having a good time. I want to hear that stuff too on a record. I want to be able to understand you on your record, too. I just feel like so much money talk muddies everything.

TRHH: The song ‘Renewed’ was very touching and relatable. Was it difficult for you to write and record that song?

Ill Camille: Yes. That song was recorded in 2014. I did it one time and there was a part where I was writing in the booth as I was going along I just felt like however it came out was how it was going to come out. It was difficult to do it in the first place. To even think about me having to put those things down on paper for me made them real. I didn’t want to talk about it but I had to talk about it, because that was the only way I was going to heal from it. I did it in 2014 — that was the first take. I never re-recorded it. By the time the album was coming out that was the last song we got to because I couldn’t really listen to it either. It’s still hard for me to listen to. We had to listen to it to check the levels and get it sonically intact. We just added music around it. That was a hard song to do.

TRHH: I read an interview you did where you touched on questioning if you should even keep pursuing emceeing. How do you feel now about your standing in Hip-Hop?

Ill Camille: I feel like that’s my job. I don’t control how long I’m going to be an emcee. For right now while I have momentum and God is putting me in places that I’ve never been and getting my music in places where it’s never been, that’s my job. I have to fulfill my duties until I’m assigned otherwise. That’s all this is, is an assignment. It’s a responsibility to be an emcee. I gotta walk in it and I gotta own it, so that’s just what I’m doing. Right now nothing else even feels remotely right or natural to me, so I know this is what I’m supposed to do. Before I didn’t have confidence in myself like that, I didn’t have confidence in my support system either, and I didn’t have confidence in God that this was something that I should be doing. When my mentality about all of those things changed and I became more assured you start seeing how it’s actually supposed to play out, and it’s playing out.

TRHH: What’s next up for Ill Camille?

Ill Camille: I’m just going to continue to do a lot of shows. I got some more videos I’m about to drop to keep the Heirloom movement pushing forward. I made the album 16 tracks for a reason, because I wanted it to live for a while. That’s the focus but I’ve already started working on a couple of other projects, two of them being collaborative projects with two of my favorite producers. That’s what’s going on right now and shoot, that’s it!

Sherron Shabazz is a freelance writer with an intense passion for Hip-Hop culture. Sherron is your quintessential Hip-Hop snob, seeking to advance the future of the culture while fondly remembering its past.
View all posts by Sherron Shabazz →
This entry was posted in interview and tagged Almost There, California, Heirloom, Home, Ill Camille, Illustrated, interview, Jakarta Records, Los Angeles, Renewed. Bookmark the permalink.