Posted on September 4, 2017 by Sherron Shabazz 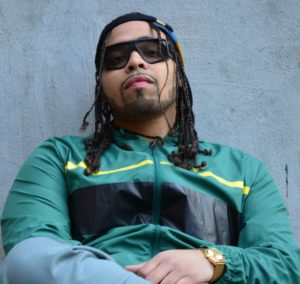 It takes bravery and skill to attempt to walk in the shoes of a legend – especially when that legend is your father. Chris Rivers has done just that. The 23-year old son of the late, great Big Pun has blazed his own trail in Hip-Hop while doing his father proud.

Chris Rivers is one of the most respected young emcees in Hip-Hop. He’s shared stages and mics with some of the games greats and has mastered the art of freestyling. Rivers can also get it done on wax and his latest release “Delorean” is proof of that.

The Real Hip-Hop spoke to Chris Rivers about living up to the legacy of his father Big Pun, what it takes to maintain happiness, and his new album, Delorean.

Chris Rivers: I’m pretty into sci-fi and I’m 23 but I do have an old soul. I’m into new stuff as well and that’s what this project has. It’s got those old school flows, that passion, and that delivery but it also has that new school style and fun-ness to it. The ‘Back to the Future’ reference made sense when you’re bringing the past to the future musically as well. Plus, I just geeked out a little bit with it.

TRHH: The single ‘Lord Knows’ has a great vibe and a positive message. What inspired you to write that song?

Chris Rivers: That one was pretty dope. It was 2Pac inspired. If you listen to it, it has a bunch of 2Pac song references. We knew the movie was coming out soon and the anniversary and all of that, so it was definitely inspired by him. I would say the most specific song that the whole song was inspired by was ‘Brenda’s Got a Baby’ but we wanted to put a positive twist on it. That’s why we have more of that uplifting feel to it. Me personally, I grew up without a father so I got to see my mom as a single mother struggle with kids and I got to see my sister do the same thing. I definitely wanted to give a story from the perspective of something that I’ve been through and pay homage to 2Pac at the same time.

TRHH: How old were you when your father passed?

Chris Rivers: I was 6 years old.

TRHH: Do you have any memories of your father?

Chris Rivers: Yeah, not too many because I was young when he passed. I do remember situational stuff. I remember being in the studio a lot and playing in the arcade. We lived in the studio for like months at a time while he was recording. We were in a lot of hotels. I remember he was a prankster. He would pour water on anyone who would fall asleep. We’d hear a gunshot downstairs and run down there and a person would be laying there with ketchup on their head. He had a sick sense of humor. I remember little things but not too much.

TRHH: N.O.R.E told me a story that he came by the house to see Pun one day and your dad had you and your sister boxing…

Chris Rivers: Yep. He used to have us boxing. He trained my older sister so she had hands. He didn’t train me because I was a boy and he figured I was a little tougher. He threw me in there to fight her and I was punching like a 3 year old. I was throwing mad punches and out of nowhere she would catch me with a crazy haymaker or a combo that he taught her and I’d get knocked down. I probably got knocked out three times before I learned how to duck. I definitely learned the hard way but I still enjoy boxing to this day. He left an impact on us with that.

TRHH: Did you feel any added pressure getting into Hip-Hop being the son of a lyrical giant?

Chris Rivers: Oh yeah, definitely. In the beginning I would say I did more so than I do now. I started right after high school. I was 17 at the time and that’s an age where you discover who you are as a person and as an artist. I definitely felt like I needed to live up to his name, his legacy and the pressure of what people would expect of me, because I am going to be held at a higher caliber. Along the path of my career I established myself as an artist, I’ve learned myself as a person, and I’m more comfortable with who I am and my artistry. I don’t feel as much pressure to live up to his name, I more feel pressure to create more for myself, craft my own legacy, and live up to my own standards. I don’t feel as much pressure to be like him or live up to people’s expectations of what they think I should be because I’m his son. I’m more comfortable now, so I don’t really feel it too much.

TRHH: ‘Old Thing Back’ is really creative song.  As a young emcee in the game do you think it’s important for you and your peers to be knowledgeable about the music that came before you?

Chris Rivers: I appreciate that. To a degree. I’m not saying you need to quote every song from the 80s or 90s, but I do think it’s important to know where the music that you got inspired by came from. It helps you to get a perspective and realize who was successful in that time. Certain music is timeless so if you want to be significant and still known 10-20-30 years from now you gotta see how they did it and learn from the past. A lot people respect you a little more if you do know a little bit – the real Hip-Hop heads. I do think it’s important.

TRHH: The Abundance skit stuck out to me. It’s an astute observation from such a young man. Do you believe that happiness is sustainable?

Chris Rivers: I do think a general happiness is sustainable, like overall how you feel in life. To actually sustain it that’s what Buddhist Monks do. They really practice peace and peace brings happiness. With peace there is no chaos, and chaos brings a lack of happiness. I do think happiness and love is just an emotion that is induced by certain things. When you have more control of how you feel and how you react to the world around you, you can sustain it for longer periods and have a better overall emotional state.

I don’t think the actual raw hype of happiness is sustainable, because as human beings we always seek bigger things. Even if I maintain a level of happiness that works for me right now I’ll get used to that level of happiness and try to get one that’s even more than that to satisfy the current state of happiness that I have. I think ultimately, perspective wise the way humans are I don’t think we can continuously hold on to it, but I think we can put ourselves in places where we overall feel better than we’d like right now.

TRHH: Do you have a favorite song on Delorean?

Chris Rivers: I do like some of the fun ones like ‘Bag’ and ‘I Got Too Much’ but I really like the intro and outro a lot. I like ‘Delorean’ a lot and ‘Brightness’ a whole lot too. I would say one of them.

TRHH: What do you hope to achieve with Delorean?

Chris Rivers: I really want people to finally see me more for who I actually am. I feel like a lot throughout my career I’ve been pushed and pulled and kind of unsure of the steps I wanted to take. I’m still not at my maximum potential, but I feel like this is the most unique project and I feel like it’s going to be received well. I hope to extend my demographic and have a bigger fan base through this. I really want to get the message out there of who I am and I think people will receive it – I think it’s going to be good.

Sherron Shabazz is a freelance writer with an intense passion for Hip-Hop culture. Sherron is your quintessential Hip-Hop snob, seeking to advance the future of the culture while fondly remembering its past.
View all posts by Sherron Shabazz →
This entry was posted in interview and tagged Abundance, Big Pun, Bronx, Chris Rivers, Delorean, interview, Lord Knows, New York, Old Thing Back, That’s Hip Hop. Bookmark the permalink.