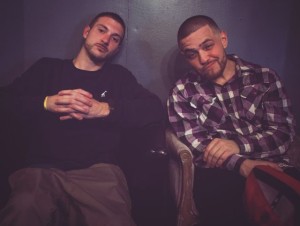 Two members of the Pacific Northwest collective Sandpeople, Illmaculate and OnlyOne have recorded together for years. Each emcee appeared on each other’s solo projects in addition to group releases, but have never released an album together – now they have.

Illmaculate and OnlyOne spoke to The Real Hip-Hop about the Portland rap scene, their penchant for intoxicants, and their new album, Only & Ill.

TRHH: Why’d it take so long for you guys to release a full-length album?

Illmaculate: It’s been in the works for a minute. We put out several singles, we had a weekly going, but at the end of the day we just wanted it to be right. We weren’t quite happy with it until we got the album that we have now. We went through four different drafts of it over the last year or two. It’s good to finally put it out.

TRHH: What did you need to hear to know it was right?

Illmaculate: There was a couple times were we thought we had it, then we just sat on it for a second, listened to it and tried to look at it objectively. There was just something missing. Once we had this batch of songs and we whittled a couple down, there were bangers that we loved but it just didn’t fit within the context of the record. Once we put these songs together in a playlist and bumped them front to back, that was it, it was ready to go.

TRHH: The new single “Can’t Take That Away” is a pro-drugs song to say the least. What specifically was the inspiration behind that song?

OnlyOne: It’s definitely a drug anthem. The inspiration is self-explanatory. Definitely hallucinogens, marijuana, and alcohol played a big part in the making of that song. Also the past that we know of with our friends and family and everybody else. The drug culture is a big part of our music – the positives and negatives of it. We felt it important to make a song that empowered both the positives and negatives of drugs.

TRHH: Have you guys taken advantage of that?

Illmaculate: There’s not like recreational facilities yet. They’re still getting the legislation right. I think by January it will be fully ready to go. We both take advantage of the medicinal use as far as having cards and going to the dispensaries. Shops haven’t opened up yet as far as being able to go in and buy some recreationally.

Illmaculate: The tour has been great. It’s been fun connecting and finally performing some new material. As far as the origin of Angel’s Bathwater, it’s basically Jameson’s Irish Whiskey. Goldini Bagwell who is on the tour coined that a few years back. We have a lot of references in our songs to angel’s bathwater and it’s really just referencing Jameson’s Irish Whiskey which is our unofficial sponsor of this tour [laughs].

TRHH: I spoke to Myke Bogan a few months ago and he said the Portland Hip-Hop scene doesn’t get the recognition it deserves. Would you agree with that statement?

Illmaculate: Yeah, I would agree as far as talent. There is an abundance of talent – it’s crazy. It’s pretty incredible when I think of my peers from Portland. I could name ‘em but I’d definitely forget someone and get heat about it. I’ve been a lot of places and I always come back and say “We have some of the best emcees out here, period.” I think the market and the economy isn’t there yet and that’s where I think the lack of recognition comes from. That’s on the side of fans, but it’s also on the side of industry and money and investors that are willing to invest in building a long sustaining culture of Hip-Hop in Portland. It also kind of gets stifled by the city to some degree. It caught some recognition on the negative side from Buzz Feed and Vice articles. I’d put the pure raw talent in Portland against any city in the nation to be honest — pound for pound.

Illmaculate: I stand fully behind it, man.

TRHH: Battle rappers get tagged with not being able to make good songs. How did you overcome that to excel in song writing?

Illmaculate: To be honest I was writing raps for years before I ever freestyled or battled. I was in the studio for 2-3 years before I ever got involved in battle rap. I was a part of groups and learned song structure. That was there first — that was my first love. I feel like a lot of people, especially battle rappers, get involved with just freestlying at parties and their homies say they’re pretty good when they’re drunk so they think they should make songs. That was never me. I took writing raps, and recording songs seriously first before ever delving into freestyling and battling. I don’t look at myself as a battle rapper as much as a lyricist, an emcee, and an artist that happens to battle. That’s where the difference is.

TRHH: I have to ask, who is the girl in the “Gattaca” video?

OnlyOne: That’s just a model that the director of the video, Kyle Gray chose.

Illmaculate: Yeah, I miss her.

OnlyOne: She’s just a model though. No we didn’t have sex with her during the video shoot. I’ve gotten all these questions. Young kids are like, “You must know that model!”

TRHH: It’s unfortunate you didn’t have sex with her.

OnlyOne: [Laughs] It’s disappointing. Every time I watch the video I’m disappointed. What could I have done better?

Illmaculate: If we could go back…

OnlyOne: If I could go back I wouldn’t wear the gas mask.

TRHH: The song “Audiobiography” has some personal information in it regarding your families. Were you apprehensive at all about releasing that song?

OnlyOne: Ill wasn’t but I was. It was actually my idea and my concept. I came to the Chase beat and had been thinking about doing an audiobiography song for a while. When I wrote it and laid it down I knew I had to get Ill on it. Once the song was done we knew it was a keeper and wanted to put it out. Since marinating on it I’ve actually been apprehensive to perform it for smaller crowds or if I don’t feel the venue is right. It’s just a really personal song. We knew we were going to put it out as soon as we made it.

Illmaculate: As far as the content of it being personal and being apprehensive about putting it out, that was never in the equation because this is what we do. This is our art and our music. That should be reflected in the music. Like Only said, once it was done we knew it was going on the album and it would be a pivotal song on the record.

TRHH: Who is the Only & Ill album for?

Illmaculate: I think the album is made for anybody who appreciates raw lyricism. I feel like everything is in there. People always say, “There’s something in there for everyone!” I think from the standpoint of the people who appreciate substance, questioning authority, but also partying, smoking, having a good time, and appreciating dope lyrics, that’s who I think this is for. I think most people fit into that and would fuck with the record if it was put in front of them.

OnlyOne: Adding on to that, the record is also a really good sign of the times. If you pay attention to the time that we’re in, in Hip-Hop and in our society there are a lot of younger kids that are starting to rap. Rap is still really young and exploding in a lot of circles that it wasn’t in decades ago. In our album you can see a culmination of a new kind of Hip-Hop that’s political and is this and that. As long as the beats are there we’re happy with it. We’re always trying to push to a new level. I think the record is a good sign of where the times are at as far as making music that is more tech in the rap aspect for people that do rap, and also for the people that do just listen to it still.

Sherron Shabazz is a freelance writer with an intense passion for Hip-Hop culture. Sherron is your quintessential Hip-Hop snob, seeking to advance the future of the culture while fondly remembering its past.
View all posts by Sherron Shabazz →
This entry was posted in interview and tagged Angel’s Bathwater tour, Audiobiography, Can’t Take That Away, Gattaca, Illmaculate, Illmaculate & OnlyOne, interview, Only & Ill, OnlyOne, Portland, Sandpeople. Bookmark the permalink.