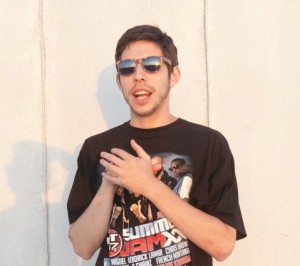 New Jersey emcee GDP has joined forces with producer The Wrong Address for a 7-song EP called Holla. Holla is a release that chronicles the emotional ups and downs of a romantic break-up. GDP maintains his normally edgy rhyme style while touching on sensitive topics throughout the release.

GDP is currently on the road throughout the East Coast on his Holla tour with dates scheduled in cities like Toronto, Boston, Philadelphia, and Brooklyn, New York.

GDP spoke to the The Real Hip-Hop about working with The Wrong Address, the inspiration and tone of his rhymes, and his new release, Holla.

GDP: The dude I made the record with, Wrong Address, a mutual friend of ours has a tattoo parlor in Brooklyn. We were over there getting drunk one night and were like, yo, let’s tattoo each other! Wrong Address has tattooed some people before so it was like let’s fuckin’ do it. If you bought the vinyl you’ll see on side A it’s a picture of a tattoo and on side B it’s a picture of a similar tattoo. It’s an envelope that says ‘Holla’. We tattooed each other and we had already been making the record and it became this inside joke like, holla, whatever. One day I was like, “We should just call it Holla. It’s the most inappropriate name for this record but somehow it just works.” It started with that and I had the idea to make the vinyl sticker a picture of each one of our tattoos. It’s a symbol of friendship. The best friend’s club or something [laughs]. It has absolutely nothing to do with anything.

TRHH: How is this release different from Useless Eaters?

GDP: Totally different subject matter, it sounds lot different, totally different producer. It’s still GDP I’m just talking about some different shit. I guess dark love songs would be the quick and easy way to summarize it. Useless Eaters was reckless abandonment through social commentary and some wild out shit. People say the production was experimental, I wouldn’t say experimental but it’s more like some sounds going on that weren’t in rap songs 10-20 years ago.

TRHH: How’d you end up working with The Wrong Address?

GDP: He’s a buddy of mine. Most of the producers I’ve ever worked with have been friends. Wrong Address is a buddy. We started hanging out, he sent me some beats, and we just rocked with it. I was kind of going through some shit and it really worked out this time. It was sick—excellent.

TRHH: Your sound is different on each release. How would you classify the GDP sound?

GDP: An homage to the past and a look into the future [laughs]. I don’t really worry how I classify my sound I just want it to be good. If the beat and the mood is right I want it to be quality. My sound is a certain standard of quality.

GDP: I remember being really young and seeing 2Pac videos. I was into the whole New York sound–Big L, Diggin’ in the Crates, Cam’ron, Slick Rick, and Wu-Tang. Also more abstract stuff. I listen to a lot of punk rock music also. It’s almost neck and neck. They were so close in all sorts of ways even though they were different people from different places. I got a cool crash course in both and rocked with it.

TRHH: What inspired the song ‘Friends that Fuck’?

TRHH: Your rhymes have a cynical tone to them to me, would you say that’s an accurate assessment?

TRHH: How did you develop that style? Is that just your personality or do write with that aim in mind?

GDP: I am a product of everything. Everyone is like a fucking sponge. I’ve always been interested in different sorts of things that maybe give me an edge over other rappers or people involved in this shit. I have different sorts of influences that I was able parlay in ways that maybe other dudes didn’t even know existed. Although, I feel like it’s a new day in Hip-Hop. Abstract wild shit is becoming commonplace. If you listen to the radio you’ll hear stuff and be like, “Wow, that’s interesting.”

TRHH: What’s next up for GDP?

GDP: So much, man. Holla is literally like the tip of the fucking iceberg. I’m on tour for like three weeks. Me and a producer named Space Jesus just did a record together called Hash Money [#$], hashtag, dollar sign is the symbol. We just finished mixing the record at Strange Weather Studios in Brooklyn. We’re going to be dropping the record on a label I’m starting called Smokers Cough. I’m going to be releasing a ton of other people’s music. I’m dropping a solo record after that called Permanent Vocation. I have a ton of other cool collaborations. I’ve been making friendly with some other cats that I haven’t had the chance to work with before. I’ve been bumping heads with anybody that I feel like is doing something interesting. It’s been cool to be able to do that. Seek respect from those you respect, you know?

Sherron Shabazz is a freelance writer with an intense passion for Hip-Hop culture. Sherron is your quintessential Hip-Hop snob, seeking to advance the future of the culture while fondly remembering its past.
View all posts by Sherron Shabazz →
This entry was posted in interview and tagged Friends that Fuck, GDP, Holla, interview, The Wrong Address, Useless Eaters. Bookmark the permalink.