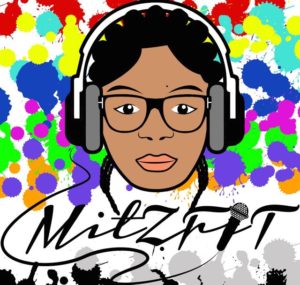 Social media is a unique thing — it connects us all. The people you can encounter and the words you may read can either be flat out ugly or extremely beautiful. Quite honestly, beautiful incidents are a rarity in cyberspace these days, but when they do occur the feeling is refreshing.

Thanks to Twitter I was able to connect with a female emcee from across the pond by the name of MitZfit. A click on her SoundCloud page immediately blew me away. Her voice, her flow, and her lyrics were all striking. She rhymed over industry beats from the likes of Kev Brown, 9th Wonder, Tom Misch, and DJ Jazzy Jeff and sounded right at home.

During a trip to London I had the opportunity to meet MitZfit. She showed me around her hood in the Brixton district of London and we chopped it up about UK Hip-Hop, her musical inspirations, and her goals in the music business.

TRHH: How did you first get into Hip-Hop?

MitZfit: I’ve always grown up around music. I grew up in an era where I was listening to a lot of R&B. I was born in the 80s and grew up in the 90s. In the 90s R&B music was really in but it was heavily influenced by Hip-Hop. I was always listening to R&B. My mom loved R&B music so that’s what I grew up listening to. Because of the Hip-Hop influence you had a lot of R&B tracks featuring a lot of rappers. That’s how I got into Hip-Hop and learned to rap, hearing the rap verse on the R&B track.

TRHH: When did you start rapping?

MitZfit: I started rapping when I was like 6 years old. It’s crazy, I know.

TRHH: What were you rapping about at six?

MitZfit: I was rapping about getting sent to bed! No, I’m only joking [laughs]. I learned to rap because my mom bought the TLC album Crazy, Sexy, Cool. I loved the album. I’m a big fan of TLC. They showed me what it was like to be a female. They were like big sisters to me watching them on screen. I loved Left Eye, I thought she was so dope. Obviously when that album came out I learned it back to front, page to page I studied the booklet. I learned all of Left Eye’s raps. That’s how I learned to rap, memorizing Left Eye’s verses. I was six, I didn’t think it was what I was going to do in life [laughs]. I was just loving music. That was how I learned how to rap.

TRHH: Who are some of the emcees that influenced you?

MitZfit: I used to listen to a lot of Will Smith growing up, I’m not going to lie. Queen Latifah – I listened to her a lot. Missy is someone I grew up on as well – I love Missy Elliott. MC Lyte here and there. It was weird for me because if I’m being honest I’m not going to sit here and try to reel off all these rappers that I know. R&B music taught me how to rap and that’s real – that’s honest. Any rapper that I was influenced by it was because I heard them on an R&B track and I learned their verse. I couldn’t tell you the names off the top of my head. I mentioned a few because they had albums out. I learned about Mase because he was on a Mary J. Blige album.

TRHH: How did you come up with the name “MitZfit?”

MitZfit: It just came to me one day. I used to call myself “RV.” That’s just the initials of my first and second name. One day my sister was like, “Rochelle, you can’t call yourself RV!” I uploaded one of my songs to YouTube way back in the day under RV and my sister said, “How do you expect someone to find you because when I typed in ‘RV’ in YouTube it came up with RV trucks?” [Laughs] She was like, “You’ve got to think about your name,” and I said, “You know what, you’re right. In the right time it will come.” And one day it just came to me. I don’t remember when or where, but it did. I guess I was in a space in my life where I was trying to figure out my place in society and within the world.

It just dawned on me that I don’t fit it in anywhere. You can’t put me in a box. You can’t define what I am or who I am. There’s a term where they say, “I’m trying to put my finger on it, but I don’t know what it is.” With me I’m a misfit and it’s not a negative thing, it’s a positive thing. I don’t fit into crowds with people, I’d rather do my own thing. I’m a misfit. I’m different from the status quo. I’m always outside of the box. I don’t agree with following the crowd and doing what everyone else is doing or talking about the same thing everyone else is talking about. I’m just me. People will look at me and ask where do I fit in – I don’t. You can’t place me with one group of people because I’m just a misfit.

TRHH: What exactly makes you a misfit? Why don’t you fit in? Give me an example.

MitZfit: I mean, there is one, for the record [laughs]. There is one but it’s very underground. It doesn’t really get the recognition that it deserves. London does have a lot of Hip-Hop artists that have done and are doing their thing right now. We’ve got Little Simz, she’s dope. I love her. I’ve been to a couple of her concerts. She’s doing her thing right now. The UK Hip-Hop scene is hard to define if we have a “Hip-Hop” scene because Grime is classified as Hip-Hop and Hip-Hop is classified as Grime in the UK. So you’ve got emcees that are spitting Grime but are considered Hip-Hop. It’s just so hard to define and no two are the same. London is not very strong on the specifics of Hip-Hop. Everyone just kind of throws it in the bag and says, “Yeah, they’re rapping on the mic so let’s just call it Hip-Hop,” or “Let’s just call it Grime.”

TRHH: People just throw it all together. What inspired the song “Away From Me”?

MitZfit: [Laughs] I just wanted to get away from me. No, I guess I was just having one of those days. Life inspired me to write ‘Away From Me’! A lot of things had been happening within the world. If you listen to the track you notice I say, “How do you expect people to put their head up/ When they keep the lead up,” In Flint those things were happening and it was like, even though I’m over here in London it effects me because how can these things go on and no one not do nothing about it? How is that even allowed? As a black person living in London I’ve got my own struggles and sometimes it just gets too much. I can’t handle it.

To hear some fuckery going on in another part of the world where people can’t even get water, water, the most basic resource that humans need. That’s what’s happening and that caused me to write that sometimes I feel like I just want to get away. I’m trying to get away from me. If you listen to the chorus it’s like, “You wanna get away? Come over here, let’s smoke this weed, come, let’s escape.” Sometimes we can’t get away how we want to so we turn to weed to escape in that moment.

MitZfit: Or whatever else. Whatever rocks your boat that that moment.

TRHH: In your music you’re open about your sexuality, which is not very common in Hip-Hop. Why is it important to express that side of yourself and did you ever worry that it might hurt you in any way?

MitZfit: See the thing is with me is it’s not important for me to express my sexuality. I haven’t made it a point go out and write these songs to prove that I like women or whatever. It’s just me writing about me. I’m just being me. It’s me living my life. I can only write about me and what I’m doing. If I’m going to be open with that, then I’m going to be open with it. It hasn’t caused any problems and I would hope that it doesn’t. I’m hoping that the people don’t focus on my sexuality, but rather what I’m talking about. Sexuality is just a small part of us. It’s not supposed to take up everything. I don’t think it’s necessarily important. I haven’t thought that it’s going to do me any damage in any type of way, and if it does then it’s dumb ‘cause it shouldn’t. It is what it is.

TRHH: What are your goals as an artist?

MitZfit: I wanna put out good music and continue to do that. I’m not doing this for fame or for the money. I hate fame [laughs]. I’ve seen what fame does to people. It’s not a nice thing. Obviously I want to be successful financially — if I can be that’s a blessing. My goals are to keep pushing out good music and be continuous with it. To have longevity and being known for an artist that has continued to put out quality material. Each time I release something for it to have meaning. My goals are for someone in another part of the world to hear my music and feel inspired. That’s my goal and it’s happening already. In a sense I am achieving that goal and it feels wonderful to know that someone else in another part of the world, a completely different time zone, is listening to what I’m saying and can relate to it and can also be inspired or empowered from it. That means a lot to me.

Sherron Shabazz is a freelance writer with an intense passion for Hip-Hop culture. Sherron is your quintessential Hip-Hop snob, seeking to advance the future of the culture while fondly remembering its past.
View all posts by Sherron Shabazz →
This entry was posted in interview and tagged Away From Me, Brixton, England, interview, London, MitZfit, UK, United Kingdom. Bookmark the permalink.