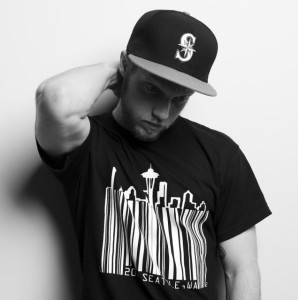 For the first three years of his career Seattle emcee Nick Weaver blessed fans with a multitude of music. While briefly residing in Los Angeles Weaver dropped mixtapes, EP’s, and collaboration projects leading up to the release of his 2013 full-length debut, Day One, None.

Since then Weaver has laid low on the music front to get some real life issues in order. He returned to his original habitat in the Pacific Northwest, which rekindled a fire that flickered in 2014.

Nick Weaver started off 2015 properly with the January 6 release of his free 6-track EP titled “Yardwork”. The EP is an ode to becoming a “grown ass man” that is produced by Weaver and Hilsyde and features appearances by Nige Hood and YC The Cynic.

The Real Hip-Hop spoke to Nick Weaver about the adjustments of becoming a full-fledged adult, his foray into production, and his new EP, Yardwork.

TRHH: Explain the title of the new EP, Yardwork.

Nick Weaver: It’s basically talking about the struggles of getting older, growing up, and becoming more of an adult. That’s the central theme. A lot of the stuff I talk about on the album is getting closer to my family again and figuring out what’s important and what’s not. The other part of that is life is like a yard – the more you tend to it and deal with your issues, problems, and stuff you’ve gotta resolve, the better it’s going to look in the end. That was the other part, putting in the yard work to make everything better than it originally was.

TRHH: How old are you, man?

TRHH: I’m 38. It’s usually around the age of 30 that you start feeling enlightened a little bit. Do you feel like life is more serious for you now?

Nick Weaver: Yeah, definitely. Over the last couple of years that’s where it went for personal reasons and people around me. It’s all part of getting older I think.

TRHH: It definitely is. For me it was scary. I really didn’t know why but after a while I was fine. My life went from being fun to a “now I have to plan for retirement” type of thing [laughs].

Nick Weaver: For sure [laughs].

TRHH: What made you go from where you were to needing to spend more time with your family?

Nick Weaver: It’s been a couple things. I was in L.A. for a while and really working hard on music and over the last couple years my dad had gotten sick. I was coming home a lot to see him. Fortunately he’s doing really well right now and everything is good. It should never be something like that to drive you to focus more time and attention on your family, but sometimes that’s just how it is. That was a big driving force more than anything.

TRHH: How is Yardwork different from ‘Day One, None’?

Nick Weaver: The last album I was really trying to for a more accessible sound. I handpicked all these beats from all these different producers that had a sound that I thought anyone who turned it on would instantly start vibing to it even if they didn’t like Hip-Hop or were older or younger. Over the last year I started teaching myself how to make beats and make everything on my own. I did that and worked with my producer in L.A., Hilsyde and he pimped them out and made them sound really, really pro. There is not necessarily one track that people would throw on at a party or that type of thing. It’s very real, very upfront, there are only two guest features and they’re rappers – there are no singers on it. It’s pretty much just me on it. In that regard it’s more stripped down.

TRHH: What beat making equipment are you using?

Nick Weaver: I run Logic Pro and I run a 25 key midi. It’s got a built-in drum pad into it – like an 8 pad MPC. I would make a skeleton of the beat and take them to Hilsyde and he would flip ‘em. He uses a big Korg Triton and another keyboard that I’m not familiar with and he would build on top of it and make it sound much larger.

Nick Weaver: Growing up Nas, Biggie, Jay-Z, Eminem – those are my big 4. Those are the ones that I was fixated on. When I was really little between the ages of 7-to-10 and not really buying my own music yet my big brother had every kind of music under the sun. He would play the old school Ice-T, Run-DMC, and Snoop Dogg. I always listened to it when he was in the car and I liked it. When I could make the choice to listen to my own music it was dominated by that Bad Boy era [laughs]. I got into Puff Daddy and that quickly got me into Jay-Z, Biggie, Wu-Tang, Nas and Eminem.

Nick Weaver: Yeah, I know, for sure. My friends always clown me and say I have no love for 2Pac or anybody west coast. I do but I grew up obsessed with the east coast sound. I don’t know what it was. I was way more drawn to the grimy pianos and the way the drums were. I love west coast rap but something about the east coast sound stuck to me.

Nick Weaver: It’s interesting because in a way I’m a little bit of an outsider on the Seattle scene. Once I started doing this stuff I was already in L.A. There are a ton of talented people. One guy that I really like is Raz Simone. He’s got a raw and very exposed element to his music. He’s out there really putting his soul out in everything he does and it’s really cool to see. The whole Macklemore thing always comes up because everyone thinks that everyone is trying to go in the same lane because Macklemore is from Seattle but it’s really not like that. There are so many different eclectic mixes of it. There are people with maybe a little more general accessible sound, there is a lot of live band Hip-Hop, there are people on street Hip-Hop, and there’s some abstract stuff. It’s cool, man. It’s a pretty eclectic scene, way more than a lot of people think would even be in Seattle.

TRHH: ‘The Story’ was cleverly put together. What inspired that song?

Nick Weaver: The sample is an old Simon & Garfunkel song, ‘America’, and it just felt nostalgic. It felt old school but I didn’t want to rap about something generic like how good of a rapper I was. I didn’t want it to be too deep because a lot of the album is deep and serious. I was going through my old CD case and the beat was playing so I said, “You should just write about this like a story. Talk about when you were growing up.” The whole thing is the story never changes so the first verse is me talking about being a kid listening to all the rappers that I told you about. The second verse is me as an adult and music is there. I’m talking about listening to Big Boi’s ‘Ascending’ in the car and stressing out about my dad. I’m listening to Kendrick’s ‘Bitch, Don’t Kill My Vibe’ while I’m stressing out in L.A. traffic. The story just never changes. Music is always there and always has a presence.

TRHH: The Platter video was dope. Who came up with the concept?

Nick Weaver: I started writing that verse and I wasn’t even thinking about writing like a cooking show. I started saying, “Take a glass of heartbreak, a pinch of unrequited love…” and I just started going on this tangent about what kind of ingredients you need. Then I started thinking, well shit I should make this song specifically to be a video and it would be funny to make it a cooking show. I took it to my buddy in L.A. Mike Peer who is a great director and he saw the vision all the way through. He picked the perfect scenario, scene, and all the stuff for me to be doing on camera. It was a cool one. I was pretty psyched about that.

Nick Weaver: It took me over a year to get between Day One, None and Yardwork. I put out basically nothing in between that. I’ve made a big commitment to myself to change that. This year is all about putting out as much as I can that’s good quality music. I want to stay in the picture and the peripheral of the blogs and the music fans. I really want to lock in some big Seattle shows with some big names. Hopefully I can lock in some shows with some national acts. Ultimately it would be really dope whether I do it on my own or jump on with another larger Seattle act that’s doing it, but a small regional tour that did the whole I-5 thing and went from Seattle all the way to L.A. or San Diego and back. Music is tough, man. I’m sure you talk to plenty of artists who bitch and whine about this to some degree. When you get behind, you get really behind. You go out of the conversation and it gets discouraging. It’s funny you asked about goals because a lot of times you don’t set goals. You just go forward with what you’re trying to do. In short, that’s what I’m trying to do for 2015.

Sherron Shabazz is a freelance writer with an intense passion for Hip-Hop culture. Sherron is your quintessential Hip-Hop snob, seeking to advance the future of the culture while fondly remembering its past.
View all posts by Sherron Shabazz →
This entry was posted in interview and tagged Day One None, download, EP, free, interview, Nick Weaver, Seattle, The Platter, The Story, Yardwork. Bookmark the permalink.