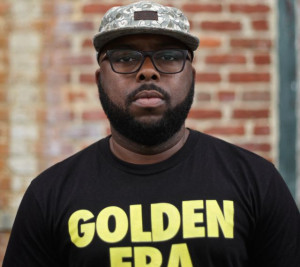 Virginia emcee Awon has been on a hot streak as of late. Following the 2013 joint album with producer Phoniks, Return to the Golden Era, Awon joined forces with fellow Virginian emcee Dephlow for the 2014 album, Dephacation. Both projects produced enough buzz to give Awon’s music a few more ears and more opportunities.

The Real Hip-Hop spoke to Awon about his new album, Matte Black Soul, the formation of Don’t Sleep Records, and the upcoming sequel to the critically acclaimed album, Return to the Golden Era.

TRHH: I was surprised that you dropped this record so soon after Dephacation. Why’d you decide to drop it so close?

Awon: Well, I look at each thing that we do as a different entity. It’s not necessarily about sales and notoriety as it is about getting music out to the audience that I feel like they’ll vibe to at that particular time. I had been working on the project for a couple of years off and on. It was something I’d pick up in my spare time and set it down. After it was all said and done then Phoniks got his hands on it and we felt like it was the perfect time for it to come out. It was wintertime and cold in most of the country, and there are some social issues going on so the reason why we put it out was timing. If not now then we’re not going to have another opportunity. It’s that window right now.

TRHH: Explain the title of the new album.

Awon: Matte Black Soul was what we came up with. Initially it was “Matte Black” and what we realized after going through everything was it had a soulful feel to it so we wanted to prepare the listener for what they were about to hear. When I think of matte black I think of technology and how our devices are matte black. They use it now as a sign of luxury. You got luxury watches that are matte black. It gives an air of elegance and sophistication along with some nostalgia. When something is matte and not finished it gives an essence of that antique feel – especially when you see a car in that color. That’s where it came from, more maturity, sophistication, elegance and the sound is the soul. That’s why we ran with Matte Black Soul.

TRHH: The vibe of the album is upbeat. That wasn’t a conscious effort to make it that way, right? It just kind of felt soulful to you?

Awon: Yeah it felt soulful and passionate. The fact that I recorded that album on my own and worked on it in my own time and my own zone really made it stand out to me where I can feel free to take as much time as I wanted on the record. I wasn’t on the clock in the studio. I wasn’t on somebody else’s time. It was at my home studio and I really got to vibe with it. A lot of it was the mood that I was in. I recorded a lot of those records late at night – after I had company or after I had a good night. All of those records were done after I was hanging out and partying with my friends so that’s the energy that I carried on after the night ended and it carried on to the records.

TRHH: You produced some songs on this album. I wasn’t aware that you made beats. What equipment did you use?

Awon: Well I wouldn’t call myself a producer as much as I just hear certain things and utilize them. I’m using all software. Everything I do is done with Garage Band and Logic. It’s basically taking loops, adding drums, filters, and stripping the track down – nothing spectacular. I do like to get my hands on the production aspect of records, even down to picking samples. Certain records we’ll use because I just like that record in general. Somebody might have used it but they didn’t use it this way. You always hear something different.

Awon: Actually my wife. It kind of just outlines the ups and down and funny things in a relationship. I just decided to write something that was fun and upbeat and almost had a comical satire to it. Usually songs like that are real emotional or vulgar in the sense of being degrading. I just wanted to do something that was a little more fun and take a lighthearted spin on it while poking fun at myself at the same time. It’s inspired by the relationship I have with my wife and that’s why I wrote it. That’s one of the first songs that I recorded for the record.

TRHH: What did she think of the song?

Awon: Oh, she loves it! She thinks it’s incredible. We sit back and laugh about it a lot. To be honest having her around is a great measure just by having somebody to critique your work. She gets to hear everything first so in actuality she kind of co-produced it by saying, “You should do this, you should leave that off,” and it worked out. Her playlist is what made the album so I definitely appreciate her for that.

TRHH: The song ‘Free Your Mind’ had the dope Richard Pryor intro on it. How’d that song come together?

Awon: That song is produced by one of my best friends Rashard. I actually found that intro from the Wattstax record where they had the big concert for the Watts movement back in Cali. That was a big thing so I said let me grab that because what he said was profound to me. I remember someone telling me that Richard Pryor just wanted people to take him seriously. In his comedy he put a lot of social issues that were provocative for the time but the comedy out-shined what he was doing. That was one of the instances where he said something incredible but nobody caught it because everybody is laughing. If you listen to the rest of the record you hear the crowd going hysterical. I thought for this time that people wouldn’t be laughing because it is an instance that we are faced with right now that’s in the media that we talk about. It goes into a greater sentiment in the song where there are a lot of stereotypes that are running at us – stereotypes that I hear, stereotypes that some of us may believe. It’s a respectability politics kind of standpoint that I’m coming at, but in the end of that record I denounce the word but I also admit that we’re programmed and conditioned to use it. At the end of the day who can we point the finger at? It’s also a play on A Tribe Called Quest’s ‘Sucka Nigga’. What Q-Tip did was incredible for that record. It was before its time. Twenty some odd years later we’re still having the same debate. That record really came about from the debate that different generations have about the use of the word, the stereotypes that go along with the word, and how it affects our community.

TRHH: Talk about the formation of Don’t Sleep Records.

Awon: Phoniks and I wanted to put records out and instead of it always being our name with no label we wanted our own imprint. We didn’t have an imprint to release music on and we don’t have a desire to sign to a major label or seek a record deal. It’s really pointless at this point and time. We look at what we do as collaborations when we work with another independent label to produce vinyl or another release. We just wanted to have an imprint that we could put our music out and music that we felt fell under the same umbrella of what we’re doing. Another project we have in line is with a young brother by the name of Peebs The Prophet and a producer from Budapest, Hungary, BluntOne. We feel like it’s the type of music that we like, it definitely fits in to what we’ve already done, and we just want to give these brothers a platform so that they can be heard and we can spread some light on what they’re doing. Hopefully we’ll continue to put our own music and music of other artists out on the banner when the time is right. We’re just growing it slowly and taking it day by day to help it expand. The goal is not necessarily monetary as opposed to ownership. A lot of people only think about monetary value as opposed to ownership, which is monetary value when you own it. That’s where we’re at right now. We don’t want nobody owning us.

TRHH: What’s the status of the follow-up to Return to the Golden Era?

Awon: That’s actually in the works. Phoniks came to Virginia over the summer and we recorded quite a few records at a studio in Richmond. We recorded directly to tape because we wanted to continue with the warm feel of our music. Since we had a couple dollars in our pockets we decided to go to an analog studio where they can make that possible. We plan on reconvening this April and finishing up some more records and keeping the process going. We’re hoping that by the summer or early fall that the album will be finished and we’ll be prepping on that release for everybody to have that proper follow-up.

Sherron Shabazz is a freelance writer with an intense passion for Hip-Hop culture. Sherron is your quintessential Hip-Hop snob, seeking to advance the future of the culture while fondly remembering its past.
View all posts by Sherron Shabazz →
This entry was posted in interview and tagged Awon, Dephacation, Don’t Sleep Records, Free Your Mind, interview, Matte Black Soul, Natural High, Phoniks. Bookmark the permalink.