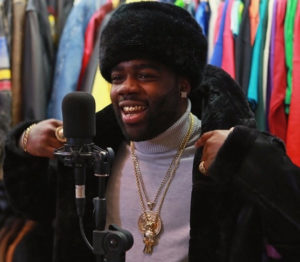 Niagara Falls, NY emcee Jamal Gasol has been known to partake in some greenery. I mean, the name of his label is Piff Music. It comes as no surprise that Jamal headed west to the first state to legalize medical marijuana not only to smoke, but to work on a little music.

Jamal Gasol teamed up with the production duo of JR and Noy, also known as DirtyDiggs, for an EP titled “100 Blunts in Venice.” The 5-track EP features appearances by Planet Asia and Flashius Clayton.

Jamal Gasol spoke to The Real Hip-Hop about the possibility of being bi-coastal, working with DirtyDiggs, and their new EP, 100 Blunts in Venice.

TRHH: Did you really smoke 100 blunts in Venice?

TRHH: [Laughs] What was that experience like out there?

Jamal Gasol: That was great. California was a wave. I love California. It’s so relaxing, so smooth, and so peaceful.

TRHH: It is. You seem to really enjoy the Cali life; would you ever consider relocating there?

TRHH: How was doing this project with DirtyDiggs different from doing Gasol Sauce?

Jamal Gasol: It was different from Gasol Sauce just from the strength of we did it in person. Gasol Sauce we did through e-mail. Sauce was in New York City, I’m up top, and JR was in Cali. So, we just sent in the vocals through e-mail. I told JR a few months before we put the project together, “Yo, I wanna do a project with a producer in the studio with them.” I just cancelled a whole project because I didn’t want to do the e-mail thing. I told him, “I’ll just fly to Cali, we’ll work on this project and we’ll drop something for 420.” He was down, I talked to Noy and he was with it, and it just came together on time. Being in the spot together was a great experience.

TRHH: You recorded this EP in a weekend?

Jamal Gasol: Yeah, we did that in two and a half-three days, shot a video and all of that.

TRHH: Were any songs left over from the sessions?

Jamal Gasol: Yeah, me and my boy Sauce got a joint in the cut whenever that bomb drop.

TRHH: You mentioned that you cancelled an e-mail project; are you done completely with sending songs through e-mail?

Jamal Gasol: No, I’m not done completely. I had just did like 4 or 5 projects straight through e-mail. I was getting tired of it. I want to develop real chemistry with other artists and producers in the studio. It’s like I’m working with a robot when we’re doing this whole e-mail thing. I want to be with the person. When you do that, the project sort of gets stalled off. It’s like, “I’ll just go to the computer when I want to work.” Nah, I got the person right here and we’re going to build, collab, and work together. It’s a better feel.

TRHH: You have a joint on the project with Planet Asia called “Cookies.” How did he get involved with that joint?

Jamal Gasol: Well, Planet Asia is my dog. He was out there when I was working on the project and he was down to get on something. He hopped on the track and we just made magic. I took the beat back to the Airbnb, vibed out to the joint, came back with a verse, and we did the track together the next day. I think I did “Fiesta O.G.” that night at 1 in the morning. It was like 4 in the morning in New York.

TRHH: You also recently dropped “Jamal Gasol is the Future” with Manzu Beats and that EP has a little bit of a different sound. What was the process like working with Manzu for that project?

Jamal Gasol: That for example was through e-mail. It was a different feel of beats that he gave me. It was like a futuristic boom bap type of vibe. I got an Adult Swim vibe from it. I felt like we could just rock with that and I’m going to go in here and talk some real shit. I wanna relate to the people. That’s my goal. I want to get the response of, “Word, I feel you.” That’s basically what I went on there and danced with – that realistic shit.

TRHH: Do you have a favorite joint on 100 Blunts?

Jamal Gasol: If I had to pick I would have to say “El Pollo Loco W/ SZA” that joint is fire. The way the track came together was fire.

TRHH: Are you a big SZA fan?

TRHH: Why is that [laughs]?

Jamal Gasol: I think SZA is dope. I’ll be honest, presentation is key. I remember her album cover made me check her out. The joint where she was sitting in the junkyard with the TV’s. And then my shorty was listening to SZA and shit and I was like, “Oh yeah, it’s her, I see!” I just be slow peeking on her IG and like a picture every two months. I just tap in with her and breeze. I don’t wanna seem thirsty [laughs].

TRHH: What’s next up for Jamal Gasol?

Sherron Shabazz is a freelance writer with an intense passion for Hip-Hop culture. Sherron is your quintessential Hip-Hop snob, seeking to advance the future of the culture while fondly remembering its past.
View all posts by Sherron Shabazz →
This entry was posted in interview and tagged 100 Blunts in Venice, California, Cookies, DirtyDiggs, interview, Italy, Jamal Gasol, Jamal Gasol & DirtyDiggs, Jamal Gasol is the Future, JR, Los Angeles, ManzuBeats, New York, Niagara Falls, Noy, Piff Empire. Bookmark the permalink.