Jamo Gang: All Eyes On Us 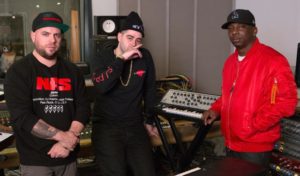 Jamo Gang is a super-group comprised of producer J57, emcee El Gant, and legendary lyricist Ras Kass. Co-signed by the one and only DJ Premier, the group appears to be destined for greatness. Their sound has hints of golden era 90s Hip-Hop, with Ras Kass’ West Coast influence, and contemporary conversation.

The Real Hip-Hop spoke to Jamo Gang about the group’s formation, why their new EP was offered to fans for free, and their upcoming full-length album.

TRHH: How did you guys come together to form Jamo Gang?

El Gant: Me and Ras had been friends for quite some time and were starting to do more work together recording and touring. I had known J57 for years, and wanted the two to meet up thinking that Ras would work well with J57. Two years ago, when Ras was in town, J invited us on the set of a Method Man video “Purple Tape” that J had produced. After all hanging out there, we decided to go in the studio the next day and listen to some beats. The chemistry was automatic; we recorded two dope songs that day alone and knew we should work together.

TRHH: How did the name “Jamo Gang” come about?

Ras Kass: A bottle of Jameson had made it’s way into the room during that first session. We kept joking about it, and the following day I was doing an interview on Statik Selektah’s show when he asked what I was working on. I quickly replied “The Jamo Gang!” The rest is history.

TRHH: What was the process like recording the album with you guys on different coasts?

J57: Being that we worked together so well, and Ras and Gant are such professionals, it was very smooth. I would send beats out, and they would just start buzzing with ideas, and recording demos and sending them, I would then start arranging and accenting my production around various concepts. We would then meet in NYC a few times to put everything together. The last time we met to finish the album it was electric!

TRHH: What inspired the song “All Eyes On Us“?

El Gant: We were talking about how in this day and age, you can be a voyeur for almost everything. Between IG stories, prior to that Periscope, people are so engaged with what’s going on in other people’s lives, that they often don’t look at their own. We just wanted to let the world know “The Jamo Gang is here, All Eyes on Us!” while also emphasizing to look up from your screen once in a while and look around at life.

TRHH: On the song “’Here We Go Again’ Ras said, ‘Why the hottest rappers out so average?’” Explain that line.

Ras Kass: I said it in the next line “’Cause majors hate it, when you civilize a savage.” Labels love pushing “safe” artists that don’t push the envelope. It makes what they’re marketing to you that much easier to push. They don’t want you thinking too much, because when you’re too busy thinking, you have less time for consuming.

TRHH: Why did you decide to put the Jamo Gang EP out for free?

J57: We wanted the world to know we exist and we thought the best way to do that was showing you what we have first. You may have heard of us separately, but together we are a force! The world deserved some good free music, and we weren’t going to deny them of that.

TRHH: When will we hear the full-length Jamo Gang album?

El Gant: It is almost done, and we will be releasing the first single from it this summer. We can’t wait till you hear it, it has a few amazing guests on it. We call it high caliber Hip-Hop – beats and lyrics at its finest!

Sherron Shabazz is a freelance writer with an intense passion for Hip-Hop culture. Sherron is your quintessential Hip-Hop snob, seeking to advance the future of the culture while fondly remembering its past.
View all posts by Sherron Shabazz →
This entry was posted in interview and tagged All Eyes On Us, Brooklyn, California, Carson, El Gant, Here We Go Again, interview, J57, Jamo Gang, Jamo Gang EP, New York, Ras Kass. Bookmark the permalink.