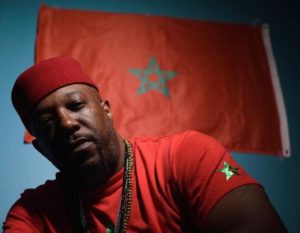 The Medulla Oblongata is the part of the brain that deals with breathing, blood pressure, and heart rate – the things that keep us going. The medulla is essential in functions that most of us rarely think of. Coney Island emcee Kil Ripkin wants to make us aware of more than what is on the surface with his new album titled, “M.O.R. (Medulla Oblongata Rap).”

Kil Ripkin spoke to The Real Hip-Hop about his relationship with Torae, how he got involved with the Moorish Science Temple of America, and his new album, M.O.R. (Medulla Oblongata Rap).

Kil Ripkin: In my study of the sciences one of my teachers always said the mouth of God is the medulla oblongata. All of your thoughts and your intentions come from the medulla first and then it manifests. I figure what better way to title the album then for it to come through the medulla. That’s why if you look at the logo I have the speaker on there because everything is coming from there. That was the reasoning for the title of the album and I used the acronym “M.O.R.” playing on my Moorish American lifestyle, which pretty much every song reflects.

TRHH: How did you get involved in the Moorish Science Temple and how does your faith influence your music?

Kil Ripkin: I’ve been into the study of the science, metaphysical, spiritual culture and things like that for over twenty years now. I had a teacher who passed a few years back, sister Myra El, she was a Moor. I started off learning stuff like the zodiac and metaphysics. My first introduction came through that, aside from things that I might have read prior to that. I’m also really good friends with Don Newkirk. He’s like a big brother and a mentor to me. His bigger brother dealt into the science and he was also a big influence. It’s just something that’s been a part of my life for the last twenty-something years. How I implement it into my music, I mean that’s my lifestyle. Ever since I really started rhyming I always try to rhyme about things that I do, I relate to, or are immediately around me. What better way to express that on this Medulla Oblongata album than from my present lifestyle. I try to mix the music in with my personal life and create Hip-Hop I feel like people relate better that way.

TRHH: You talk about mixing your life with the music, on the album there’s a song called “Room for 2.” Is that based on a true story?

Kil Ripkin: It is. Not necessarily mine. When you talk about the Moorish lifestyle polygamy is an avid thing that is discussed or lived. Three very close brothers of mine were going through this experience and they would share their stories with me. I’ve been with my wife for a very long time – almost 25 years – from babies to grown people. They look at my situation and be like, “How do you do that?” and I’m looking at them like, “How do you do that?” We shared stories and when it came time to do the album and I came up with the idea of doing a song like that, I pulled from their experiences.

Kil Ripkin: A sign of the times. Everything we’re going through now. We’re definitely living in a very chaotic time and moment right now, that’s without a doubt. When you look at the weather, when you look at the oval office, not to harp on him, but everything in the present time is in a very chaotic state. The reasoning for that is we’re actually at a reset moment in time. That’s why a lot of great music is on its way back. A lot of great artistry in general is on its way back. You’re going to see things like the internet and social media controlling things not be as prominent in the artistry as it has been for the last ten years. We’re definitely getting back to the real state of things.

With that being said, we gotta go through some type of chaos to get there. We’ve been going through chaos forever though. Me being a melanated person and knowing that chaos comes from that it’s just easier to relate to. The ghetto, the music, the drugs, the crime, the food, TV, all of that is part of the chaos. When I started constructing the album I wanted to take you through a sequence of things and how it’s being played out. That’s why I start with the fall of man and as we go through the album I am increasingly being more confident with my higher self. That was the message I wanted to bring in this album specifically without losing the Hip-Hop and the essence of being an emcee.

TRHH: Why do you think cerebral rap music in the mainstream is lacking right now?

Kil Ripkin: For one if you and I were to sit down and have a real conversation, I’m talking about real shit — family, things that really affect us as men, it will affect us. You will make an impact on my life. Things that you just shared with me at that moment I can take with me the next day and it can shape and rear me to something different. I think that’s what we’re experiencing now. If I was to be put in a position commercially to really make an impact on our youth, and no disrespect but any one of these young rappers that’s doing their thing right now, I don’t have no beef with that, but the reason they’re allowed to shine is because chaos is reigning supreme right now. That’s a very chaotic production of music, the lyrics are chaotic, and it’s no light in it. That’s one of the reasons why I definitely stay on a higher note when it comes to putting out music.

TRHH: How did the relationship with you and Torae begin?

Kil Ripkin: We grew up in Coney Island. I’m a couple years older than Tor. There was another brother who lived in his building that knew that I did production. I started off as a producer first. I always rhymed, but when I really started getting into the industry I was producing for people, especially out in the Coney Island area of Brooklyn. Torae was one of those young dudes that spit fire in our neighborhood. The brother brought him to me and wanted me to do beats. Our relationship has been a brotherhood ever since.

I’ve known Tor since he was 14-15 years old. We’ve been through each other having children, marriages, career moves, all types of things. That’s my brother first and foremost and we just happened to grow up on Hip-Hop. I started as his producer, he went off and did his thing and we came back together and formed The Coalescence. I consider us still a group, we’re just individually on our own paths. We actually came together to put this album out on his Internal Affairs imprint along with Soulspazm. He’s more of a brother that I happened to grow up doing Hip-Hop with.

TRHH: The song ‘Black Out’ is real interesting. What’s your take on people who find strength and power in identifying themselves as being black?

Kil Ripkin: It depends on what type of conversation I’m in. Obviously when you’re dealing in law, which I always deal with, being black is not something that’s equivalent to a nationality or a bloodline of people. On the song ‘Black Out’ I’m playing on the word “black” and how every time they use that word it’s coming from a negative aspect, but black is beautiful. Through darkness comes light so there’s also good that comes from that. On this album I tried to come from the law aspect and say, “To call yourself ‘black’ as a person living within a government structure you’re saying that you’re dead, you’re saying that your civil rights are dead.”

Basically this is what black means in law and that’s what I tried to play on in the song. I still say “black people” and I don’t actually X that out from my vocabulary, but I’m very careful when I use it. If I use it in a conversation where I’m talking about law and the color of law I gotta be honest in that and say, “We’re not African Americans. We’re not all of these labels they put on us. We’re actually Moorish Americans, everything is in reverse.” without getting too preachy though. I try to stay away from that because I’m still a student. Even though I’m a teacher in my profession and I teach through my ministry which my music is a part of, I’m still a student also.

Kil Ripkin: It’s made for everybody, bro. I’m specifically talking to my Moorish family because there’s messages in there that they can immediately relate to. Now there are going to be people that are going to hear certain things on the album and it’s going to lead them to search for these things and these answers. For the most part the album is for everybody but I’m specifically speaking to the Moorish family, or black, even though I got a lot of my white brothers and family that can relate to it because of their knowledge of what the actual law and science is out here.

Again, I’m not saying that I’m right. That’s not where I’m coming from. This album is definitely coming from a lifestyle that I live every day. Those that are around that see that, this album is for them. And there are those that might be intrigued. From my ministry I get a lot of calls from those that want to know about nationality and things like that and they’re into Hip-Hop. They love Hip-Hop so what better way to get that across to them than Hip-Hop music. Hip-Hop is the easy bridge that makes it easier for them to relate to it behind the dope beat and some ill rhymes.