Posted on October 5, 2020 by Sherron Shabazz 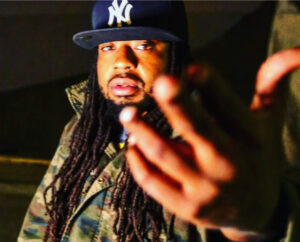 Baltimore emcee  Jay Royale released his debut album “The Ivory Stoop” in 2018. The release was reminiscent of east coast boom bap from the 90s. Two years later, Royale’s sophomore effort “The Baltimore Housing Project” carries on the tradition of presenting raw beats and rhymes to the listener. The album is easily one of the best projects of 2020.

Jay Royale spoke to The Real Hip-Hop about and his Hip-Hop influences, how certain iconic movie scenes correlate with his music, and his new album, The Baltimore Housing Project.

Jay Royale: I named it the Baltimore Housing Project because it’s like a sequel to my first project. My first project was called “The Ivory Stoop.” So, with my titles and artwork I really try to keep it Baltimore-based, being as though I’m from Baltimore. The Baltimore Housing Project is really a play off words, just due to the fact that it is a project. It’s my second project. It’s an audio project, but the temperament, the content, the whole feel and the setting of the album is the project mentality. My first album was called The Ivory Stoop and that was welcoming the listener to Baltimore boom bap Hip-Hop. I felt as though that was the introduction and now that I’ve introduced you and welcomed you in, now we’re in. We’re in the nitty gritty of it, we’re in the middle of it. Now that I introduced the listener in to Baltimore I didn’t want to just show the good side of Baltimore. I wanted to show people the nitty gritty of it too. Here is the good part, and now you’re in the projects.

TRHH: How have you grown as an artist since The Ivory Stoop?

Jay Royale: I’ve grown a lot. I think I know my lane. I’ve developed my own kind of niche and I’ve matured enough to interact with some of the higher ups in Hip-Hop. We reached out for some of the more seasoned guest appearances and the emcees that are on this one, we’re keeping up with them and we knew exactly what we wanted to do. Just laying things out. I feel more groomed as an artist. I felt a lot more comfortable. When we executed, it just felt better.

TRHH: The first single from the album, “Thousand Gram Figero” features Skyzoo, how did that collab come about?

Jay Royale: Everybody is a big fan of Skyzoo. We made a lot of rounds in New York. He was a prominent artist and we knew his insight on indie artists such as ourselves and he bridges the gap. He’s more or less an artist that bridges the gap when it comes to independent artists trying to get ahead or trying to get notoriety in the Hip-Hop scene. We reached out to him, presented him with what we had going, and we gave him the option. We said, “If you like what we’re sending let us know what you want to jump on,” and that was the one. We sent him what we knew he would take to like a fish in water. We knew that he would latch right on and he did. He did well. It was a beautiful thing. I love his verse and he bigs my city up in it. He’s actually in Baltimore a lot, so shout out to Skyzoo.

TRHH: I thought it was dope how you used the movie clips and clips from artists throughout the album, also the cuts. These are elements that artist used to use all the time, now they don’t as much. Why did you decide to include clips and scratches in your music?

Jay Royale: I’m a fan before I’m anything when it comes to Hip-Hop. The fact that I indulge in it and participate in it, I’m a fan first. A lot of the things that I look for in the music that I like, I also like to give off. That’s the energy that we’re putting out there. I want to pull out the most authentic music that I can. A lot of people put me in a category of the golden era of Hip-Hop, and I absolutely adore it. if you put me in that category those are big shoes to fill. I feel like we have to pay respect, pay homage, and give off the rawest, most authentic sound that we can. I feel like with the movie clips, these are movies that we all know and love. Even though we all know and love ‘em, certain scenes apply so much to the reality that we live in when we’re in certain neighborhoods – tougher neighborhoods or better neighborhoods. I feel like certain scenes capture everything that I want to say. Before I had that conversation with you with the song I want you to put yourself in the setting.

So, that movie clip is like, “Okay, we’re here.” We’re in this scene. We’re here together. We might not be the leading actors in the scene, but you know where you are just by hearing the scene. In that scene there was a gun involved, or there was a robbery or a shooting. I want you to you to put yourself into that setting so you can feel it. It’s like rapping in 3-D. I want you to feel where I’m coming from and what better way to captivate the listener than to give off that scene and the passion that certain actors put into that scene. It’s like, “Okay, we’re here now,” so you hear everything. I really feel like the cuts are the third man in the ring. You got your fighters, but those cuts are the third man in the ring. So, it’s like, while the punches are being thrown, this is me saying what I wanna say, but in a way where you have to feel me. I try to take the most potent quotes to me and include them into the film as well.

TRHH: Your sound is modern and boom bap; who inspired your style as an emcee?

Jay Royale: Everybody, man. Like I say, I’m a fan first. We can talk about Nas, AZ, Kool G Rap, Westside Gunn, Conway, a lot of them. Monday I might feel this way, and Tuesday I might feel a way. Pun, Jay-Z, Biggie, Daddy Kane, the greats. The people that had something to say and they had a fire way to convey their rhymes. I’m influenced by a lot. I’m influenced by a lot of dope artists.

TRHH: What’s your favorite joint on The Baltimore Housing Project?

Jay Royale: I have a lot of them. It’s kind of crazy, you know how you’ve got song 1-through-15? As you mix them off and as you’re working on the project, the last studio session, those two tracks, you’re walking around listening to it through your headphones and you’re trying to find everything that’s wrong with it, but in the end, I wanna say “Reefer Clouds.” Reefer Clouds is one of my favorite joints on the project right now. I’ll say that but then I’ll wake up one morning and “Tint Cruddy” with Termanology will be it, and then “Lime” with Willie the Kid. You just never know. It’s subject to switch every five minutes with me. Every morning I have a motivational song that I wake up to, get dressed to, and get started with.

TRHH: Who is The Baltimore Housing Project made for?

Sherron Shabazz is a freelance writer with an intense passion for Hip-Hop culture. Sherron is your quintessential Hip-Hop snob, seeking to advance the future of the culture while fondly remembering its past.
View all posts by Sherron Shabazz →
This entry was posted in interview and tagged Baltimore, interview, Jay Royale, Maryland, Reefer Clouds, The Baltimore Housing Project, The Ivory Stoop, Thousand Gram Figero. Bookmark the permalink.